XIV Summit of Regulators and Operators in Santo Domingo: all about Broadband for Latin-America!

As announced in this Blog , during the last 18-19th of July, the XIV Summit of Regulators and Operators AHCIET REGULATEL was held in Santo Domingo. The...

As announced in this Blog, during the last 18-19th of July, the XIV Summit of Regulators and Operators AHCIET REGULATEL was held in Santo Domingo. The Summit was titled “Broadband: The Challenge for Latin America of inclusion and sustainability of networks” and I had the chance to attend it.

As in previous occasions, the Summit was an excellent opportunity to meet and dialogue with Latin American regulators and telecom operators.

The regulator of the Dominican Republic, Indotel, hosted the Summit, and there was a great turnout both from regulators and operators from throughout the region.

The presentations reflected the main challenges facing the region in relation to the development of broadband services and also the great opportunities that these services bring.   The different points of view from regulators, operators, consultants and other companies in the ICT sector generated interesting debates. 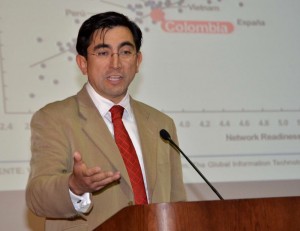 All presentations can be accessed through the website AHCIET.   The Summit began with a presentation by the Minister of ICT Colombia, Diego Molano.  Mr. Molano presented the national broadband plan in Colombia,  “Living Digital Plan” (Plan Vive Digital), which was launched in Colombia in late 2010. This presentation pointed out the positive effect of ICT development and increased penetration of internet access on poverty, unemployment, productivity and economic competitiveness.  Of especial interest were the actions that the Plan contemplates on the demand side (not frequently seen in the region) and the objective of the Ministry focusing on the use of the internet rather than its mere geographic availability (extension of services).

During the Workshop “Infrastructure as a driver of ICT development” international experiences in relation to public policies for infrastructure development were reviewed.  The workshop raised several issues of interest such as the economic benefits that arise via the allocation of the Digital Dividend to mobile telecommunications services. The vision of the regulators and operators on how to foster the deployment of infrastructure in Latin-American was also debated. This analysis revealed a common concern: there is an urgent need to simplify local regulations as they still pose a major obstacle for the deployment of infrastructure particularly concerning mobile networks.

Finally, the Summit ended with the signature of a Declaration of the Summit which established an Action Plan for 2011-2012. This document sets out the activities to be undertaken jointly by both organizations, AHCIET and Regulatel, until the next Summit to be held in 2012.  Telefónica will continue to follow all these initiatives with upmost interest.  Ultimately both regulators and operators share a common objective:  to bring the maximum benefits of Broadband to the Latin-American society.