What do the “campuseros” think about the digital world?

Campus Party and Public Policy teams were very eager to know what the “campuseros” think and expect from the Internet ecosystem. Almost 900 young people answered to our online survey. ... 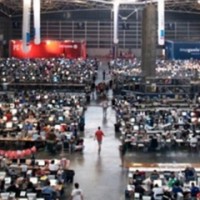 Campus Party and Public Policy teams were very eager to know what the “campuseros” think and expect from the Internet ecosystem. Almost 900 young people answered to our online survey.

Our questionnaire was based on the Telefónica’s Digital Manifesto, precisely to get the direct insights of our young and techy users on the issues we address in our digital public positioning document.

Then we grouped the questions into two areas: Open Agenda and Digital Confidence. The findings were very clarifying. Most of them support the idea of deepening in a more open Internet which means, first and foremost, digital portability and open app stores, platforms, and operating systems. In fact, over 85% believe that Internet services should be interoperable and more than half prefer open operating systems (Firefox, Ubuntu) versus closed ones (iOS, Microsoft). This makes sense when we verify that over 60% have had problems with their applications when migrating from one phone to another.

On the other hand, in an age of sharing we have dedicated a central block of our Digital Manifesto to find out ways to enhance online trust and security. The results are very clear on the user’s concerns and in a certain way surprising: 70% of respondents said to be concerned about the results obtained from the search engines either because the information obtained is not neutral or because it is directly related to previous searches. In some way, people feel that they have lost the control of which information they share and how and when they do it.

Telefónica believes that we should shape a new digital experience in which people could control their personal data (transparency), keep their identity private (privacy, identity and a New Deal on Data) and their data safe (safety and cyber-security). The digital ecosystem cannot flourish when 85% of users are worried about how Internet companies use their personal data.

However, we cannot imagine our daily life without the Internet any more: although more than 50% of respondents feel that the Internet is not secure, none of them want to give up using it. Another interesting finding is that the “campuseros” said that, regarding the use of their data, they rely more on online stores (over 40%) and telecom operators (nearly 40%) than Internet search engines (more than 10%) or social networks (less than 10%).

All these issues are hot topics because the digitalization of societies goes faster than we could imagine. Share with us your opinions  and expectations in the debate on the future of the Internet next Thursday, 25th September in Espacio Fundación Telefónica.