Presentation of the report “Smart Cities: a first step towards the Internet of Things”

Today, Fundación Telefónica is presenting in Barcelona a new report untitled " Smart cities, a first step towards the Internet of Things" (only in Spanish).   As it was explained... 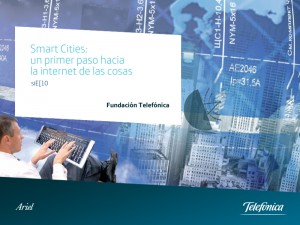 Today, Fundación Telefónica is presenting in Barcelona a new report untitled “Smart cities, a first step towards the Internet of Things” (only in Spanish).

As it was explained in this Blog, cities are key for the social and economic development of their countries, and due to the demographic explosion worldwide, cities need to be in the future more efficient and more sustainable for the benefit of their citizens.

The report explains firstly the specific role of cities for this new century, but also tries to define what a smart city is, what kind of services we could find in it (energy efficiency, security, e-Health, education, culture, e-commerce…) and which technologies are useful for the Smart cities management. It also exposes the potential business models linked to smart cities for every kind of city existing (new cities, changing management cities, small cities…) and the ecosystem they could positively create.

Administrations should grab this opportunity and enter into the “Internet of things” wave for the benefit of their citizens in the very next future.

Fundación Telefónica will present its report today at 18.30 in Torre Telefónica Diagonal, in Barcelona (only in Spanish).

The event can be followed live on the Internet here and also through the Twitter hastag: #ftsmartcities.