Telefónica is turning Spain into the European capital of smart cities

- In Seville, Telefónica is going to help digitalise and transform the mode of operation in the cargo port - Since October 2014, Telefónica has been working in Logroño developing a control centre for public services, such as traffic, street lighting and the 010 citizen information helpline - The smart city project in Valencia is the first smart city platform awarded in Spain that is designed according to the specifications and standards laid out by the European Unions Future Internet architecture - In Santander, services have been developed such as smart parking, environmental monitoring, smart irrigation, augmented reality, smart metering, and traffic intensity monitoring 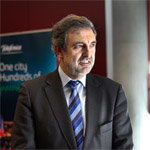 Madrid, 19 November 2014- At the Smart City Expo World Congress in Barcelona Luis Miguel Gilpérez, president of Telefónica España, presented an outline of the projects that Telefónica is undertaking in Spain to transform cities and make them more efficient, responsible, sustainable, and ultimately, smarter. Telefónica is working in cities including Santander, Barcelona, Zaragoza, Malaga, Logroño, Seville and Valencia, alongside various local corporations and other businesses in different areas to make the concept of “smart cities” a reality.

This makes Telefónica the telecommunications operator that is participating in the most smart city projects in Europe, helping these cities to become pioneers in various areas from sustainability and mobility to security and citizen services all greatly improving the way citizens live and work.

Under the slogan ‘one city, hundreds of possibilities”, Telefónica demonstrated at the Smart City Expo a variety of different projects that it is currently working on in this space.

Telefónica explained the way operating a cargo port can be digitalised and transformed based on its work in Seville. Along with the University of Seville and the companies Thales, Portel and Isotro, Telefónica will deploy innovative tools in the city that systematise the relationship between the cargo being carried, the vehicle transporting it and the infrastructure of the port, with the aim of improving logistical efficiency.

In this project, Telefónica will provide a network of multi-technology communication (WiMax, satellite, fibre optic and 4G) that combines the information collected by sensors installed in the containers, vessels, trains and automated traffic management systems alongside a horizontal platform based on FI-WARE standards.  This approach will facilitate the collection, analysis and presentation of the combined information from the different sensors and subsystems that make up the solution.

Since October 2014, Telefónica has been working on a project in Logroño to centralise traffic, street lighting and the 010 citizen information helpline public services, feeding the information into a smart city platform named Plataforma Smart, which was also on show in Barcelona.

Telefónica’s smart city work in Valencia is the first project awarded in Spain that is designed according to the specifications and standards laid out by the European Union’s Future Internet (FI-WARE) architecture. Telefonica’s smart cities platform enables Valencia to undergo the process of transformation of urban services and apply open data policies that favour the establishment of open and participatory innovation processes.

In Zaragoza, in collaboration with the local transport consortium, Telefónica has begun to implement the “Smart Steps” platform. The project consists of extracting and analysing data, on an anonymous and aggregated basis, in order to learn more about population movements allowing relevant bodies to optimise transport through smart planning to provide citizens with better and more efficient services.

A similar approach has been taken in Barcelona where anonymous and aggregated information about tourists who visit the city is used to learn about the wider tourism trends and the types of people the city attracts. With the insights gained from this data, better services can be offered to tourists and the overall city experience can be adapted to their needs.

Smart Santander was a pioneering project for Telefónica in Spain. The project was financed by the European Commission, and Santander became a benchmark for large smart cities in terms of both the infrastructure and smart city platform developed, which easily enabled experimentation and research. As a result of the project Santander services have been developed such as smart parking, environmental monitoring, smart irrigation, augmented reality, smart metering, and traffic intensity monitoring.

Other initiatives that Telefónica presented during the Smart Cities Expo was the management pilot of street lighting by the Malaga local council, the solution for energy efficiency in buildings with the government of Cantabria, the Open Data platform by the Santander city council, and a transport NFC payments platform developed by the Asturias Transport Consortium.

According to Luis Miguel Gilpérez, ‘in Telefónica, we believe that people, businesses, cities and society can be more and do more thanks to technology. We all know how technology has changed, and will continue to change, our way of living and working. The digital revolution has not only transfomed the way in which we communicate, but is also changing and will further transform the relationship of cities with their inhabitants. We want to contribute to this change too, and for this reason, we are working with the local councils of Malaga, Seville, Logroño, Zaragoza, Barcelona, Valencia and Santander, among others, to lead this new industrial revolution in cities’.

Blog
#Technological revolution
Xenobots: a new way forward for robotics
Blog
#NFC
What is NFC and what is it used for
Blog
#5G
When will 6G arrive and what progress will it bring?