Reaching the benefits of the Data Economy

Telefonica participates in a High-level conference on Data Economy organised by the Government of Finland to find solutions for a sustainable, competitive and human-driven economy.

The Government of Finland organises a High-Level Conference on Data Economy to find solutions and define principles for a sustainable, competitive and human-driven economy. Telefonica was invited to present its ideas and knowledge in the panel “Reaching the benefits of the Data Economy”, in which Enrique Medina, Chief Policy Officer at Telefónica S.A,  participated on Monday 25th of November.

The Conference is the most important event held under Finland’s presidency of the Council of European Union and have brought together an influential group of 400 high-level attendees representing the EU member states and EU institutions, business and economy as well as the civil society to discuss and shape the principles for future development of European data economy. 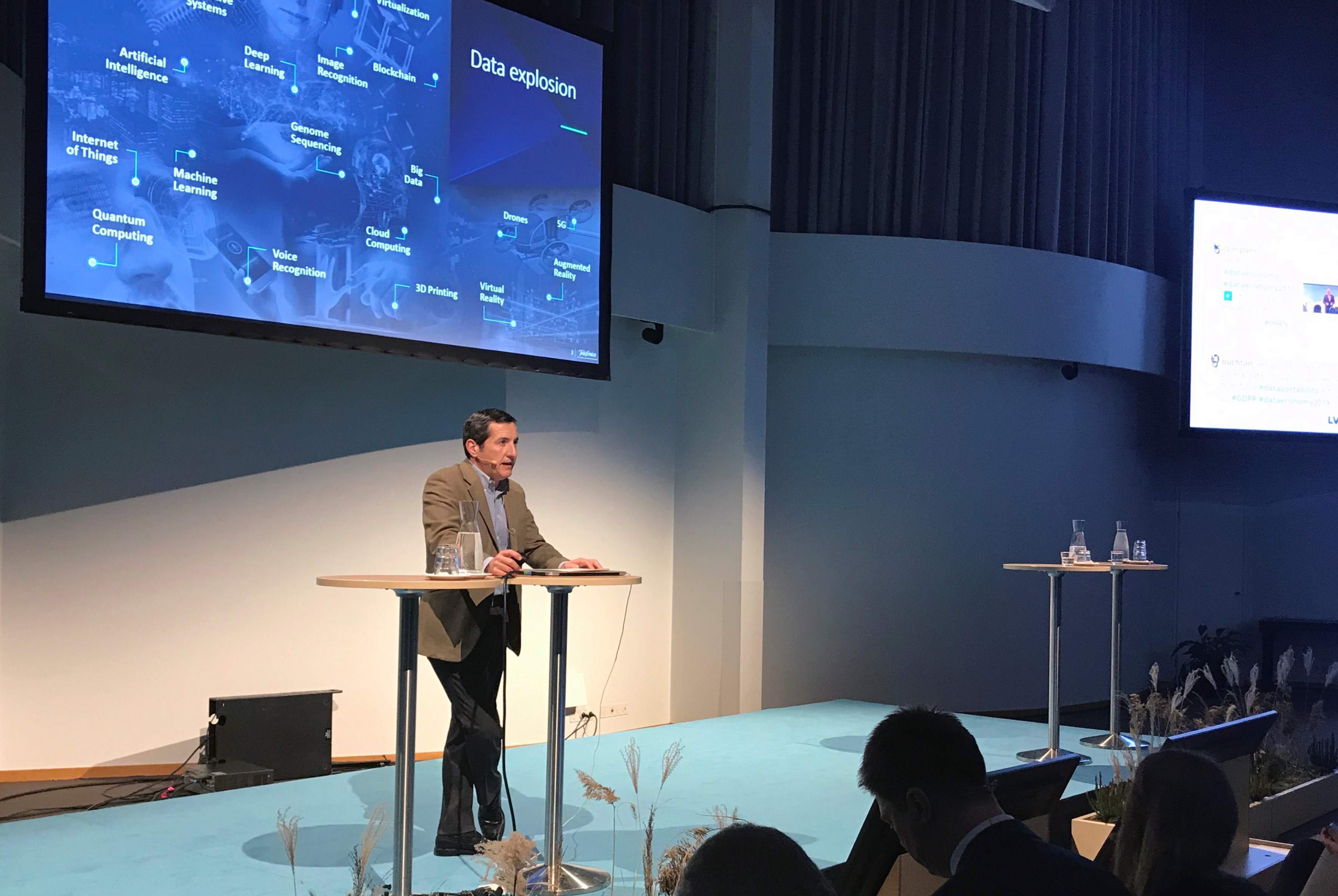 Telefónica’s takeaways on a fair and transparent use of data

Data is revolutionizing the world we know. We cannot deny that we are living a silent revolution that is transforming everything. The data economy offers a wide range of important opportunities for European progress, but also a series of risks, especially for the individual sphere, which we must mitigate.

The European Commission has stated that by 2025 the data economy of the EU-27 is likely to provide 5.4% of its GDP (equivalent to €544 Million). However, more than 50% of this data traffic that flows through the network is not human anymore. And among 27% of that half is bad botnets, fishing, cybercrime, but we don’t see it. Recent episodes about the way data has been collected, storage and used by some companies has raised the urgent need to face ethical debates because of the significant impact they have had over human rights.

In this regard, Europe is leading the way we should approach to processing all that personal data that is shared through the networks. GDPR has been a very important step in building confidence but it alone is not enough. Organisations must ensure that tell individuals about data processing in a way that is easily accessible and easy to understand.

We have an enormous opportunity that we can’t afford to lose, and the telco industry will play a relevant role for a Data Economy with values to succeed. Nevertheless, the reality in Europe is that the telco industry is very fragmented. There are 450 mobile operators in Europe, so there is almost one mobile operator per million customers.  On the contrary, there are three in China and four in the US. There is excessive competition and most of the times, there are artificial competition, asymmetric market power. Despite these barriers, the telecommunications sector is 5% of GDP. We employ more than one million people and we pay an average tax rate of 23%.

We are here, we are established, and we are on the ground, but we need to enable European companies to compete at scale within the European Union but also globally. Europe needs stronger telecommunication players. 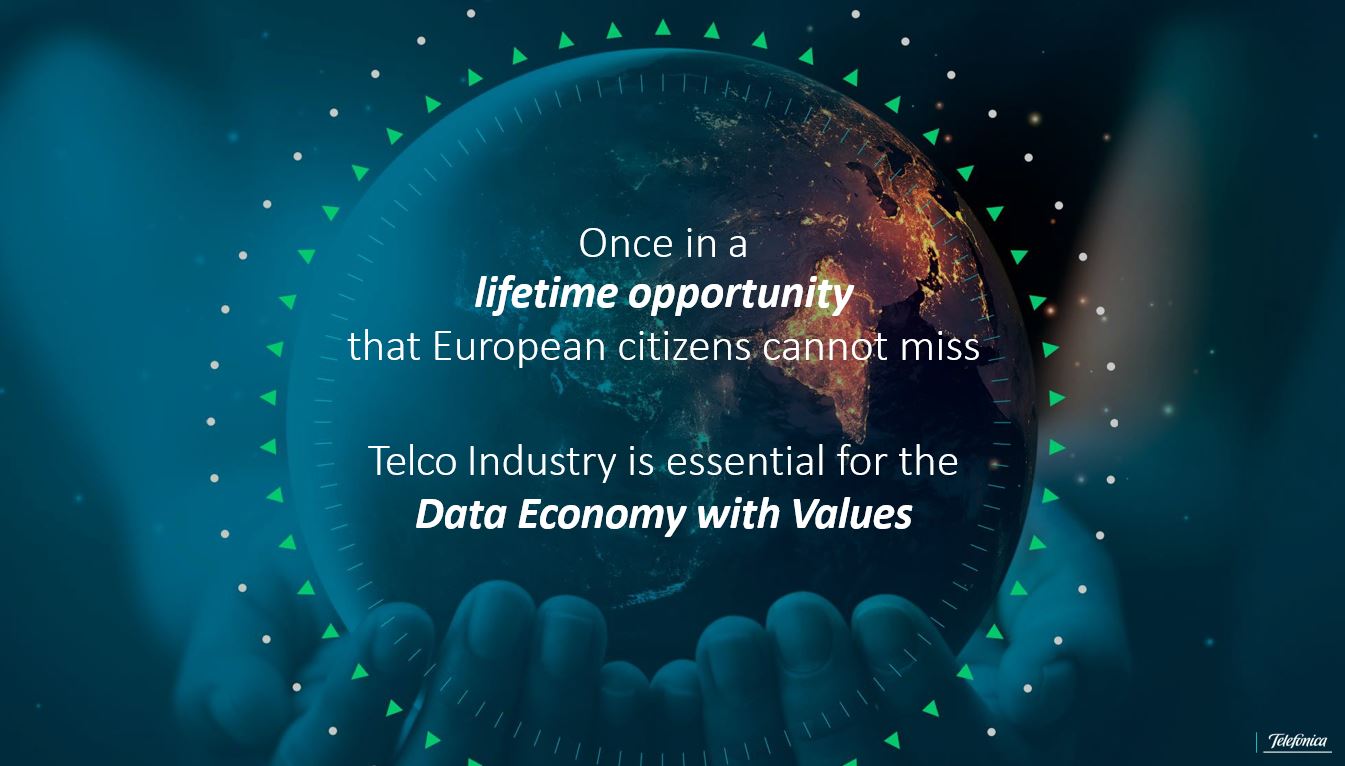 We are living in a digital transition moment and we have the chance to decide how we want it to be. Europe has a unique opportunity to successfully undertake the digital transition and we must do so based on historically shared and defended common values, values which are now even more important than ever.

For this reason, last year we launched Telefónica’s public position known as the Manifesto for a New Digital Deal where we highlight some principles for putting people at the center of digitalization and digital economy. These principles are: fairness and not discrimination, inclusiveness, responsibility, accountability, transparency and choice.

Additionally, Telefónica has been one of the first companies in the world to released (last October 2018) its Artificial Intelligence Principles to guarantee a positive impact on society. We are committed to designing, developing and using AI with integrity and transparency to make sure we take on the benefits and challenges of technology in and ethical and responsible way within our entire organization.

We have also signed a series of agreements and alliances with third parties to put into practice some of the ideas contained both in our Digital Manifesto and our AI principles. For instance, we have an alliance with the Food and Agriculture Organization of United Nations (FAO) to work together to leverage the use of cutting-edge digital technologies for agricultural development, food security and nutrition. Besides, we are working with GSMA to harness mobile network data to help combat the health impact of air pollution in cities.

Another initiative focused in Latin America in which we are participating is fAIrLAC, a regional initiative led by the Interamerican Development Bank (IDB), the private sector and the civil society working together to ensure the responsible and widespread adoption of Artificial Intelligence in Latin America and the Caribbean. Back in Europe, Telefónica has contributed in the elaboration of the Ethics guidelines for trustworthy AI, since this document is completely aligned with our abovementioned AI Principles.

“Europe has always championed values. It is not the age of technology, but rather the age of humanity”

At Telefónica, we want to empower customers, since we believe the digitalization should be accompanied by new and responsible data ethics where choice and transparency must help to put people in control over their data. We need to ensure that people are the primary beneficiaries and feel in control. We need to assure a human-centric digital transition, and this is our proposal: