As announced on this blog in a previous post , international experts on smart sustainable cities met last week during the third ITU Green Standards Week (GSW) , held at Telefónica ’s... 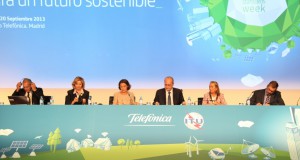 As announced on this blog in a previous post, international experts on smart sustainable cities met last week during the third ITU Green Standards Week (GSW), held at Telefónica’s headquarters in Madrid, to respond to major questions about smart cities and to accelerate their development.

Are people in a smart city happier?

This is possible because they can live better.  The focus of smart cities has to be its citizens.  This is where the concept of sustainable comes in. Therefore, we would speak about smart cities, with technology in the center, and sustainable, which contribute to economic, social, environmental and technological development, as Carlos López Blanco, Global Director of Public and Corporate Affairs at Telefónica has indicated.

Smart services can make our cities safer, more efficient, cleaner and suitable for living, as Malcolm Johnson, Director of the Office of Standardization in Telecommunications at the ITU has pointed out

For Eliseo Trasobares, Director of Marketing and Solutions at Huawei Enterprises: the Smart Cities model is based on a safe and ordered society, a healthy and happy life, and a ‘green’ and sustainable economy.

What is the role of technologies in smart sustainable cities?

The development of a smart city requires the creation of intelligent services based on interoperable data and in real time in an efficient manner. In this way, intensive use of Information and Communication Technologies (ICT) allows current urban services to be optimized and others to be generated in such new areas as mobility, energy and the environment, the local economy, the government of the city and the quality of life of its citizens

From a technological point of view, a horizontal platform common to several intelligent services is key for developing a smart city in a sustainable manner.

How do you know whether a city is a smart city?  Are there degrees of measurement?

Nowadays, it is difficult to say. There are an infinite number of cities that are implementing intelligent services in some aspect  – mobility or transport, healthcare, energy and other resources, education…-. However, there has to be some system of measurement. The Focus Group on Intelligent Sustainable Cities being promoted by the ITU and presided by Telefónica is working to define indicators for energy savings, water, waste, etc. that are generated in a smart city. The goal is to have these indicators towards the end of 2013.

We are in an economic crisis… Is a huge investment required in order to become a smart city?

The idea –according to José Luis Diaz Huber, Manager of Smart Cities at Telefónica España– is not to increase public spending, rather to reorganize it and to take advantage of existing technologies to derive maximum benefit for the city connected.  In short, it involves putting technology at the service of the city’s strategy.

A good example of this is the city of Logroño, which is focusing on a technology platform that integrates all its communication networks to increase their use.  It will serve both the lighting network and also be used for managing traffic and checking air pollution, explained the mayor, Concepción Gamarra, who is also Vice-President of RECI (the Spanish Smart City Network).

Both Diaz as well as representatives from companies such as Huawei and Ericsson and entities such as Red.es have stressed the importance of the cloud for bringing progress within reach of smaller cities.

Moreover, several speakers have indicated that smart cities promote economic growth because they involve many companies and promote the creation of jobs, for example, in the field of development of ICT applications and big data.

In addition, smart services generate cost-savings: with smart building solutions, you can save up to 30% on electricity bills, up to 50% with smart lighting and between 30% and 50% with intelligent irrigation systems. In this respect, the mayor of Málaga, Francisco de la Torre, is clear about the “Málaga Smart” strategy:  preferably use ICTs to improve management, reduce costs for providing services and create value for citizens.

To go further with less, as Mayor Gamarra said, standards are required to replicate these experiences with ease and in anywhere in the world and to obtain a return on investments.

European financing is also involved.  As Mercè Griera, a scientist who is working on smart city topics at the European Commission recalled, we have the Horizon 2020 programme.

Who has to promote this type of cities?

The work is based on the collaboration of the Municipalities in the private sector (ICT sector, transportation, construction, utilities, etc.), an area where there is still much work that needs to be accomplished.

What are the challenges?

Standardization, for example, measuring through standardized indicators for all cities; interoperability of all technologies; security and privacy; digital inclusion so that no one misses out on progress which is fundamental, for example, in Latin America; or the use of information, for example, to anticipate problems. “Yesterday’s data is useless, tomorrow’s data is what counts”, said Javier Gil, from IBM. Hence, for example, the importance of big data.

To this can be added, in the case of Latin America, the exchange of best practices, as Pablo Bello, AHCIET Secretary General, highlighted. To do this –he said- we have to envisage creating a network of smart cities in the region. Pernilla Bergmark, a researcher at Ericsson, also stressed the importance of sharing success stories.

Next smart cities event: XIV Latin American Meeting on Digital Cities, 25 and 26 September, to be held in Quito, Ecuador.

This post has been originally published in Spanish in the Telefónica’s Sustainability and CR blog.