The ninth Internet Governance Forum (IGF) took place from 1-5 September in Istanbul under the overarching theme of ‘Connecting Continents for Enhanced Multistakeholder Internet... 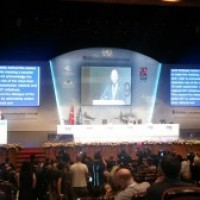 The ninth Internet Governance Forum (IGF) took place from 1-5 September in Istanbul under the overarching theme of ‘Connecting Continents for Enhanced Multistakeholder Internet Governance’. With 2,374 onsite participants and 1163 remote, this IGF can be considered as the most attended ever.

The community submitted more than 200 workshop proposals, which were distributed according to the following subthemes

New in this edition were the five Best Practice Forums on

Interested parties prepared the related Focus Sessions well in advance with good results in terms of debates and vivid exchange of ideas among participants. Even if the idea of these Best Practice Forums was launched with not so much time to organize and prepare, I think the experience has been positive and could be used in future editions. However we need clear “rules of engagement”, transparent working methods and defined and predictable objectives to better cover community expectations.

Before the official opening of the IGF, the Turkish government hosted a high level meeting on capacity building for economic development. Twenty-one high level leaders, including government ministers presented their views on this issue. In parallel, there was an interesting day-long follow-up event to the NETmundial in Sao Paulo: “NETmundial: Looking Back, Learning Lessons and Mapping the Road Ahead”, where outputs, working methods, statistics and ideas on institutional improvements to the Global Internet Governance Ecosystem where discussed.

IGF in Istanbul is another step in the series of events that have made this 2014 pivotal for the definition of the future Internet Governance system. The NETmundial meeting in April, the U.S. government’s announcement on the IANA transition to global community, the World Summit on Information Society Review (WSIS+10) High Level Event and the NETmundial Initiative launched by ICANN and WEF in August, among others, have served as warm ups for Istanbul and most of the conversations along corridors have been devoted to their outputs, expectations and influence on the IGF.

The future of this forum, the ideas on how to improve it and the ways on how to finance and extend its mandate were some of the main points of discussion. There was a general agreement that the IGF should continue after its current mandate finishes in 2015.

A multistakeholder group of participants drafted a request to the United Nations to extend the IGF mandate and to secure its multistakeholder character. This letter is open for signature at http://www.IGFcontinuity.org.

Behind this request there is a clear desire of avoiding the instability that has been connected to the previous five year mandates of the Forum, but also I think, a call for maintaining its character. There have been voices against some ideas of merging WSIS Forum and IGF on the one side (something which will destroy its multistakeholder nature) but also against IGF been replaced by the new NETmundial Initiative promoted by WEF and ICANN. This Initiative is seen by some as an only business-lead forum, not really inclusive and following a top-down approach to which the Internet community is not used to. We hope both could live together, complementing each other and cooperating to better serve the needs of the community. NETmundial Initiative, if run in a transparent and inclusive way, could act as a catalyzer for the participation of other economic sectors not included in the ICT industry but anyhow affected in a way or another by the Internet Governance discussions.

Regarding ideas on how to improve the IGF, I would like to mention some of the most heard during these days in Istanbul. One of them is the need to better organize intersessional work in the so called Best Practice Forums, a new modality of work presented in this Istanbul edition. We think such forums can be very positive to prepare discussions for the annual IGF editions, taking into account the voices and opinions of all stakeholders in a transparent way. Even if we don’t expect IGFs to produce any kind of recommendations, this intersessional work could help in elaborating basic discussion documents and in creating networks of interested parties where contrast of legitimate interests and free flow of ideas can serve as foundations for durable solutions.

Another is the how to ensure that outputs from the IGF (in the more general meaning of “output” understood as lessons, working methods, ideas, etc.) are translated into action in other fora while preserving, at the same time, the character of the IGF as a platform for open dialogue.

I would also underline the idea of having in future editions greater involvement of not only ministries in charge of IT/telecom but also of economy, education, health, etc. Some voices also asked for the presence of not only governments but also opposing political parties in order to get a more complete vision of the reality.

Finally, a concrete initiative was launched by ISOC to help the IGF in achieving a stable and sustainable funding as well as support national and regional IGFs development and activities (more information is available at http://www.igfsa.org).

During the four days of the IGF many subjects where covered. Perhaps the most interesting for Telefónica was the Net Neutrality debate. Details about it can be found in another post by my colleague Gonzalo López Barajas. Other issues we find interesting to underline are the following:

Digital Trust: The need for a safe and secure cyberspace to enhance the digital confidence of the citizens in the Internet, was the center of many dialogues. The free flow of information and free expression is key but also the creation of a level playing field for all actors. Privacy and data protection should cover all the value chain.

Challenges to the Internet Governance where analyzed during several workshops and the need to solve the knowledge gaps on this issue among different stakeholders and geographies were highlighted. Capacity building and knowledge transfer are key to solve these problems and allow for a meaningful participation of all parties. A stable and sound financing of the IGF secretariat is also needed if we want to have a really productive discussion forum every year. It is important to link multistakeholderism with accountability. Multistakeholder process can have concrete outputs as showed by NETmundial. The secret is to focus discussions in finding common ground, having sound processes and clear and predictable objectives. It is needed to integrate in the IG system other groupings already working to solve the same problems in the analogic world. The IG system must be as distributed and flexible as the Internet is, maintaining good coordination and communication lines among all actors and groupings and involving developed and developing economies. For this to happen, local and regional IGFs are key.

The so called Clearinghouse function introduced in the NETmundial talks was the objective of another workshop. There, some voices argued that there is an important gap in the distributed institutional architecture of global IG where some “orphaned issues” tend to stay unresolved due to the lack of devoted organizations where they could be tackled. Others identified this clearinghouse function as a central repository of documents and best practices (for example, the GIPO observatory to be launched by the EU. Finally, developing economies asked for a central point where practical solutions to concrete IG problems could be easily found. For them the clearinghouse function is more of a practical and concrete substance and less of just a place where discussing policy. No concrete solution was envisaged on where to place this clearinghouse function, although the IGF was mentioned as a suitable possibility even if for some governments, it lacks credibility. Another possibility for this function is to act just as coordination platform of platforms, following the distributed nature of the Internet.

Policies Enabling Access, Growth and Development on the Internet: several workshops debated the different available initiatives, measures, policies and technologies to connect the next five billion citizens. Wireless and fiber access must complement each other to solve the access problem. But this is not only a problem of technologies, is a problem of changing policies to allow a faster deployment of infrastructures: infrastructure sharing, spectrum policies, interconnection policies, clear rules for rights of way, etc. A new ecosystem is needed to stimulate broadband demand. A call for the inclusion of ICTs and Internet access in the post-2015 development agenda of the UN was made.

On the debate regarding ICANN globalization process, the need to increase ICANN accountability to the community in parallel with its internationalization was underlined. ICANN must be accountable, but not only its Board, but also all its constituencies. Other voices emphasized that more important than opening new offices outside the US is for ICANN to help creating DNS local industries in the developing world. The new gTLDs programme has showed that a real globalization can’t be done without extending this industry to other regions.

All the IANA transition process and its implications on the ICANN accountability were also explained and discussed in this edition of the IGF. There is a common idea that the IANA transition must go hand by hand with a greater accountability of ICANN in front of its community (those not yet connected to the Internet included) in order to establish a credible and legitimate framework. The objective of all this process shouldn’t be just to comply with a certain deadline, but to ensure a correct technical transition as well as the stability and security of IANA in a transparent an inclusive way.

We attended interesting discussions on how ICTs impacts the labor market. A more complete description can be found in a previously published post. We participated in the information session on WSIS+10 High Level event where some general information about its results and future developments were shared with the audience. An announcement was made of the WSIS Forum 2015, which will be held in June 2015. Discussions on enhanced cooperation and the mechanisms to allow a more complete participation by governments in Internet Governance related fora concluded that a central point for these issues is not really needed as Internet is not a centralized network.

In parallel to the IGF, civil society organizations together with local activists celebrated the so called Internet UnGovernance Forum (IUF), an initiative with the objective of protesting against Turkish government measures to control the right to speech in Internet.

This IGF edition has been successful in terms of quality of the debates and in number of participants. We left Istanbul with the feeling that future editions will incorporate changes, specially coming from the lessons learned after NETmundial. We hope these changes will reinforce the unique multistakeholder character of this forum as a platform for open exchange of ideas and creation of knowledge

For further information, the IGF Chairman’s report and summary can be found here: