· The company's headquarters, Distrito Telefónica, will convert its 140,000 square metres into a network of intelligent buildings connected to each other to optimise the exchange of information and technology and will have the capacity to train 100,000 people every year in new digital skills.
· Telefónica will strengthen the Hub with a planned investment of 100 million euros until 2024, the year in which the company will celebrate its first century.
· “The future is present and is played out in the field of innovation and talent because that is where people's lives are transformed. And Telefónica wants to redouble its commitment to the future and to people with the global Innovation and Talent Hub," said Telefónica Chairman José María Álvarez-Pallete.
· This initiative was presented on the opening day of the fourth edition of the enlightED educational innovation forum, which was attended by His Majesty King Felipe VI. 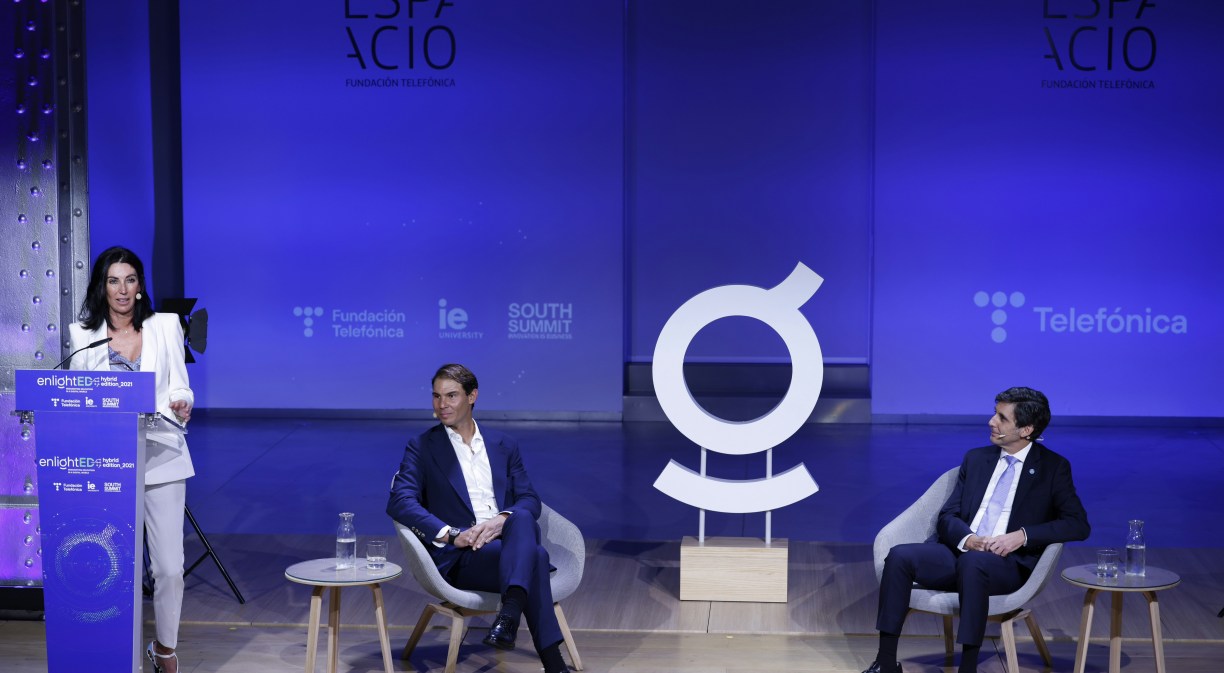 Madrid, 19 October 2021. Telefónica’s Chairman, José María Álvarez-Pallete, announced on Tuesday the creation of a large global Innovation and Talent Hub at the company’s headquarters, located in Madrid’s Distrito Telefónica. This initiative will consolidate Telefónica as the undisputed leader in digitalization, as it will allow it to project its reach beyond technology to occupy the talent space.

“Our commitment is to turn our own headquarters into a great nerve centre where knowledge from all countries will be connected and which will consolidate Spain’s leadership in the design and creation of the new digital world”, said Álvarez-Pallete. In its launch phase, the Hub will host around fifty top-level technological developments with experiences based on holography, gaming, robots, connected cars, drones, latest-generation security and the latest advances in the development of hybrid classrooms.

The global Innovation and Talent Hub will have a planned investment of 100 million euros until 2024, a special year for the Telefónica Group as it will then celebrate its first centenary.

With the features and potential provided by the 140,000 square metres of the buildings located at the headquarters, Telefónica will have a pioneering centre with which to provide a global response to the needs of the digital society, covering all disciplines and areas for the strategic positioning of the company. Thanks to the versatility and size of its facilities, Telefónica will generate, in a single space, the right ecosystem to offer the best opportunities to the 100,000 people that the Hub will be able to train each year in new digital skills. “It will be the leading Hub of the leading company”, stressed Telefónica’s chairman

Álvarez-Pallete made this announcement on the opening day of the fourth edition of enlightED, the international forum on educational innovation promoted by Fundación Telefónica, IE University and South Summit, during a dialogue with the Mallorcan tennis player Rafael Nadal, in the presence of His Majesty King Felipe VI.

The new Hub will act as a pole of attraction and retention of talent and will be pioneering in its concept and size, attributes that will enable Telefónica to consolidate its position as a benchmark in innovation. The new digital world requires continuous training with new skills and tools, so upskilling and reskilling are also priority objectives for Telefónica and its Hub. In turn, it will place Spain at the global forefront in attracting and developing technology and highly qualified professionals.

The headquarters buildings will become a large interconnected centre of excellence dedicated mainly to 5G, Artificial Intelligence, Smart Fibre, Edge Computing, Deep Learning Algorithms, Internet of Things, Cloud, Cybersecurity, Blockchain and Video. Equipped with these technologies, it will be a centre geared “not only to see the future, but to build it”, said Álvarez-Pallete.

The Hub will include disruptive projects such as the Experience Tank, a centre for sharing the latest technology, or the Wayra Lab, a platform for accessing platforms for startups to develop in areas such as healthcare, retail, industry and media. Escuela 42 and Universitas will be the pillars of the firm commitment to Talent, and People Lab and Future of Work will represent the vectors for the development of Training.

The launch of this centre extends the relentless execution of the strategic plan Telefónica announced in November 2019, with which it is accelerating its transformation to advance on the path towards the New Telefónica. With this initiative, Distrito Telefónica, in addition to being the Group’s headquarters, will act as a network of smart buildings connected to each other by applied 5G technology and holographic communications.

“The future is present and is played in the field of innovation and talent, because that is where people’s lives are transformed. And Telefónica wants to redouble its commitment to the future and to people with the global Innovation and Talent Hub,” said Álvarez-Pallete. “Both are key vectors for the progress and well-being of Spain, fundamental for reducing inequalities, creating jobs and placing our country at the forefront of a better, more sustainable, fairer and more inclusive world, where collaboration is the best competitive advantage”, he concluded.

Telefónica is one of the world’s leading telecommunications service providers. The company offers fixed and mobile connectivity, as well as a wide range of digital services for individuals and businesses. It is present in Europe and Latin America, where it has more than 367 million customers. Telefónica is a fully private company whose shares are listed on the Spanish stock exchanges and on the New York and Lima stock exchanges.