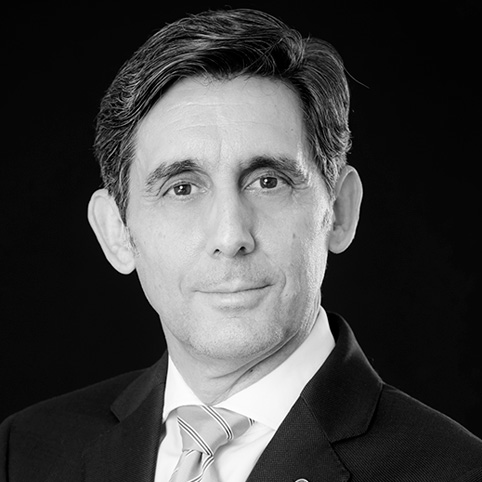 He is Chairman & CEO of Telefónica S.A since April 2016 and he joined the board of directors in July 2006. In February 2022 he assumed the Presidency of Fundación Telefónica. Also, since March 2019 he is member of the Advisory Council of SEAT, S.A. and, since February 2022, Chairman of the Board of the GSMA and member of Board of Trustees of ”la Caixa” Banking Foundation.

He began his professional career at Arthur Young Auditors in 1987, before joining Benito & Monjardín/Kidder, Peabody & Co. in 1988. In 1995 he joined the Compañía Valenciana de Cementos Portland (CEMEX) as head of the Investor Relations and Analysis Department. In 1996, he was promoted to Chief Financial Officer in Spain, and in 1998 to Chief Administration and Finance Officer of the CEMEX Group Indonesia and to a member of the Board of CEMEX Asia Ltd.

In 2001 he was granted the best “CFO Europe Best Practices” award in the Mergers & Acquisitions 2000 by the CFO Europe Magazine. In 2003, he was appointed “Member of Merit” at the Ibero-American Forum of the Fundación Carlos III and in 2007 he was awarded with the “Gold Master” of the Executive Management Forum. In 2011 he received the “Personality of the Year in Economics Award”, given by the Spanish newspaper El Economista. In 2013 he received the “Excellence 2013 Award” for his contribution to the development of telecommunications, granted by the Spanish Telecommunication Engineers Association. In 2014, he received the “Medalla Sorolla” by The Hispanic Society of America, he was named “Innovative Corporate Leader of the Year” by Latin Trade Magazine and the magazine FastCompany included him in its “100 Most Creative People in Business 2014”.

In 2016, Mr. Álvarez-Pallete was named “Best CEO” in Spain by Forbes Magazine and the Consejo Superior de Deportes granted him the entry in the “Royal Order of Merit Sports” in the category of Bronze Medal. In 2019 he was granted with the “Cross of Military Merit with white distinction”, he received the “Manager of the Year” award in the Large Corporations category granted by the Asociación Española de Directivos, and was chosen “Business Leader of the Year” by the Spain-US Chamber of Commerce. In 2020 he was awarded with the ECOFIN prize for “Financiero del Año” and the Spanish Marketing Association named him “Lider Empresarial Impulso del Marketing”. In 2021, he was named “Honorary Ambassador of Spain Brand” by the Leading Brands of Spain Forum and Actualidad Económica has recognized him as “Best Businessman of the Year”.