Telefónica General Shareholders’ Meeting approves the distribution of a cash dividend of 0.40 euro per share for 2017 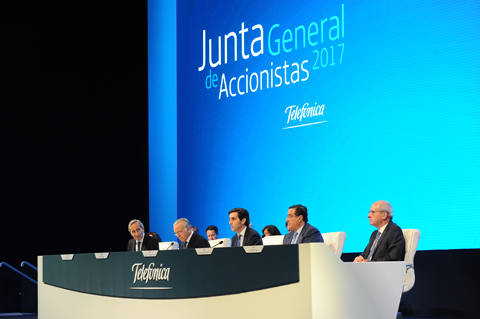 Madrid, 9th June 2017.-The Telefónica General Shareholders’ Meeting, held today in Madrid, has approved all the resolutions proposed by the company’s Board of Directors, including the distribution of a cash dividend of € 0.40 per share in 2017, with a charge to unrestricted reserves. The first payment of €0.20 per share will be made on June 16, and the second payment of €0.20 per share, will be made on December 14, 2017. José María Álvarez-Pallete, executive chairman of Telefónica, has reiterated the commitment of the company with an attractive remuneration for the shareholder and with the generation of a dividend yield consistent with the market and a sustainable pay-out.

Telefónica’s AGM has also approved the results and the management of the Board of Directors during 2016. José María Álvarez-Pallete reflected on the year in his speech, highlighting the challenges and great achievements made, expressing his satisfaction at the commitments fulfilled and announcing his confidence in 2017. “Time has proven us right. Today we can say that it is a pleasure to depend on ourselves to achieve the goals that we have set. We have reinvented ourselves and we grow in all fields. That proves that we are going in the right direction”, explained the president of Telefónica. In this context, he has emphasized the recognition of the market and the share appreciation by 14% since the beginning of the year, more than double the European telco reference index.

Álvarez-Pallete explained the reasons behind the decision undertake one of the biggest and deepest transformations of the industry and its subsequent evolution towards a platform company, “turning the data into the enabler of a new Telefónica and repositioning us in a space of innovation where many were not expecting us”. The chairman of Telefónica has detailed the investment of nearly 50,000 million euros made since 2012 in the different platforms. He’s also explained how this effort has placed Telefónica in a leading position on issues as relevant as the deployment of ultra-band networks (up to 40 million of real estate units and LTE coverage of more than 60% of the population) or in the pioneering initiative of providing Artificial Intelligence and Cognitive Systems to the company’s networks and services. This will allow the customer to manage their digital experiences with Telefónica in real time.

In this sense, José María Álvarez-Pallete has illustrated this business transformation by saying that Telefónica has gone from selling minutes to selling gigabytes, and that broadband revenues and connectivity services have surpassed access and voice for the first time. In his speech to the shareholders, he highlighted the growth of the main financial figures, a good performance that has translated into net profit and generated a free cash flow that grows for the first time in five years, up to 24%. Together with a record investment of up to 16.5% of revenues.

Precisely in relation to the goals set for 2017, Telefónica’s chairman has reiterated to the company’s shareholders that it will be a year of sustainable growth thanks to a solid and already consolidated base and with very clear priorities: to grow cash generation, with expansion of margins and maintaining high levels of investment. He also recalled the success of the partial sale of Telxius last February, as well as the objective of maintaining a solid investment grade rating, reinforcing the company’s balance sheet through the aforementioned cash generation and a progressive organic deleveraging.

The other proposed resolutions have also been approved by shareholders, including the delegation to the Board of Directors of the power to issue debentures, bonds or notes among others, and to formalize, interpret, remedy and carry out the resolutions adopted by the shareholders at the AGM held today. They also approved the consultive vote on the 2016 Annual Report on Directors’ Remuneration.

Lastly, José María Álvarez-Pallete explained in his speech that the goals reached by Telefónica have been achieved from a sustainable business model base, generating impact in all markets in which the company operates. In this sense, 2017 Shareholders’ Meeting is been certified as a Sustainable AGM by Aenor in accordance with ISO 20121: 2012.

The president of Telefonica has said that “for us, it is as important to achieve our goals as how to achieve them” and stressed that “we want to contribute to create a better, more equitable world, actively participating in the construction of the new Digital Society”. He has also highlighted the importance of working in reducing the digital gap, with digital education being a very effective way to achieve it. Therefore, Fundación Telefónica, Telefónica Digital Education and Fundación Profuturo are also promoting programs to improve the skills and competencies of children and young people.

From a regulatory perspective, Álvarez-Pallete has also focused on the ethical debates that technology poses and has criticized the need to achieve “digital trust” and guarantee a safe and reliable Internet experience, a fundamental requirement for development of the digital economy. “At Telefónica we have clear principles of privacy regarding the use of data: security, transparency and control. Our priority is to cultivate the trust of our customers every day, “said Telefónica’s executive chairman.