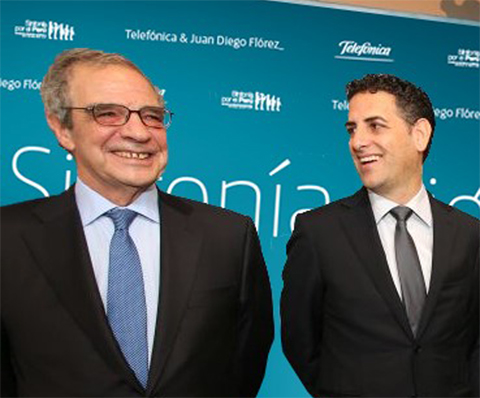 Lima, March 16, 2016- César Alierta, Executive Chairman of Telefónica, and Peruvian tenor Juan Diego Flórez, today presented “Sinfonía Digital”, a global project launching initially in Latin America which combines music and technology as education and social inclusion levers aimed especially at children and youths with limited resources that live in vulnerable areas. As part of this collaboration project, the renowned tenor also becomes an ambassador of the Telefónica brand around the world.

Through Telefónica’s vast experience in the region and “Sinfonía por el Perú”, the youth and children’s orchestra network created by Juan Diego Flórez to promote social integration and values training through music,“Sinfonía Digital” will mainly focus on three lines of work in the next three years.

Several initiatives have already been identified as part of this project which will introduce new activities over time. Initiatives such as the development of online music content and its inclusion in Telefónica´s educational platforms; initiatives around innovation linked to Telefónica’s technological projects; and activities specifically aimed at promoting social interest for classical music and music creation.

The first milestone of this partnership will be the creation of a “Núcleo Modelo Telefónica”, a musical centre that will host around 400 kids and will become the first digitalized musical centre in Peru where digital technology will be implemented with the aim of later replicating it in other musical centres in the country.

“Sinfonía Digital” is the result of the common interest shared by Telefónica and Juan Diego Flórez for providing educational opportunities to children and youths with limited resources. In this way, Telefónica, through its Foundation, has been promoting different educational and social inclusion initiatives that this year alone will benefit 1.5 million children and youths in Latin America, 250,000 of them in Peru.  Juan Diego Flórez’s huge interest in social inclusion led him to create in 2011 “Sinfonía por el Perú”, a network of musical training centres comprising orchestras and choirs aimed at children with limited resources. Not only have the 4,000 youths who have already passed through the 13 centres that make up the network received a musical education, they have also been able to improve their overall academic results in general. Encouraged by the success of the program in his home country, Juan Diego Flórez now wants to extend and broaden the character of the initiative to other countries together with Telefónica.

For the last two days, Juan Diego Flórez and César Alierta have had the opportunity to get to know the initiatives being developed in Peru. On Monday they visited Mazanari, in the Junín region, where the Telefónica Foundation operates a pilot scheme developed for the educational institution “Aldea del Niño Beato Junípero Serra” that educates 900 children using digital tools. On Tuesday, both visited in Manchai in the surroundings of Lima, one of the music centres of “Sinfonía por el Perú”, where almost 200 children are transforming their lives through music.

As global ambassador of the Telefónica brand, Juan Diego Flórez will participate in numerous internal and external company initiatives that go beyond the social and educational character of the “Sinfonía Digital” project. In this capacity, the tenor will participate in different corporate events aimed at employees, clients, and other company partners, and will also be part of the Telefónica advertising communication strategy on a global level.