Movistar Team, the Best Team in the World, “Dreaming of the yellow jersey” this season 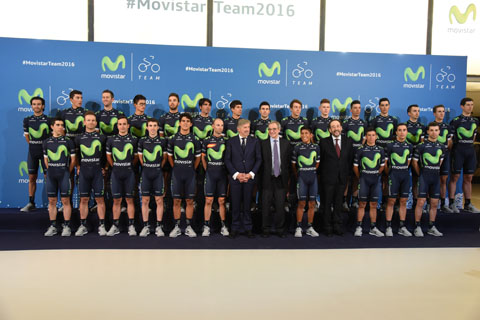 Madrid, 27 de enero de 2016.- Movistar Team, The Best Team in the World in 2015, met in the Distrito Telefónica, (Las Tablas, Madrid), to present the official team for the 2016 season and the challenges facing them this year. For the sixth year running, the headquarters of Telefónica was the meeting point for the cycling world, with sports personalities, authorities, sponsors, and fans who what to know first hand the challenges of the team that today, more than ever, “are dreaming of the Yellow Jersey” symbol of the Tour de France.

The event was attended by Carlos López Blanco, Global Head, Public and Regulatory Affairs of Telefónica and Eusebio Unzué, the Movistar Team General Manager, who presented the 27 riders in the team with the help of journalists Javier Ares and Mónica Marchante.

New recruits for 2016 are Nelson Oliveira, three-time champion of Portugal against the clock; Dani Moreno, one of the best Peloton Classic specialists member of the team since 2008-09; the Columbian Carlos Betancur, best youngest rider of the Tour in 2013; and first-class novices Jorge Arcas and Antonio Pedrero, all-in high-level mountain-pass cyclists. With these five new recruits and their successful track record, the Movistar Team are to raise their sights on the International Peloton.

This presentation served to take stock and remember the greatest moments lived by Unzué´s team since February 2011, date on which Telefónica resumed sponsorship of cycling. With almost 150 victories spanning four continents and 1,500,000 kilometres cycled during competitions over the last five tours, the Movistar Team have maintained their reputation has leaders of International Peloton held since its foundation in 1980.

The double podium of Quintana and Valverde –winner of the UCL world race classification for the fourth time– in the Tour de France; the fastest time to record of Alex Dowsett, 21 years after Miguel Indurain; the fourth position of Andrey Amador in the Tour and the collective victories in the the Grande Boucle and the Vuelta a España were some of the many triumphs of the Telefónica Set during 2015.

Unzué pointed out that “every year it is more difficult to be better than the year before, but we have a team that is more than capable to fight for the challenges we face. Nairo has demonstrated that he is ready to fight for the crown in the Tour and in all the important races; Alejandro surprises us every year with his enormous sporting and human values; and at their heels, a second, even larger, line of riders, such as Dayer Quintana, Lobato, Jesús Herrada, Rubén Fernández, Ion Izaguirre, Sutherland…are many reasons to believe in the success of this team, and with the new recruits, Danie Moreno, who has returned to the flock, Oliveira Pedrero, Arcas and Betancur, we are in a position to continue making progress and opening up our horizons.”

During the presentation, we were reminded that the 27 riders could not achieve their goals if it was not for the support they receive from a team of thirty collaborators and almost forty professionals that make up the Movistar Team. Together, they have proved that they know how to react to the challenge of Telefónica in the digital arena, positioning themselves as one of the most popular teams on the Internet with more than 700,000 fans that follow the blue team on their official web site, movistarteam.com, and their profiles on Twitter, Facebook, Instagram, YouTube, and SoundCloud. The event was followed through social networks with the #MovistarTeam2016 tag.

Carlos López Blanco, Global Head, Public and Regulatory Affairs of Telefónica, after congratulating the riders for their success, took stock of the season and classified the team´s six seasons of work put into promoting the trademark and putting cycling “on the map” of the world of prestigious sports as a “great success”. López Blanco spoke of sharing with the team “their aspiration of being the highest on the podium of one of the big races” and hopes that the Movistar Team continues to be “everyone´s team”, inspiring the younger generation in this sport, offering exciting viewing for their fans, and reaching deep into the heart of those individuals who love this great sport.”

“Being preoccupied for one´s health and healthy habits is on the increase, and cycling, as a sport and lifestyle, is a perfect way of nurturing these habits and we want to be there”, López Blanco concluded.

Teléfonica shall continue supporting professional and amateur cycling, sponsoring popular races, developing applications to give you a better experience of this sport, facilitating best-practice information…, in short, the aim is to go from having spectators to having more and more individuals practising this sport.

Lastly, Telefónica, as sponsoring company, shall continue to drive initiatives so that the Movistar team becomes an area for innovation and hopes to achieve that the internet remains a means for promoting the sport and the activities of the team.