Telefónica participates in the presentation of the LEO report 2019

The report looks into ways to achieve a sutainable and inclusive development in Latin America and the Caribbean through public affairs.

Telefónica participated in the presentation of the LEO report 2019 (Latin American Economic Outlook) created jointly by the Development Center of the OECD, the CAF (Interamerican Development Bank), ECLAC (UN Economic Commisssion for Latin America and the Caribbean) and the European Commission at Casa de América’s auditorium.

This report looks into the issues affecting sustainable and inclusive development for Latin American and the Caribbean, and this year has been named Development in Transition. This report compares the performance of Latin America with other regions, analyzing the main challenges for its development and issuing recommendations, experiences and good practices for the drafting of public policies.

This meeting was attended by prominent business leaders and gobernmental authorities. We can highlight the participation of Trinidad Jiménez, Director of Global Public Affairs Strategy, Alicia Bárcena, executive secretary of ECLAC, José Antonio García Belaunde, CAF’s representative for Europe, Mario Pezzini, Director of the Development Center of OECD,  Andrew Jacobs, Chief of Analysis unit of Latin America and the Caribbean for the European Commission and Manuel Escudero, Spanish ambassador before the OECD and president of the Development Center of the OECD. 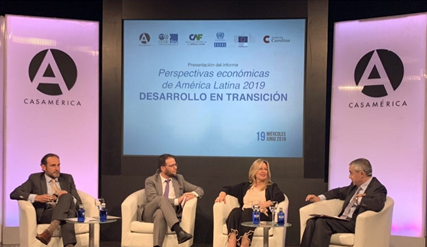 This report shows how fast the world is changing. These changes call for further international cooperation, that includes the efforts of the pulic and private sectors to achieve a greater development of the Latin American region. The overall development must be human-centric, workign towards a more inclusive society and a long-term sustainable model.

In order to achieve these objectives it is essential to increase the current connectivity levels to bridge the digital gap. In Latin América more than 45% of the population lacks access to the net. This is the reason why we need to develop new business models, such as the one developed in Perú by Telefónica, Internet para Todos, which deploys connectivity through an ecosystem-based approach, by colaborating with the interested stakeholders to deploy rural connetivity networks.

Trinidad Jiménez stressed the need for digitalization to push the economic and social development of the region, emphasizing the necesity to reinforce the collaboration between the public and private sectors in the digital environment. We need an inclusive and sustanaible approach to our current challenges and we have walked the talk by signing Telefónica’s Alliance with the Development Center of the OCDE.