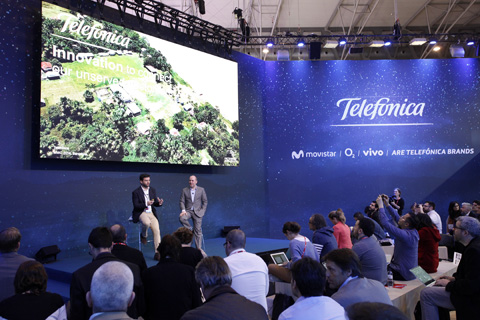 MWC, Barcelona, 26th February 2018. – Telefónica presented today “Internet para todos”, a new initiative to connect more than 100 million people in Latin America to the internet. Digitalization is an important factor of social and economic progress, and mobile broadband can play a key role in reducing the digital divide. 20% of the population in the region today still lacks proper access to mobile broadband.

With “Internet para todos”, Telefónica is expanding connectivity with an ecosystem approach, incorporating a broad range of partners and stakeholders to solve the rural connectivity challenge.

Telefónica is working, jointly with Facebook, on multiple projects using new technologies and operating models to make wireless broadband deployment more cost-effective. These projects are already making high-speed mobile internet available to tens of thousands of Peruvians across the highlands and in the Amazonian rainforest. Using an open approach to network deployment, both companies are empowering rural mobile infrastructure operators, local entrepreneurs and communities to collaborate in delivering high-quality connectivity in an efficient and sustainable manner.

Telefónica and Facebook started working together in 2016 through the Telecom Infra Project (TIP), an industry initiative to disaggregate traditional network hardware and software. By early 2017, the pair started collaborating on how to address the un(der)-connected throughout rural and suburban Peru. The companies developed high-definition population density and artificial intelligence tools to prioritize connectivity deployments in remote low-density areas and shared their learnings publicly through TIP.

Recently, the team began testing the ability to stretch the capabilities of existing technologies, such as microwave, and exploring new Radio Access Network (RAN) solutions such as Parallel Wireless programmable Open RAN technologies to connect remote communities in Peru with 3G and 4G wireless based on General Purpose Processing Platforms. The pilot demonstrates the maturity of the technologies to provide cost-effective connectivity in low-density areas. Telefonica is also testing Facebook’s OpenCellular LTE RAN platform.

Additionally, Telefónica is experimenting with other disruptive technologies such as sustainable power solutions and alternative vertical infrastructure.

“Developing new technology is just one part of the equation. We also need to explore new business models and cooperate with other service providers and regulators to make the investment required sustainable”, commented Telefónica Chief Innovation Officer, Gonzalo Martín-Villa. “These innovations are the foundation of the next generation networks and services that will benefit the whole industry and, above all, society”.

Telefónica and Facebook also shared their vision on how regulators can contribute to achieve the goal of Internet para todos. The policy paper New Approach to Rural Connectivity: The Case of Peru, presented today in a Workshop organized during the Mobile World Congress, stresses that providing sustainable rural connectivity also relies on complementary connectivity policies and highlights the positive steps taken by the Peruvian Government to foster investments in rural areas. Peru’s commitment to Rural Access Connectivity is reflected in its telecom legislation. One of the steps taken allows the creation of the Rural Mobile Infrastructure Operators (OIMR by its Spanish acronym), local companies that own mobile infrastructure but use spectrum allocated to other operators. OIMRs are allowed to use their infrastructure to extend the reach of traditional mobile carriers covering last mile access in rural areas.

Virginia Nakagawa, Vice-Minister of Telecommunications of Peru, stressed during the Workshop the relevance of partnerships to achieve full connectivity in under-developed regions: “We believe the right way to move forward is to promote the cooperation of different ecosystem players to maximize complementarities among them and to review old regulatory burdens that may not make sense in a data-oriented economy”.

Inspired by their encouraging progress in Peru, Telefónica and Facebook are now expanding their collaboration to two new countries in South America, to be announced shortly.

Blog
#Connected car
Connected car: what is it and what is its future?
Blog
#Public Policy
B20 Indonesia, the summit that channels the business voice to G20 leaders
News
#Metaverse
Tourism is joining the metaverse