Considered as a key priority in the Digital Agenda Review to foster entrepreneurship, employment and competitiveness,  The Grand Coalition for Digital Jobs is a multistakeholder...

Considered as a key priority in the Digital Agenda Review to foster entrepreneurship, employment and competitiveness, The Grand Coalition for Digital Jobs is a multistakeholder partnership launched in order to try to solve a relevant problem in Europe: the projected shortfall of around 700.000 ICT professionals in Europe by 2015 and the continuous decline of computing science graduates.

Many companies such as Telefónica, Intel or Microsoft, industry associations (Digital Europe, the European e-Skills Association…) and Member States have responded positively to the European Commission call to action in the last few months. Telefónica pledged its commitment very early, taking part to the launch of the Coalition in Davos with Commissioner Kroes last January.

Being one of the first companies who joined this Grand Coalition, Telefónica yesterday increased its commitment to partner with the EU and help close the digital skills deficit in Europe, reinforcing the company’s long-standing campaign to drive social change and economic recovery in the region. 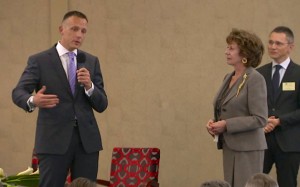 Telefónica pledged yesterday during the EU Grand Coalition for Digital Jobs Conference to open up the largest global technology festival – Campus Party Europe, which is being staged at The O2 in London later this year – to any corporation or NGO wanting to promote digital training and recruitment.

Eva Castillo, CEO of Telefónica Europe, said: “A thriving Telefónica needs a thriving Europe, which is why we are taking serious steps to address issues that are impacting both our society and economy. Telefónica’s pledges to the EU will help provide digital skills training for European children, create a pan-European start-up internship program and also stage a major Career Fair at Campus Party Europe. By helping close the digital skills gap, we continue to champion the spirit of entrepreneurialism that will contribute to positive change in Europe”.

Here is a quick overview of what Telefónica is already working on and what it will boost during this year:

– Talentum Startups internships program is aimed to improve engineers and ICT professional careers within an entrepreneur and innovation environment. There are two versions of internship:

– Telefónica will have up to 400 interns projects in Spain by end-2013 and will scale to Europe: Germany, Ireland, UK, Czech Republic, Slovakia and Sweden. Telefónica is aiming to have by 2015: 1,000 Startups in Europe and collaboration with 30 European Startups accelerators

– Telefónica Digital Making – Telefónica is seeking to welcome young people, aged 5 to 25 across 6 EU countries, into a world of ideas and technology, giving them the opportunity to practice the principles of entrepreneurship by creating and expressing themselves on digital platforms. Through a diverse educational program including events within Telefónica offices, workshops in Telefónica stores and on-line training young people are trained in a range of digital skills. These skills will include apps coding, HTML/CSS and Robotic programming. By December 2013, Telefónica will have around 10,000 young people participating across Europe.

– Careers Market Place at Campus Party Europe 2013 , the largest global technology festival with 10,000 young people which will take place at The O2 from 2-6 September 2013 under the patronage of the European Union. Telefónica is committing to create a Careers Fair where at this event where partners will be able to present and promote recruitment and training opportunities to the Campuseros but also to the wider public during the entire week. Campus Party Europe will signal the start of a broad movement to tackle the skills gap in Europe as well as encourage and promote the development of a digital ecosystem.