Álvarez-Pallete: “We must take digitization to the next level with Artificial Intelligence”

Telefónica’s chairman, José María Álvarez-Pallete, used his speech on Monday during the first day of the Mobile World Congress, at the opening of a session organised by the GSMA and entitled 'Our Connected World', to highlight the potential and the opportunity that digital transformation represents. 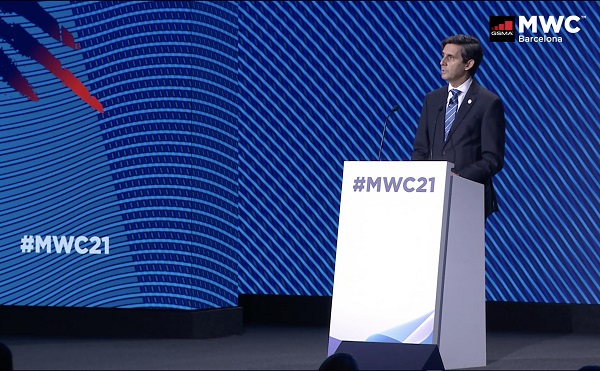 Barcelona, 28 June 2021. Telefónica’s chairman, José María Álvarez-Pallete, used his speech on Monday during the first day of the Mobile World Congress, at the opening of a session organised by the GSMA and entitled ‘Our Connected World’, to highlight the potential and the opportunity that digital transformation represents. “This digital revolution is the once in a lifetime opportunity to reimagine the future. With great opportunities, comes great responsibility. Let us honor it,” he emphasized.

Precisely in order to reinforce the historic moment that now presents itself both for the telecommunications sector and for society as a whole, Álvarez-Pallete based his speech on three concepts: Relevance and Revolution through Reclamation.

Recalling all that has happened in the last year, which “has been like travelling in a time machine five years ahead in terms of adoption of technology”, he highlighted the fact that telecommunications networks passed the test to which they were subjected. “When we were most needed, we were there,” he said, reflecting the Relevance acquired by telecommunications companies. And, above all, he underlined the new world that is opening up for these networks, which “are no longer just carrying data but enabling the world of the Artificial Intelligence”. ” As much as a 40% of Internet traffic is non-human, generated by machines that are talking to each other”, he pointed out as a demonstration of this new era in which digitization “is going to yield enormous amount of data that can be transformed into information by the Artificial Intelligence”.

The challenge is to turn that data into knowledge, which requires “taking digitization to the next level, making it smart, letting Artificial Intelligence realise its full potential”. He added: “This can only happen with the support of the next generation digital infrastructure and a solid telco sector whose Relevance to the economy and society is now more significant than ever”.

In further detailing his approach, Álvarez-Pallete has placed cutting-edge connectivity as “the first ingredient” of the new smart digitization. Next to it, as the second ingredient, “technologies like Edge Computing, Cloud, Cybersecurity, IoT and Big Data”. And, as the last ingredient, the forecast of a substantial increase in data generated by digitization and transformed into information by Artificial Intelligence. “The real evolution lies there,” said Álvarez-Pallete.

Seizing it requires decisive action. “This is an extraordinary opportunity we cannot miss, but it is also a bog challenge. Governments need to attract investment in the smart digital infrastructure that will make all that possible,” he said. And this response must come now, because there is no time to lose: “We need to react to keep up with the opportunity. To grab it, Europe needs a sustainable telco sector, otherwise we will lag further behind in the global race for digital leadership”.

“We reclaim a new regulatory framework and competition rules to build a strong digital Europe”, he demanded. This call proposes a necessary change to take full advantage of digitization as a transformative lever capable of generating growth, quality jobs, sustainability and inclusion.

People at the core

These changes are what the current Digital Revolution can bring about, which, if well managed, will transcend its dimension and become an Intelligent Revolution. “We need a new Digital Deal to manage the digital transition with values and people at the core” said Álvarez-Pallete.

Driven by its mission to ‘make our world more human by connecting lives’, Telefónica promotes fair, inclusive and sustainable digitization, so that digital can also act as a unifying and cohesive backbone if it is conducted with a clear vision. “It is our collective responsibility to future generations to spread the benefits of digitization and make sure that we do not leave anyone behind. Inequality of opportunities is the major challenge we are facing,” he warned.

This need to combine the potential of digitization and connectivity with values and people is evident in the processing and management of data, which in this revolution has become a new production factor that is absolutely key because of the sensitive information it contains. “Our privacy and our individual data are part of our dignity. We have the right to know who is using it and how, how much it is worth and who benefits from their value”, said Telefónica’s chairman.

Álvarez-Pallete’s speech took place during the first of four days of this year’s Mobile Congress. Telefónica is attending the Congress in person, with a 952 square metre stand, and with an extensive virtual proposal, reflected in a twin or digital stand through which all the latest news on the company’s participation in the MWC can be followed. In total, the Group will showcase up to 34 customer success stories that will showcase the solutions, services and applications with which Telefónica supports companies, sectors and public administrations in their digital and technological transformation.

For more information on the Digital Twin: mwc/telefonica.com

For more information on Telefónica’s participation in the MWC: telefonica.com/mwc