Telefónica Empresas is installing 500 new defibrillators at Spanish airports managed by Aena. These will be monitored with mobile technology and they will transfer any calls to the airport’s emergency services. 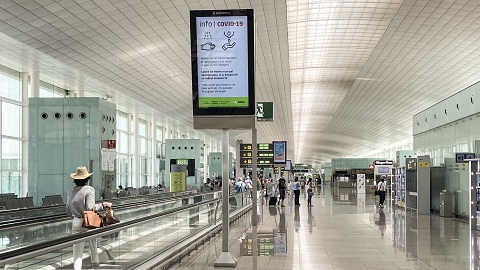 Madrid, 15th September 2020.- Telefónica Empresas is installing 500 new defibrillators at Spanish airports managed by Aena. These will be monitored with mobile technology and they will transfer any calls to the airport’s emergency services.

The company will thus convey the benefits of the Internet of Things (IoT) and sensorisation to all areas of life, including prevention and health, signing up to the challenge of reducing the number of deaths from cardiac arrest by means of a comprehensive service based on public access to defibrillation.

This initiative forms part of a larger project undertaken by the public administrations in Spain to combat sudden cardiac death, a disorder causing 30,000 deaths in the country every year that can only be reversed if a defibrillator is close at hand.

An assessment of the victim’s condition is made through the defibrillator and, only if there is a cardiac arrest, the necessary electric shock is applied to reverse the condition. Telefónica is also responsible for the integral maintenance of the devices to ensure that they are constantly available.

The agreement between the two companies envisages the renewal of the devices and an increase in the existing numbers, as well as the installation of semi-automatic defibrillators at some general aviation airports that don’t have devices and the training of non-healthcare personnel to use them if necessary. The monitoring and management of the defibrillator network will be carried out by the DOC (Digital Operations Centre) located in Julián Camarillo Street in Madrid.

Sudden cardiac death is the abrupt loss of pulse and consciousness caused by an unexpected failure of the heart’s ability to effectively pump blood around the body. Most of these bouts of cardiac arrest are due to a disruption of the electrical conduction of the heart caused by a disorder called ventricular fibrillation, leading to chaotic activity within it. It can only be reversed if an electric shock is applied within 3-9 minutes of the onset of the symptoms. The chances of survival drop by between 7% and 10% after every minute that goes by. The difficulty in accessing a defibrillator in such a short time explains why only 5% of victims of cardiac arrest survive.