Telefónica Tech is integrating more than 30 people with disabilities to join its workforce in the coming months. The workers must pass a minimum of seven weeks' training, after which they will be employed for nine months with support, where they have to successfully perform cybersecurity skills in order to be hired. Ninety per cent of the people in the programme have no cyber security skills prior to training and upon completion are able to work in a Security Operations Centre (SOC) as a member of the team. 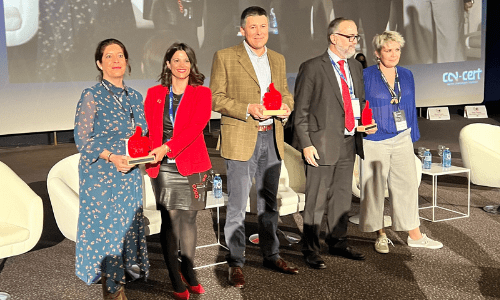 Telefónica Tech, Telefónica’s digital business unit, and the Goodjob Foundation, a non-profit organisation whose main objective is to work for the integration and employability of people with disabilities, have been working together for years to promote the employability of people with disabilities in the field of cybersecurity. As a result of this relationship, Telefónica Tech already employs seven workers from the #include Programme and plans to incorporate twenty-four more in the coming weeks. They are also analysing the possibility of extending the collaboration to other areas of Telefónica Tech.

This job placement programme is aimed at people with a disability certificate equal to or greater than 33%. The programme consists of three phases: starting with the student selection process, they have to pass a seven-week training; then, they work for nine months in the security operations area (SOC) of Telefónica Tech through the support unit of the Goodjob Foundation; and finally, based on their performance, they join the workforce with the same benefits and responsibilities as the rest of the workers.

Telefónica Tech shares the Goodjob Foundation’s commitment to achieve the integration of people with disabilities in the labour market, breaking the barriers of access to such technological sectors as cybersecurity, a sector where more and more qualified professionals are in demand and where the members of the programme are proving to be as capable as the rest of their colleagues.

On 1 December, the Goodjob Foundation wanted to recognise this collaborative relationship with the #include 2021 Award in the #includeR Company category, highlighting Telefónica Tech’s commitment to the real integration of all people with disabilities in society, and where the labour market is a key element in achieving this.

For Maria Jesús Almazor, CEO of Cybersecurity and Cloud at Telefónica Tech, “this recognition encourages us to continue collaborating with the Goodjob Foundation in the training and employability plan so that people with disabilities can join the labour market with equal opportunities. The programme offers results that support it, as more than 90% had no knowledge of cybersecurity before starting and after their passage through the project they are qualified professionals capable of working in Telefónica Tech’s Digital Operation Centre, as well as in other cybersecurity positions”.

According to César López, General Manager of the Goodjob Foundation, “the determination of the professionals involved by Telefónica Tech in making the participants of the #include Programme operational in their jobs is key to the success of the integration process”.