Telefónica presents AURA, a pioneering way in the industry to interact with customers based on cognitive intelligence

Telefónica shows its transformative 4th Platform project for the first time at the MWC   The application of cognitive capabilities to its platforms will allow... 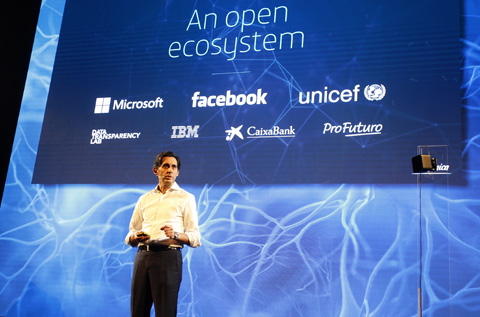 Mobile World Congress (MWC), Barcelona, February 26, 2017.- Telefónica presented today its fourth platform that, thanks to the application of cognitive capabilities, will be the basis for a new relationship model with customers. AURA will enable users to manage their digital experiences with the company and control the data generated by using Telefónica’s products and services in a transparent and secure manner. Telefónica becomes the first company in the industry to provide its customers the possibility of managing their relationship with the company based on cognitive intelligence.

The process of transformation began several years ago with the complex task of simplification and end-to-end digitalization of the company in order to make the three platforms it already had intelligent.  Since 2012, Telefónica has invested approximately 48 billion Euro in this process both in the deployment of networks and other state of the art infrastructure, and in the integration of all its IT systems or the development of new digital products and services.

These platforms are building blocks that enabled Telefónica to develop a fourth, cognitive platform.  AURA redefines the interaction between Telefónica and its customers in a safe and simple environment, with transparency and control over personal information. AURA will facilitate the discovery of new value-added propositions based on the insights of their data and will be available through multiple channels and devices.

The fourth platform will make cognitive sense of this flow of data. Until now, this data was generated in an uninterrupted, although fragmented, manner by the networks and other physical assets of the company (1st platform, Telefónica’s core asset), its unified IT systems (2nd platform), as well as the products and services it offers to its users (3rd platform). These smart platforms will imply a major qualitative leap in the customers’ experience with the company.

“Cognitive intelligence will allow us to understand our customers better, so they can then relate to us in a more natural and easy way, and generate a new relationship of trust with them based on transparency and the control of their data”, said Telefónica Chairman and CEO, José María Álvarez-Pallete during the presentation event. “We are pioneers in this relationship model. Never before have the users of telecommunications services been able to talk with the networks in real time. We’re expanding the relationship with our customers, seeking to increase their satisfaction, and opening new possibilities for them so that they can enrich their digital lives with us”.

Chema Alonso, Chief Data Officer of Telefónica, resorted to the latest technologies for the presentation of AURA. Using HoloLens, Microsoft’s augmented reality glasses, he described the path that data follows through the first three platforms, up to its transformation into something unique for each customer. As proof that AURA is not just a project but a nascent reality, Telefónica made several demonstrations through different channels, such as a mobile app and the integration of AURA with Amazon Echo.

For example, customers will be able to ask questions about the products and services they use; create and track a claim; manage and unblock device access to the Wi-Fi router provided by Telefónica; get information about their favourite shows and program their recording; or be alerted when their data consumption is greater than usual. Each user will have a “personal data space”, the memory which will store the digital trace they leave when using Telefónica products and services, and which will allow the customers, if they so desire, to personalize their experience. AURA will also be able to make recommendations about offers of products and services that best adapt to the needs of the user, the contents that adapt to their preferences, the installation of security, or the detection of fraudulent apps.

“With AURA we want to transform data into knowledge and place it into our customers’ hands so that they are able to know, decide, and act, and so that they can make the most of their relationship with Telefónica”, said Chema Alonso during the presentation.

Based on the principle of the customers’ privacy in their relationship with Telefónica, users will be provided with safety, transparency, and control over their data.  AURA will be easy to manage. An example of this simplicity is the Timeline feature, which will enable users to chronologically see the data they generate as they use the company’s products and services.

In this space of trust and understanding with the customer, AURA will allow users to decide whether or not to share part of the insights generated from their data with third parties and so enrich their digital experiences. Integration with other technologies and digital services will make AURA a powerful platform of innovation open to other partners and different technologies.

“Artificial Intelligence is poised to be the transformative technology of our time, and at Microsoft we aim to bring the benefits of AI to every person and organization on the planet,” said Peggy Johnson, Executive Vice President of Business Development at Microsoft during the presentation. Telefónica is collaborating with Microsoft in its fourth platform project. “We have made deep investments in AI, machine learning, and an industry-leading cloud infrastructure to set a new bar for intelligent services like speech and image recognition. We’re thrilled to collaborate with Telefónica to bring these next generation experiences to their customers.”

UNICEF also participated in the presentation with another example that demonstrates the great social potential contained in data. Users will have the possibility of altruistically sharing anonymized data regarding their mobility or use of mobile services. In this way, the United Nations agency will be able to improve the quality of its predictive models, improving its response to children in cases of natural disasters or health emergencies.

“As UNICEF continues to innovate in an increasingly complex world, we need to agree with new partners and use new technologies to solve the biggest challenges facing children.  In crises like natural disasters, diseases, and the ongoing movement of millions of children because of war and violence, UNICEF knows that partners and technologies are key to our ability to understand the world and act quickly.  We are excited to work with Telefonica, and our other major technology partners, to build solutions to the most pressing issues of our time”, added Christopher Fabian, Co-Founder of UNICEF Innovation.

Along the same line, another use case is being developed in collaboration with ProFuturo, the social and educational initiative promoted by Fundación Telefónica and Fundación Bancaria “la Caixa”, so that customers can anonymously and voluntarily give their data and ProFuturo can combine it with its own and obtain useful insights for the implementation of its social initiatives. In this way, customers of Telefónica can help governments and humanitarian agencies to achieve the educational challenges identified by the United Nations’ Sustainable Development Goals Fund.

Javier Oliván, Vice-president of Growth at Facebook, presented an interesting example of the potential of new collaboration proposals. This use case demonstrates an improvement of Facebook’s Safety Check service for Telefónica customers that have also registered with the service, enhancing accuracy of notifications. In case of an emergency, when Safety Check is activated, Facebook will have the capability of notifying Telefónica customers who are in the area, prompting them with a notification so they can verify if they are alright. In this collaboration, the client’s personal information is not shared with Facebook. “We are excited to partner with Telefónica to improve experiences like Safety Check, so members of our community can let friends and family know they’re safe if they happen to be near a disaster area”, said Mark Zuckerberg, Founder, Chairman and CEO from Facebook’s headquarters in Menlo Park.

The use cases of AURA shown during the presentation, as well as the great possibilities opened up with this new model of relationship with its clients, can be seen at the Telefónica stand at the Barcelona MWC (Hall 3 – 3K 21), where the company proposes a unique journey through its four platforms.

The company has a significant presence in 21 countries and 350 million accesses around the world. Telefónica has a strong presence in Spain, Europe and Latin America, where the company focuses an important part of its growth strategy.

Telefónica is a 100% listed company, with more than 1.5 million direct shareholders. Its share capital currently comprises 5,037,804,990 ordinary shares traded on the Spanish Stock Market and on those in London, New York, Lima, and Buenos Aires.

Press room
#Movistar
Movistar consolidates its television platform as a leader in Europe
Blog
#Public Policy
Do you know how Aura can help to protect your privacy and manage your personal data?
Blog
#Public Policy
Aura and the construction process of personalities for Artificial Intelligence