In the context of de-escalation from Covid-19 restrictions, in the coming months, the Spanish beaches will open this summer with capacity control for which Telefónica has the best solution integrating technology and connectivity that will allow the city councils to carry out this control. 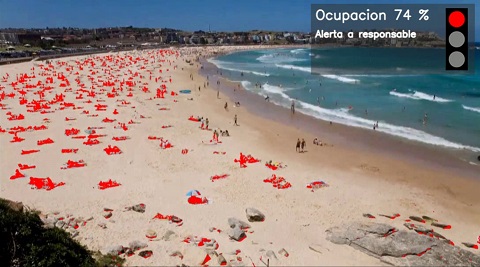 Madrid, June 8th 2020. – In the context of de-escalation from Covid-19 restrictions, in the coming months, the Spanish beaches will open this summer with capacity control for which Telefónica has the best solution integrating technology and connectivity that will allow the city councils to carry out this control.

Through a video surveillance system using IP cameras with 4G connectivity and equipped with powerful software, these cameras detect which areas are being occupied and which are free and calculate the percentage of occupation in real time. In addition, it allows to have exclusive cameras to count people at the accesses to the beach improving the reliability of the system and combining data of percentage of occupation of the space with data of capacity of people in that space.

The protocol for the opening of beaches recommends the authorities (town halls, coasts, autonomous communities) to determine the capacity of bathers and set the maximum number of people who may come in groups to the facilities.

With this solution from Telefónica, local councils will be able to control, simply and effectively, the capacity of their beaches using cameras that capture images of the area. The installed software does not record images and does not store any personal data. It will only detect which areas of the space are occupied and which are free.

From the user control panel, a map shows all the points of the beach area and allows you to visualize, both that area, its percentage of occupation, its current capacity and the maximum allowed for that location. In addition, alerts can be configured on the mobile phone of those responsible for monitoring the capacity.

This capacity and occupancy control system has more than 99% reliability thanks to the cameras equipped with powerful software with intelligence and artificial vision through a neural network and is capable of discriminating against other elements and discarding them from the counting metrics as it only counts people.

With these actions, Telefónica Spain reinforces its commitment to be one of the benchmark players in the new technology market for companies and public administrations in their digital transformation process, both from an internal and organizational point of view and in the services they offer to their customers.