800,000 homes, up to a total of six million, can initially enjoy proposals from Air Europa, Iberia, Atlético de Madrid, and La Liga, with other new companies from the health, banking, or e-commerce sectors being added soon. 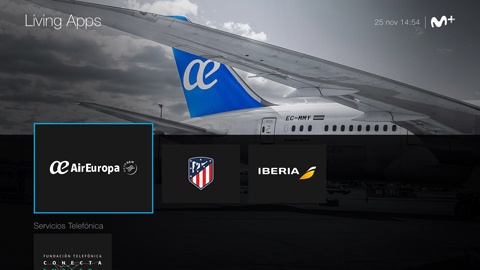 Madrid, 13 November 2019.- Telefónica announced the availability of Movistar Living Apps, proprietary apps and from third-party companies that offer new digital experiences to Movistar customers in 800,000 homes. This is the number of homes that initially have the technology necessary (Movistar’s UHD TV set-top-box) to be able to access these applications through Movistar+ and fully enjoy these new proposals, a number that will be progressively expanded up to six million with fixed broadband as additional technological changes are implemented.

Telefónica is the technological leader in homes offering the best connectivity thanks to its extensive fibre optic network, and where customers have multiple Movistar devices (HGU router, HD television set-top-box, or Movistar Home, the smart device for homes) in order to enjoy traditional communications services, Movistar+, as well as new security (Smart WiFi) and cloud (Movistar Cloud) digital services. All of this integrated for voice management through Aura, Telefónica’s digital assistant with Artificial Intelligence, the traditional television remote control, or the new voice-controlled remote that will be launched in the next few weeks.

Now Telefónica is opening this technological ecosystem in the customer’s home to other companies so that they can develop their own Movistar Living Apps. These applications run in one or several Movistar devices simultaneously in the home, and offer Movistar customers new user experiences related to its products and services.

“Our goal is to always bring more services and better digital experiences into the living rooms of our customers, including those from other companies that want to provide exclusive experiences for Movistar customers”, said Chema Alonso, Chief Data Officer of Telefónica. “In this sense, we have been able to integrate all the devices we have in the home and transform them into hardware for a kind of computer where our partners can execute their own software. To do so, we provide them with the necessary integration tools, tools supported by the artificial intelligence capabilities of Telefónica’s fourth platform.”

In addition to the Living Apps recently announced by Air Europa, Iberia, and Atlético de Madrid, which will produce exclusive video content for Movistar customers through its Living App, we are now adding La Liga’s app, which will offer complementary contents related to football matches on TV that can be seen at the same time on Movistar Home’s second screen.

Furthermore, the Fundación Telefónica announced the development of a Living App for Conecta Empleo (Connect Employment), its free training program aimed at new digital professions. For its part, the Spanish Royal Academy (RAE for its Spanish original) will develop another app in order to integrate its linguistic resources in Movistar Home as part of the LEIA (Spanish Language and Artificial Intelligence for its Spanish original). It is an initiative promoted by the RAE together with Telefónica whose goal is to empower and preserve the correct use of Spanish in technology.

Other companies from sectors such as health, banking, tourism, or e-commerce are already working on new Living Apps that will soon be arriving in the living rooms of Movistar customers.