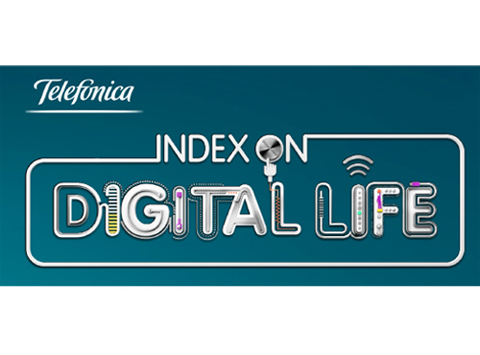 LONDON, Tuesday 7th June 2016 – Telefónica has released the most comprehensive digital index ever developed, which assesses 34 countries worldwide on the extent of their digital development. Whilst the USA tops the Index with a total score (96.3/100), it is Canada, the UK, Colombia, Australia, the USA and Chile that lead in outperformance relative to their GPD Per Capita.

The ‘Telefonica Index on Digital Life’ has revealed that the strength of digital life varies strongly across the world. Latin American countries show great progress in relation to their economic performance, in particular, Colombia, Chile and Mexico. Italy is the lowest-ranking G7 country sitting in 17th place (64.8 points), with all other G7 countries ranking in the top eight (USA, Canada, UK, France, Germany, and Japan). In the competition between the world’s largest countries by population, China (24th with 58.3) ranks ahead of India (28th with a score of 54.4).

The new Index challenges the rudimentary way the digital economy is currently measured by taking a more holistic view of the different socio-economic components that combine to establish digital life within a particular economy. Telefónica believes that digital infrastructure alone is rendered ineffective if a country lacks the capacity to leverage it for economic and societal development. As a result, the comprehensive Index formula uniquely takes into account three components, informed by 50 different pre-existing sets of public data relating to digital life across the world:

Notably, the Index suggests that bottlenecks exist in the global landscape, obstructing certain countries’ ability to achieve a successful digital ecosystem on behalf of citizens. Alongside the Index, Telefónica has today published some recommendations for governments and policy makers to improve bottlenecks and leverage strengths surfaced by the Index. The policy recommendations emphasise:

José María Álvarez-Pallete Lopez, Executive Chairman of Telefónica, said of the Index launch: “Current regulation has to change in order for countries to maximise the digital opportunity. To unleash the full potential of the digital economy, we need forward-looking, fairer public policies and a better cooperation between all stakeholders, public and private. Without this, we risk a digital divide, which could not only threaten economic progress, but also the lives of citizens globally.

“The Index on Digital Life reflects Telefónica’s belief that technology should be open to everyone. Recent reports estimate that a 10% increase in digitalisation of the economy could increase GDP per capita growth rates by 40%. We need institutions, governments, unions, enterprises, policy makers and citizens to realise the full potential of the digital world for the benefit of the society.”

Building on the success of two Global Millennial Surveys, the Telefónica Index on Digital Life has been created with world-leading scholars from London’s Imperial College Business School, George Mason University and the University of Pécs, who are acclaimed by their peer-reviewed methodology and work in the field of Entrepreneurship.

The Index will be shared with global opinion formers from Tuesday 7th June 2016. To download the full Index and corresponding report, please visit: indexdigitallife.telefonica.com

Notes to Editors: Specific Policy recommendations for each region are available on request.

The company has a significant presence in 21 countries and close to 322 million accesses around the world. Telefónica has a strong presence in Spain, Europe and Latin America, where the company focuses an important part of its growth strategy.