Telefónica’s Madrid Flagship Store was the venue for Monday’s presentation of Movistar Virtual Cycling, an international, virtual competition on two wheels which reinforces the company’s involvement in cycling and bet on innovation. 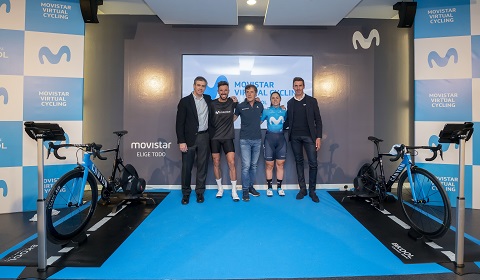 Madrid, 11th March 2019. Telefónica’s Madrid Flagship Store was the venue for Monday’s presentation of Movistar Virtual Cycling, an international, virtual competition on two wheels which reinforces the company’s involvement in cycling and bet on innovation.

Oyarbide explained that “it’s a competition and technology which are accessible to anyone who has a bike, a trainer and an electronic device, no matter where you are or which your starting level is. It’s a very nice way to identify yourself with the pro riders you watch on TV, and it’s open to both men and women, which will make many of us female riders so happy.”

In turn, Pablo Lastras said that “initiatives like this one help us get closer to cycling fans. Experiencing that effort and feeling the thrill of racing make you become a part of what we do. And this is another proof of the enormous support Telefónica has been offering to cycling and the team for so many years.”

Rafael Fernández de Alarcón underlined the “revolutionary character” of Movistar’s effort, “an initiative which helps us actívate a strategical partnership for us, cycling, in area so natural to our company like innovation and connectivity. It’s a great opportunity for cycling to continue evolving and adapting itself to new technologies.”

Signing up for Movistar Virtual Cycling is completely free. The competition will start on April 1st with several qualifying phases under two different categories: men and women. The world finals will be held during Festibike, the international bike festival held at Madrid’s Las Rozas, on September 13th – 15th.

The on-site qualifying events and finals will be held at times of the season close to the most iconic events in cycling. The users will be competing against each other on routes resembling the parcours where the most prestigious WorldTour races are held. The dates prior to / after Paris Roubaix, the Giro d’Italia, the Tour de France or the Vuelta a España, amongst many others, will serve as background for these events.

Virtual cycling is a discipline which is quickly gaining acceptance and building a strong base of users within conventional cycling fans. To set up this project, Movistar has joined forces with indoor cycling platform Bkool, who have developed a software which lets the user train and race at home, connecting a trainer to their device and taking part in online routes and competitions. The simulator is able to recreate, in a very realistic way, the conditions of the route and the races: vertical gain and drop, power of each rider, slipstream, landscapes, mountains or even different weather conditions.