Telefónica and Epic Games, developer of the popular game Fortnite, today announced the launch of the Fortnite Living App, available exclusively to customers of the Movistar+ television platform. 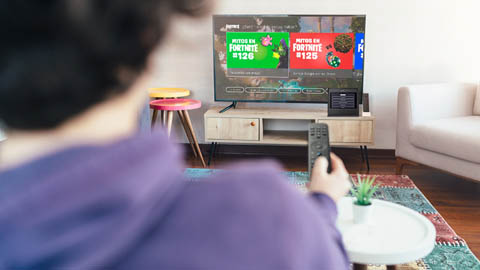 The Living Apps are television applications that offer a new digital experience to Movistar Fusion customers in more than one million homes with a UHD Decoder.

The Fortnite Living App is available in the “Apps” section of the Movistar+ main menu. Here Movistar customers can enjoy experiences and contents from Fortnite.

Among these contents can be found “Myths about Fortnite”, a series led by the gamer Davidpkami, in which he will challenge fans to see whether the many rumours that arise about the game are real or fake. The series has more than a hundred episodes. For fans of fails, Gladoop will also broadcast a weekly episode in the “No more Slurp” section, where he will analyse the best virals from social media.

Fans will also be able to learn and improve their gaming skills through the “Committed Advice” section where Gladoop will face with satire all the doubts, questions and curiosities that the users will send him through social media. In the app, fans will also find “Fiebre Creativa”, a series of videos where Hiper shows different game modes to learn all the details about vehicles, cooperative mode, zone wars, etc.

In addition, soon in the Fortnite Living App, Movistar+ customers will be able to enjoy exclusive content on their TV, such as tutorials, tips, quizzes and all the news regarding the game.

Homes that are also equipped with the intelligent Movistar Home device or the Movistar+ Voice Remote Control will have the extra advantage of interacting with the application just by using the voice and requesting it from Aura, Movistar’s virtual assistant with Artificial Intelligence.

This launch reinforces the partnership between both companies that first started in June, when they announced an exclusive agreement to facilitate purchases in games developed by Epic Games through the Movistar bill in Spain. This makes Telefónica the only telco in the world with an alliance of this kind with Epic Games.