Telefónica, named as one of Europe’s 100 digital champions

Telefónica, named as one of Europe’s 100 digital champions 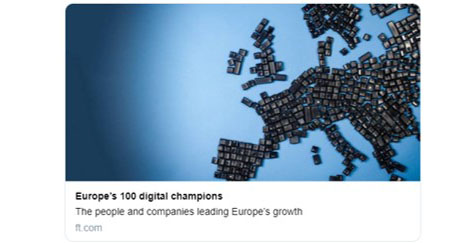 Telefónica was selected for its technological innovation and use of digital skills. Specifically, it is among the 20 European corporations recognised for using digital technologies to change the way they operate.  Telefónica’s focus on expanding its capabilities to collect and analyse data, the use of Artificial Intelligence applied to customer experience and the savings expected through digitalisation have served the company to be part of this group of European organizations leading digital transformation in Europe.

Telefónica has a long history of transformation.  The company has invested 56 billion euros between 2012 and 2017 in its global infrastructure platform to guarantee excellent connectivity for its customers. It has also deployed ultra-fast broadband in 49 million premises.

In recent years, Telefónica has strengthened and expanded its data collection, storage, analysis and understanding capabilities. It also launched Aura, an artificial intelligence-powered digital assistant to transform the way customers interact and manage their digital life with the company.  Most recently, with the launch of Movistar Home, Aura is now in our customer´s home.

Luca, the Big Data unit, is growing and having an impact on customers. For example, by analysing the combination of citizens’ transport and mobility data, Luca is helping to improve public transport infrastructure and planning projects in cities.

Telefonica’s customers are making increasing use of our digital channels. In Spain, 68% of our corporate customers use digital channels and the use of the “Mi Movistar” app grew by 43% in the third quarter of 2018, year-on-year.

Telefonica’s ongoing digitalization effort will save 300 million euros this year in gross savings, with a run rate of more than 1 billion euros by 2020.

This achievement was celebrated at an event at Google’s Digitaal Atelier in Brussels, where EU Commissioner Mariya Gabriel congratulated all the winners, alongside Matt Brittin, President of Business & Operations for Google Europe, Middle East, & Africa.

The full list of digital pioneers can be found at ft.com/europe-growth