Telefónica: betting for the Internet of the Future

As announced by the Telefónica Corporate Responsibility blog , Carlos Domingo , President of IT & D and Product Manager, Development and Innovation of Telefonica Digital , attended last... 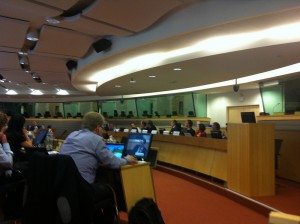 As announced by the Telefónica Corporate Responsibility blog, Carlos Domingo, President of IT & D and Product Manager, Development and Innovation of Telefonica Digital, attended last month to the meeting hosted by Commissioner Neelie Kroes, in Brussels to discuss the future Internet.

FI-PPP is a European public-private program, aims to develop a platform that facilitates the development of digital services in the Future Internet testing and actual implementation. The program involves more than 600 million euros, financed by industry and by the European Commission.

Our responsibility as leaders FI-Ware, the main project of the FI-PPP initiative, gave us a role in the encounter. Telefónica I + D leads his main project, FI-WARE, which is developing the service platform (core-platform generic enablers).

This platform simplifies and significantly reduces the time and cost of developing solutions in fields as important as smart cities, urban security, energy sustainability, logistics people and things, health solutions (e-health), agricultural and distribution business content, among others.

You can find more information here.

In his speech, Commissioner stressed the relevance of the ICT sector for the European economy as well as the responsibility of organizations to ensure the success of the European positions, that necessarily empower developers and Internet entrepreneurs. As an anecdote, recounted his meeting with start-ups over the past Campus Party Europe, which corroborated that the industry must get as close as possible to encourage entrepreneurs and implementation of their ideas, providing technologies and trainers (enablers) open.

Carlos Domingo, on behalf of Telefónica, stressed the importance of innovation closely linked to the products. He also explained the need to create and consolidate open standards, as we are doing in initiatives such as FireFox OS, and to find ways to exploit results, working with entrepreneurs.

Finally, Telefónica confirmed the commitment of the FI-WARE project, led and coordinated at European level I + D. “Telefónica-said-will find the actual operating results of FI-WARE, in line with our strategy of developing products and open standards. Moreover, we will promote its use among entrepreneurs, through instruments such as Wayra “.

During the meeting, differentiation emphasized the FI-PPP program, operating close in time, compared to traditional programs of R & D long term. Finally, we discussed the areas where accelerate the exploitation of its results: Applications for Smart Cities and the Internet of Things.