Technology and society: from the age of knowledge to the age of uncertainty

Telefónica participates in the event "Technology and Society" to debate about the role of companies in the digital age.

El País Retina brings together professionals from different backgrounds, ranging from academia to the public and private sector,to debate on ethics and technology in the “Technology and Society” event promoted by Telefónica, Santander, Atento, and the Red Eléctrica Group.

Do we need to rethink our institutions for the digital age?

Beth Noveck, Director of The Governance Lab and former CTO of the Barack Obama administration, upheld the first debate by wagering on technology to modernise democracies and improve political participation processes, through what she calls “collective intelligence”. This phenomenon is not without challenges, as it was pointed out by philosopher Victoria Camps, who posed the question: “If algorithms could predict election results without a margin of error, what’s the point of voting? It would be as if they were predetermined”.

At Telefónica we believe that technology can contribute to improve people’s life. All we have to do is look back a few decades and think about how mobile telephony and the Internet have completely revolutionised the way we communicate, travel, and work. Internet’s case is self-explainatory, as evidenced by initiatives such as Internet para Todos Peru, our project aimed at briging the digital gap between connected and unconnected citizens in the Peru.

Generating trust is currently the main challenge for technology. Mitchell Baker, President and Co-Founder of Mozilla stated that: “In the past, many people didn’t care if they were spied upon, or if their data was used, as long as the product they were offered was free. Fortunately, we have now begun to understand the risks of such an approach”.

Shortly after, Nick Snicek, professor of Digital Economics at King’s College London, insisted that the Artificial Intelligence feeds on a huge amount of data provided by users, and that companies understand the value they generate. Nonetheless, in order to ensure that citizens to have control over their digital lives and for a trust-based digital environment to become a reality, people must be aware of the implications of data-transfering.

Company’s commitment with the digital challenge

Ángel Mahou, Corporate Director of Transformation and Technology at Red Eléctrica, José María Pérez, General Director of Atento Spain, and Christoph Steck, Director of Public Policy and Internet at Telefónica, contributed with their visions to the commitment of private organisations with digitalisation. Christoph Steck started the conversation by emphasising the importance of ethics for companies:

“Ethics must be in the centre and at the origin of business activities. Financial results are not the only thing that matters any more, but rather the impact of our activities on society.”

This issue is especially important for technology companies that operate with Artificial Intelligence. As Steck pointed out, AI has to be fair and non-discriminatory, ensuring transparency regarding the processing of the data we are using. Telefónica’s commitment is clear in two initiatives: the Manifesto for a New Digital Deal to achieve a human-centric digitalisation, and the Ethical Principles of Artificial Intelligence. Both initiatives were launched in 2018 in order to make sure that these ideas did not become mere declarations of intent. This shows Telefónica’s commitment to acting in a responsible manner.

“Societies have changed and so has the role of companies. Those that do not define as a corporate value to have a positive impact on its societies will dissapear.” 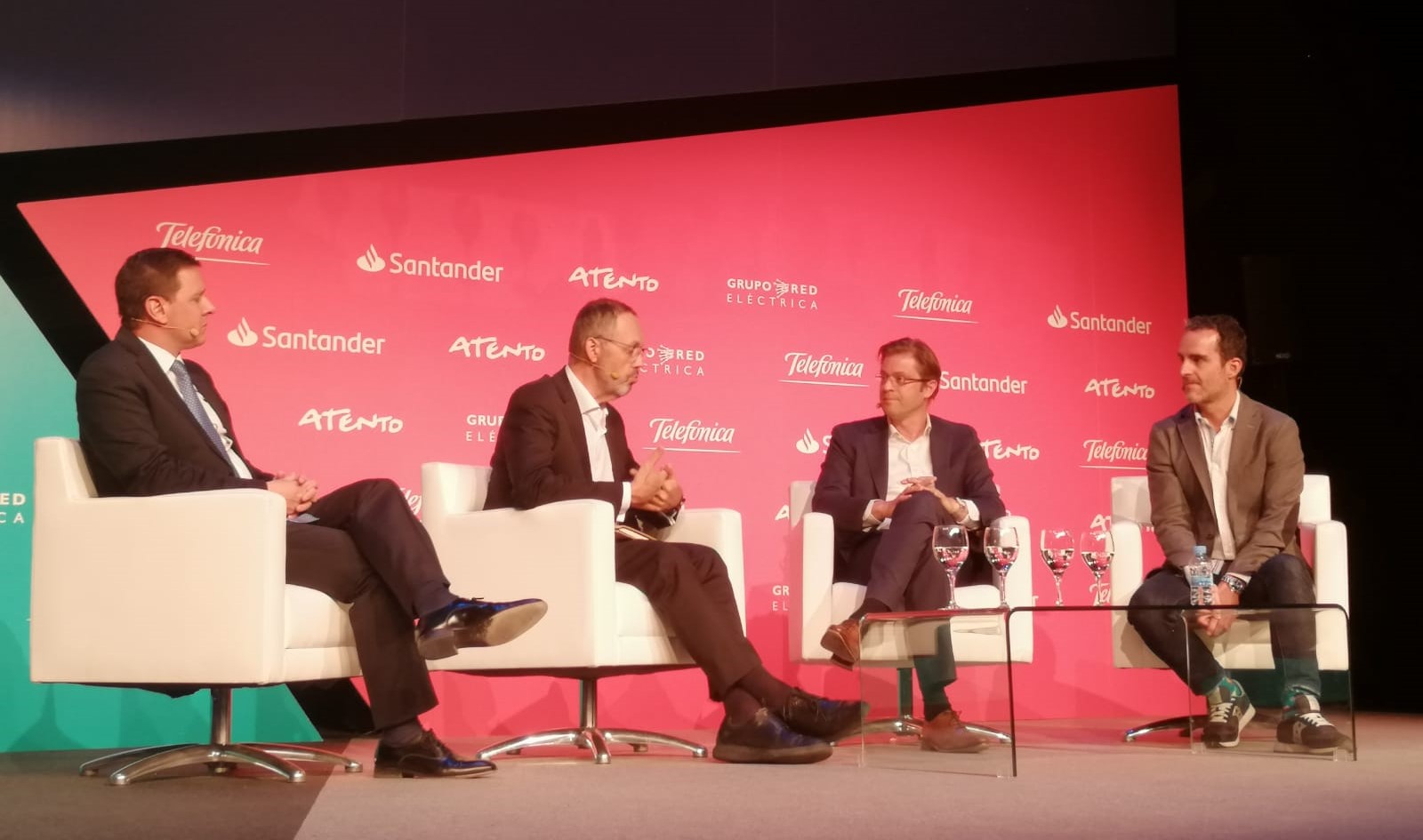 In addition to the role of companies in the digital age, the future of work was repeteadly addressed during the event. Atento’s executive indicated that the main challenge of the industry is to “relocate” workers who perform a task that we can automate, without increasing the unemployment rate. Meanwhile, Ángel Mahou shed light on the matter by pointing out that new jobs will be created, and we must be prepared for them.

The key in this case is training. Regarding this issue, Christoph Steck insisted on the need for continuous training throughout our lives (lifelong learning) in order to be prepared for the digital age. Education in competencies and digital skills thus becomes a fundamental tool for the transition from an analogue society to a digital one. An innovative example of this approach is Karma, Telefonica’s program, a system based on blockchain technology for promoting corporate training among employees.

Europe and the digital transformation

In the panel dedicated to debating whether technology does or does not have an ideology, Eduardo Madina, director of KREAB’s research unit and ex general secretary of the PSOE in the congress and Álvaro Nadal, Madrid’s MP of Partido Popular and former minister of Energy, Tourism and Digital Agenda, participated on it. It became clear that Europe is losing ground in the technological field. Compared to other regions that are fully wagering on innovation, such as America and Asia, in Europe we need to lead technological changes so that our societies can prosper. These ideas were already raised by José María Álvarez-Pallete, chairman and CEO of Telefónica, in Brussels, where he recalled that Europe needs to regain its digital leadership, and the way to do it is by favouring regulations adapted to the reality of the XXI century that allow us to be competitive.