As unveiled in the Telefónica's Sustainability and CR blog , the Telefónica Global Millennial Survey was presented within the most prominent conference in the Czech Republic, Forum... 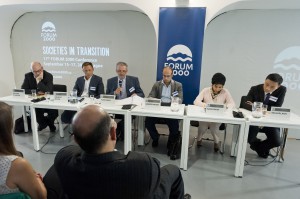 As unveiled in the Telefónica’s Sustainability and CR blog, the Telefónica Global Millennial Survey was presented within the most prominent conference in the Czech Republic, Forum 2000, and served as base for argumentation for a panel discussion about the new generation in politics. Frédéric Michel, Telefónica global director of public engagement, participated in the debate “Tahrir, Taksim, Sao Paulo and Elsewhere: A New Generation in/of Politics?” with relevant international speakers.  The Egyptian blogger and activist and Nobel Peace Prize nominee, Mr. Maher;  the chairman of the Bahrain rehabilitation and anti-violence organization, Nada Dhaif; the Chinese journalist and political blogger, Michael Anti; and the Google’s head of communications and public affairs for free expression in Europe, Middle East and Africa, William Echikson; shared their experiences with recent protest movements led by the Millennial Generation.

According to the largest and most comprehensive global study of adult Millennials conducted to date, commissioned by Telefónica in partnership with the Financial Times, 40% of Millennials believe they can make a global difference. Speakers discussed about the emergent social and political movements mostly driven by youth, technologically savvy; with economic, social or even environmental motivations and political demands; highly critical to the existing system, and missing a clear Havel or Mandela-like leader. They are empowered by the use of technology and social media, both for organizing themselves and for spreading information. Globally 76% of Millennials confirm they own a smartphone and spend an average of 6 hours online every day.

Participants in the panel discussion remarked the importance of social media and new technologies to communicate worldwide easily, serving as important tools to support the recent revolutions driven by youngsters.  A common viewpoint was that those online features are mere communication channels, not the revolution drivers, and could become a “fast food” that last only for several weeks and need a strong basis to remain in time.

The 17th annual Forum 2000 Conference was held September 15–18, 2013 in Prague and other European cities. Since 1996, the conference has been realizing the vision of Václav Havel, Elie Wiesel, and Yohei Sasakawa, bringing together people of different cultures, religions and professions to discuss ways to preserve and enhance democracy, respect for human rights, tolerance and freedom. Forum 2000 have attracted a number of prominent thought leaders, Nobel laureates, former and acting politicians, business leaders and other individuals, whose common denominative is experience with bearing responsibility. This year’s conference counted on the attendance of His Holiness the Dalai Lama and Aung San Suu Kyi.