Social enterprises work. They are a win-win game, good for the businesses and good for the society Social economy is an important pillar of the European economy, representing some 10% of... 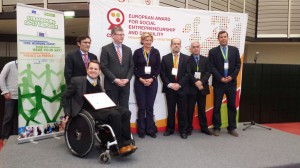 Social economy is an important pillar of the European economy, representing some 10% of GDP. More than 11 million workers (4.5%) of the active EU population are employed in the social economy. One in every four new businesses set up each year is a social business.

Social enterprises offer a model for 21st century business that balances financial, social, cultural and environmental needs. Social entrepreneurs are agents of change who are passionate about improving the lives of people and communities.

This conference was based on the proposal of the European Commission launched in October 2011 by 3 commissioners: the French Barnier, the Italian Tajani and the Hungarian Andor.

To conclude the two-day event, a final declaration summarising the outcome of the discussions has been adopted.

According it, legal frameworks, implementing the access to finance, business start-up and development support, improving training and education focusing and public procurement in social innovation are essential.

It is clear that after the economic crisis Europe need to reinvent itself with more green growth, social innovation and a better social cohesion between the Member States to avoid the “two speed Europe”. In the times we live with the challenges of an ageing population, youth unemployment, climate change and increasing inequalities, Europe needs more social enterprises. We need to act NOW, stop walking the talk.

See here the Strasbourg Declaration on Social Enterprise. More than 360 persons have signed the delaration so far!

This post has originally been published in the Sustainability and CR blog of Telefónica. You can click here to read it in Spanish.