Moisés Naím: “Nowadays power is more difficult to use and easier to lose, more ephemeral” 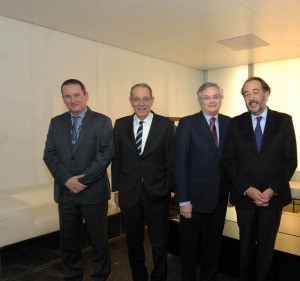 Last week, we were fortunate to attend a conference by the analyst and columnist Moisés Naím and Javier Solana, President of the Aspen Institute Spain, held at Distrito Telefónica, the company’s headquarters in Madrid.  The purpose was to spell out the main ideas from Naím’s most recent book entitled “The end of power”, which was chosen by The Washington Post as one of the literary works of the year.

Naím, a global citizen and conscious intellectual, according to Solana, explains that “something is happening to power.  Nowadays it is becoming more difficult to use and easier to lose, more ephemeral “.  In his opinion, this is not only occurring in politics but also in private companies, in all sectors.  To illustrate this, he referred to the fall of or crisis involving governments, large corporations and banks that previously seemed untouchable.  With regard to business, “a 2010 study found that while twenty years ago companies had, on average, a 20% chance that their reputation would experience some disaster within a five-year period, today that probability is 82%”, Naím explains in his book.

Why is power deteriorating? “Due to the huge number of changes that are occurring”, changes that the expert assimilates to what he calls the revolutions of “more” (more people, greater life expectancy, more education, income, etc.), of mobility (the “all” is also increasingly expanding: people, money, information are moving … in part owing to new technologies and means of communication) and of mentality (increasing importance is being given to transparency , the rights of ownership, minorities and even minority shareholders). These revolutions are also reducing the effectiveness of the barriers behind which those who hold power through force are shielding themselves, of code (originated in moral obligation), and of persuasion and/or reward for obedience (see picture).

To whom is power being lost? “In the modern world, it is more likely that the weak and not the strong are winning”, says Naím. For example, nowadays, “the military technology of the 21st century with the greatest impact involves “do-it-yourself” bombs and remote-controlled drones. Competition, threats and risks now tend to come from places where we least expect them.  Hence, according to Naím, there is a need “to have a peripheral vision that allows us to become aware of what is happening in more remote areas of the world and which may have an impact on a project or our business”. 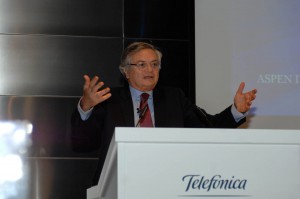 What is important in this process?  To find legitimacy in an environment of mistrust and foster agility, which is more relevant than size. “Nowadays there are many young people who come together and discover that they can form a company with major goals. And even 11-year old children can manage to change things”, Naím points out, referring to the revolution brought about by a young girl from the United Kingdom, who published photos of junk food that was being served at her school on her blog.

Of course, as Solana says, “managing is complicated”. Politicians have to make policy for public assets, more than for private assets. In fact, “due to globalization –Naím said- many problems have arisen that cannot be covered by one state and which require effective international collective action.  The most dangerous deficit in the world is the gap between demand and supply”.

So what will happen then in the future? According to Naím, the world is now on the verge of an explosion in political innovation. “Today everything is being transformed by technology, from the moment we wake up until the time we go to bed. Innovation is everywhere, except in the way in which we govern ourselves”.

This post has been originally published in the Sustainability and Corporate Responsibility Blog of Telefónica. You can read it in Spanish here.