Day 1 is already over, and I almost did not have the time to realize about it. Tuesday started really fast with the interesting Implications: post-Snowden Internet localization proposals... 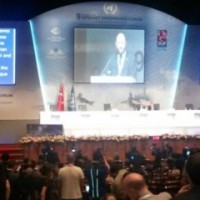 Day 1 is already over, and I almost did not have the time to realize about it. Tuesday started really fast with the interesting Implications: post-Snowden Internet localization proposals session. The session could have lasted twice as long and still many topics would have not been covered. The revelations of the Snowden case have put localization of internet users in the spotlight once we were aware of the massive surveillance taking place. Many interesting facts, opinions and comments were shared during the session. As Mozilla stated the implementation of mandatory wide localization of Internet users is at odds with the Open Internet principle fully supported by all. Many possibilities were mentioned as ways to protect users privacy, such as the implementation of fully national systems –e-mail service offered in Germany by German companies assuring keeping all data traffic within the country for domestic messages–, strong legal privacy protecting legislations –as the one in place in Switzerland- and even encryption, being clarified that encryption’s aim was not to make surveillance impossible, but to make it much more difficult and expensive–. Not to make this post too extensive, just two additional comments that seemed to raise some eyebrows: first, that Governments were fostering local storage of data and IXPs claiming to prevent surveillance by foreign countries, whereas their real objective is trying to increase surveillance over national citizens; and second, showing localization may not always be implemented with evil objectives in mind, but to help to implement a truly level playing field: localization of users can help to prevent tax avoidance by global companies as revenues would be more easily assigned to the country where they have been generated.

The next session I attended to, The Role of IXPs in Growing the Local Digital Economy, explained who the deployment of local IXPs could help growing the economy through Internet adoption in not connected or lowly penetrated areas. When speakers were asked on the costs of deploying an IXP and the time needed to recover the investment, the answer was a little surprising, though quite sensible: the physical cost of deploying an IXPs is not high (4K$ to 40K$),with the investment been fully recovered in a timeframe ranging for two days to three or four weeks thanks to transit reduction costs; but if this cost was deemed relevant, it would be better to forget about it straight away, as the deployment of the network needed to take fully advantage of the local IXP would imply multiplying the previous figure by 100, 1,000 or even more.

The Network Neutrality Dynamic Coalition session counted with the always vibrant participation of Vince Cerf, and it probably advanced what we could expect for the Main session on Net Neutrality taking place 24 hours later. The session room was fully booked, even many attendees sat on the floor by the side corridors. Internet inventor made a statement that could surprise many: he did not agree with the principle all bits need to be treated equally, and added it is not the same downloading 100 MB in one week than in one second, and as such that payment of a higher amount for a faster service is not against net neutrality. An overview of the legal US and EU framework were provided, together with a reference to the prohibition of zero rating tariffs in the Chilean market. Some hints were provided to clearly frame the Net Neutrality issue, whether it referred to traffic within networks, interconnection among networks or expanding it to the concept of platform neutrality. Though this last concept does deal with the Net Neutrality issue with a wider scope addressing the whole of the Internet value chain with the aim of securing an Open Internet, it was almost qualified as an attempt to deviate the attention from Net Neutrality. Transparency mechanisms in competitive markets were deem enough to guarantee Net Neutrality by some participants, with the Russian market provided as a case example, but not everybody agreed. Given that most of these issues will be discussed more in depth during the remaining Net Neutrality sessions, and of course at the main session tomorrow afternoon, I missed some discussions on the Network Neutrality Dynamic Coalition itself, its mandate and goals, its agenda for the timeframe running up to the next IGF in Brazil, how it is going to improve the IGF, how its work will be presented to the IGF; and, of course, how its processes are design to guarantee a truly open, inclusive and representative multi stakeholder participation as provided in the principles of the Netmundial statement. My recommendation: don’t miss the Main Focus Session Network Neutrality: Towards a common understanding of a complex issue tomorrow from 14.30 to 17.30 – Istanbul time at the main meeting hall.

The afternoon was fully occupied with the IGF Opening session. We had keynote speeches from a wide Ministerial representation coming from all around the world, to mention just a few: Azerbaijan, Costa Rica, Colombia, European Commission, Japan, Indonesia, Latvia, Santa Lucia, Russia, UK, USA and of course, the host country, Turkey. In addition key Internet Government related institutions and industry associations did have their respective chairmen addressing the audience, such as ICANN, ISOC, WEF and ICC Basis. I would highlight one topic that almost all of them covered somehow: the relevance of the IGF and how its continuity should be supported and guaranteed by all. Let me also briefly comment on the inspiring keynote from the Colombian Minister of IT and Communications, explaining how he decided to become a telecommunication engineer thirty years ago just today. He had the dream to fight poverty in Colombia through technology. That dream is today as relevant and alive as it was when he took that life determining decision thanks to the Internet.

Tomorrow will certainly be an exciting day as Net Neutrality sessions will last all day long. It seems many participants in the IGF 2014 have come all the way to Istanbul just to be present during these sessions. The Net Neutrality workshop rooms will be fully booked for sure. Don’t be late if you want to take a sit!