Getting ready for the 2012 Telefónica Ability Awards!

The Telefónica Ability Awards , the awards programme of Telefónica that recognises best business practice for the inclusion of people with disabilities as customers, employees... 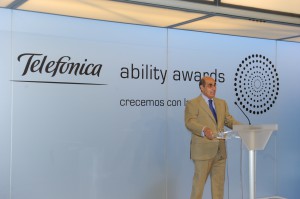 The Telefónica Ability Awards, the awards programme of Telefónica that recognises best business practice for the inclusion of people with disabilities as customers, employees and members of the community; has selected the 50 final candidates for its 2012 edition.  The purpose of these awards, which were launched in Spain in 2010 with the guarantee of their success in Ireland, is to publicly recognize the companies and institutions that develop these business practices in their value chain. The “Telefónica Ability Awards” come from the Ability Awards created by Caroline Casey in 2004.

This week, the preliminary Jury of the Telefónica Ability Awards has met at Telefónica headquarters to select the 50 best nominations for the second edition of these awards. The selection process began this past 27th October and will end on 6th September when the Final Jury ratifies these 50 finalists and selects the winners of the six main and three absolute categories.

The Preliminary Jury, made up of representatives from 35 organizations that represent the public sector, large and medium-size companies, trade unions, the academic world, multilateral agreements, disability associations, as well as the media, has had access to the reports prepared by PwC and has evaluated each one of them in order to select the 50 finalist companies and, therefore, henceforth deserving of the title of ‘Ability Companies’.

Luis Abril, Chairman’s Technical Office Director of Telefónica, stated to the members of the Preliminary Jury that “we are living in difficult times for everyone, so now more than ever it makes sense to include disability in the value chain of companies and institutions and gradually do away with a welfare model”. Many companies are already aware of this and it is something that can be noticed in this second edition of the awards, which has received 414 nominations from 232 different organizations: “The current crisis has not diminished the quality of proposals which, in PwC’s assessment, is much greater in this edition”, Abril indicated.

Within Telefónica itself, the best practices that were identified in the first edition of the Telefónica Ability Awards have served, in Abril’s words, to improve the Telefónica Accesible project: “In some cases, to promote innovation through ‘design for all’, in others, to consider improving the climate by taking disability into account, and still in others, to identify business opportunities based on the potential of ICTs to meet the needs of this special group”.

The Chairman’s Technical Office Director recalled that we are talking about 80 million people in the European Union who have a mild to severe disability, a group that will increase in the coming years due to the ageing of the population and to which Viviane Reding, Vice-President of the European Union, would like special attention paid through the European Accessibility Act. The act, which will be submitted by the end of the year, will aim to ensure that products and services as well as buildings and public spaces are more accessible.

Click here for the full text of Luis Abril’s presentation