As announced in a previous post , the Financial Times-Telefónica Millennials Summit presented last 4 and 6 June – in London and Sao Paulo respectively – the outcomes of the Global... 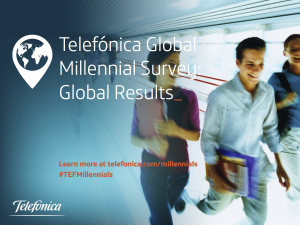 As announced in a previous post, the Financial Times-Telefónica Millennials Summit presented last 4 and 6 June – in London and Sao Paulo respectively – the outcomes of the Global Millennium Survey.

The Global Millennium Survey, which is the most comprehensive portrait of 18 to 30 years old ever commissioned (i.e. 12,000 adult Millennials surveyed in 27 countries) aims to know if the members of the Millennial Generation think that they have good opportunities to innovate and become entrepreneurs, what do they think about the role that technology has in their lives and what is their social sensitiveness.

Among the key findings of the Global Millennium Survey, we can highlight the following:

All these findings will allow us to offer the Millennial Generation the products they value the most and the tools they need to take the best possible benefit of technology. In addition, these outcomes will allow us to boost innovation and entrepreneurship.

For further information on the Survey findings click here.