We have recently seen some debates surging around policy models in USA and Europe. Both geographies are at a policy breaking point, USA debating competition and Open... 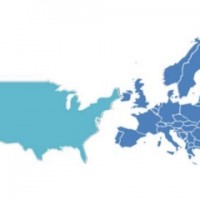 We have recently seen some debates surging around policy models in USA and Europe. Both geographies are at a policy breaking point, USA debating competition and Open Internet policy (never ending “net neutrality” discussion) and the EU with a new Commission, revisiting the existing regulatory framework and Telecom Single Market proposals.

Policymakers are well aware that regulation has a big impact on business environment, investment interest and market innovation, whether directly or indirectly, and with potential unintended consequences of regulatory intervention.

In this post we will compare the Regulatory models and policy objectives in the two regions. A following post will show how Europe is lagging further and further behind USA and many countries in Asia

In the last decade, each region in the world has adopted different public policy objectives and models for telecom markets.

Unbundling was first established in 1996 to open up markets to competition. Spectrum caps were originally viewed by the FCC as one mean to “ensure effective competition in early stages of mobile market development”.

Regulatory policy changed starting in 2003 to a market led approach, with lighter spectrum control, reviewing spectrum caps, enabling a dynamic secondary market, and abandoning unbundling. In this regard Lowell Mc. Adam, Verizon’s CEO has recently said “In the U.S. in the early 2000s, we saw the flow of investments pick up when U.S. regulators removed onerous regulations that limited phone and cable companies from competing against each other. Not surprisingly, this is when high-speed broadband to the home took off”. 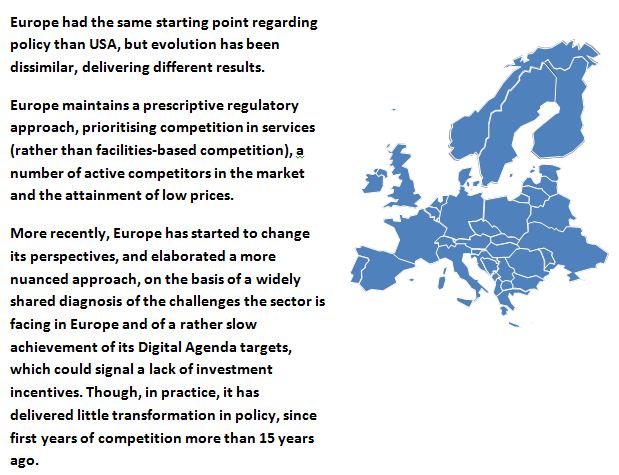 First European framework was established in 1998 to open fixed networks to competition. Broadband unbundling was set in 2000 by a European Regulation, focused on copper since at that time: “The provision of new loops with high capacity optical fibre directly to major users” was considered to be “a specific market that is developing under competitive conditions with new investments”.

Since then, Second and Third Framework have been approved in 2002 and 2009, with little change on policy objectives of promoting competition, by imposing wholesale obligations and price controls on traditional players, later extended to also include new fibre technologies. While in the US the competition with cable companies favoured the decision of a strong deregulation of Telcos, Europe has not followed the same path, despite Cable and Telecom fierce competition. Moreover, with a pushing digital industry transforming the competitive service landscape and disrupting existing business models, the initial rules, basically maintained, create an unleveled playing field between OTTs and Telecom.

Europe is viewed as having strict consolidation rules, privileging analysis on market shares and number of competitors, in each European country.

However, the good news is that since 2012, European regulators and politicians have increasingly recognised the competitive advantage and productivity enhancement that deployment of the latest telecom infrastructure can provide, and start making steps to see policies that will foster the necessary investments.

Among these steps to increase certainty in the framework for NGA & Spectrum the “Recommendation on consistent non-discrimination obligations and costing methodologies” (2013)as well as spectrum proposals on Telecom Single Market outstand. A mention can also be made to the recognition of the need to address a level playing field between the rules that apply to OTT services compared to telecom services (Communication on the Telecommunications Single Market), or steps towards Portability of digital life (EU Council Conclusions – 24.10.2013) as changes in the way new competitive digital market is viewed. These are all welcome steps but seem still slow and timid movements compared with the needs.

Diagnosis of the needs has changed, though Europe still maintains a prescriptive regulation, with little modifications on delivery!

The new European Commission brings a new opportunity to adjust diagnosis and delivery. The new European Commission should act quickly. Europe needs to deliver on the most pressing policy topics among which the following outstand: how to attain the Digital Agenda objectives, ensuring that regulation supports investment, establishing a clear deregulatory agenda and ensuring that Europe excels with a modern Spectrum Policy framework; achieving a reasonable Digital Open Internet framework (“Net neutrality”) allowing innovation for consumers; a Level Playing Field when it comes to rules applied to operators and OTTs; as well as allowing market players to find the appropriate market structure, for example by means of Consolidation. Europe needs the delivery!