Numerous are the reports and news in which they indicate that mobile broadband is the future and that mobile data will grow incredibly in some years. This future is strictly linked to...

Numerous are the reports and news in which they indicate that mobile broadband is the future and that mobile data will grow incredibly in some years. This future is strictly linked to LTE.

4G (or LTE – Long Term Evolution) is the fourth generation of cellular wireless technology. Some operators have already initiated their way to 4G worldwide. Telefónica O2 in UK is one of them and now provides the fastest possible wireless connections in parts of London as a trial. O2’s 4G network is so fast you can download a 500MB file in just 60 seconds. Just imagine how it could transform downloading and streaming music and films!

This London trial will run from November 2011 until June 2012. Over 25 sites across the capital have been built, with the network stretching over a vast 40 square kilometres. From Hyde Park in London’s West End, across to The O2 in Greenwich, O2’s 4G network has been carefully planned to provide coverage to key London locations including Canary Wharf, Soho, Westminster and the South Bank.

Here are the areas covered by the trial: 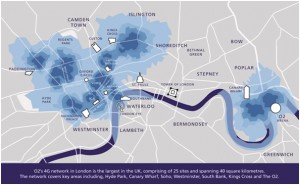 To ensure the best possible trial of its 4G network, O2 has equipped businesses with Samsung B3730 mobile broadband dongles, as well as 4G wireless hotspots and handsets. With John Lewis and The IET (Institution of Engineering and Technology) taking part, among many others, businesses across the capital can enjoy the fastest wireless internet connections with O2.

And it’s not just the city’s businesses that can benefit from O2’s 4G trial. With dedicated 4G sites providing coverage to The O2 Arena, and live music video and film streaming demonstrations taking place at the O2 Lounge and O2 Store, visitors and customers of The O2 can also take a look at what 4G promises to deliver in the coming months and years.

Throughout the trial, which will last until next summer, O2 will be collecting real-time network performance data, as well as direct feedback from its customers. All the results will then be used to shape O2’s future plans for how it will direct and offer its forthcoming commercial 4G network, after the Ofcom 4G spectrum auction takes place next year.

O2’s 4G network trial is a glimpse into the future!

For more information, have a look at: