Telefónica’s net profit increases 9.6% in the first nine months of the year, to 2,439 million euros

“Third quarter results reflected the solid execution of the main strategic priorities set for the year. Thus, our organic growth is consistent and sustainable, highlighting the improvement in revenue growth trends and the increased OIBDA, despite the negative impact of the new regulation in Europe. Additionally, transformation remained key and the focus on digitalisation amongst the company’s different operating areas has contributed to increase our differentiation and become more efficient, and will enable us to pave a new way to interact with our customers through cognitive intelligence while improving resource allocation. Finally, we continued strengthening our balance sheet position with a clear advance in de-leveraging the company thanks to growing cash-flow generation”.

Telefónica today reported its financial results for the January-September period, showing a net profit of €2,439m (+9.6%) and a free cash flow generation of €3,226m (+ 39.2%). The third quarter of the year registered a sustained and profitable organic growth, the ongoing transformation process of the company, and a strengthened balance sheet, thanks to strong cash generation and a -4.8% net debt reduction, year on year. Telefónica has also reiterated the guidance and dividend announced for 2017.

The quality of the group’s customer base continues to improve in the third quarter of the year, as reflected by the acceleration of the average revenue per customer (ARPU + 4.3% organic year-on-year) and churn stability (+0.1 pp). Total accesses stood at 344.5 million at September 30, with generalized year-on-year growth, in line with the previous quarter. Thus, the company shows growth rates in LTE customers (1.6 times), mobile contract accesses (+ 5%) and smartphones (+ 8%). FTTx and cable customers (+ 21% up to 10.5M), which is 49% of the total for fixed broadband accesses, with coverage of 42.8m premises passed (+15% y-o-y), and Pay TV accesses (101k).

In July-September currencies reduced y-o-y growth of revenues by 6.1 p.p. and OIBDA by 5.4 p.p. (-1.1 p.p. and -0.7 p.p. respectively in January-September). Nevertheless, it is important to highlight that the negative impact of FX evolution at OIBDA level in the first nine months of the year has been offset in terms of cash generation, since depreciations also decreased payments in euros related to CapEx, taxes, interest and minorities.

Revenues decreased 2.5% y-o-y in the quarter to €12,754m (€38,846m in the first nine months; +1.4%). In organic terms, however, revenue growth accelerated to 4% (+2.9% in January-September), driven by improved contributions from T. España, T. Deutschland y T. Hispanoamérica. Excluding the negative impact of regulation (-1.3 p.p. in the quarter, primarily because of “Roam Like At Home”- RLAH), revenues increased by 5.3% y-o-y organic in the third quarter (+4.0% in January-September).

Operating income before depreciation and amortization (OIBDA) totalled €4,095m in the third quarter (-1.9% y-o-y) and €12,274m in the first nine months (+2.9% y-o-y). In organic terms, OIBDA grew 2.8% y-o-y in July-September (+3.8% in January-September), reflecting the positive revenue performance, costs containment efforts, synergy capture and efficiencies from the transformation process. Compared to the previous quarter, OIBDA slowed down its y-o-y growth by -4.4 p.p., primarily due to a tariffs seasonality effect in Argentina and Colombia and the strong RLAH impact on T. UK and T. Deutschland. Excluding the impact of regulation, -2.3 p.p. in the quarter, OIBDA would have increased by 5.2% y-o-y in organic terms in the quarter (+5.3% in January-September).

CapEx in the first nine months (€5,962m; -0.9% reported; -2.3% in organic terms) continued to focus on expanding 4G and UBB networks, and the simplification and digitalisation of processes and systems, also reflecting integration synergies and including €502m in spectrum and licences.

Telefónica maintained its focus on accelerating the digital transformation of the company to contribute improving its efficiency and growth to the maximum. In order to increase the value of network and connectivity, UBB rollout continued at a strong pace, 42.8m premises passed with FTTx and cable (+15% y-o-y); 18.0m in Brazil (FTTx and cable), 18.6m in Spain (FTTH) and 6.2m in Hispanoamérica (FTTx and cable). 4G coverage increased to 69% (+11 p.p. y-o-y). 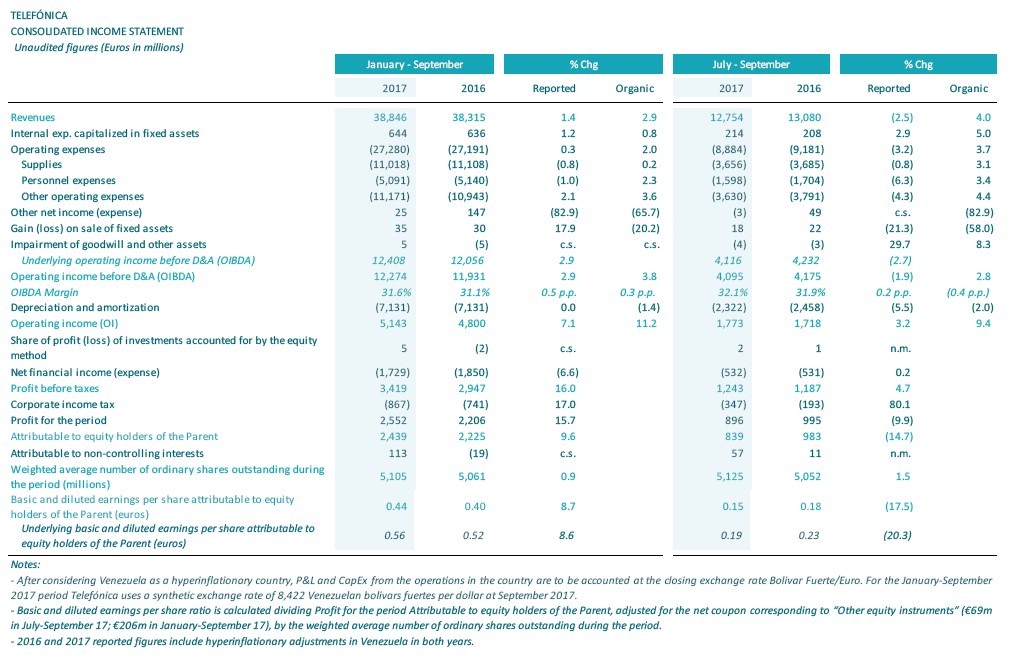 The company closed the third quarter with a stronger balance, thanks to a solid growth in free cash flow to € 3,226m in the first nine months of the year (+39.2% year-on-year).

Net financial debt at September (€47,222m) was reduced by 4.8% y-o-y (€1,265m in the third quarter), primarily due to free cash generation and the lower value in euros of the net debt in currencies.  Debt will be further reduced by an additional €1,275m in the fourth quarter, following Telxius 40% stake sale, closed this week, and would stand at €45,947m at September.

During the first nine months of 2017, the Telefónica’s financing activity amounted to approximately €8,227m equivalent (without considering the refinancing of commercial paper and short-term bank loans) and focused on maintaining a solid liquidity position, and refinancing and extending debt maturities (in an environment of very low interest rates). Therefore, as of the end of September, the group has covered debt maturities for around the next two years. The average debt life stood at 7.85 years (compared with 6.77 years in December 2016).

Guidance 2017. The Company reiterated the dividend and its guidance announced for 2017: revenue guidance growth (>1.5% despite the negative impact from regulation, approximately 1.2 p.p.); OIBDA margin (y-o-y expansion up to 1 p.p.) and CapEx/Sales excluding spectrum (around 16%).

Telefónica España. Commercial activity has progressively improved in the last three months, reflecting the focus on value and the results of the two new “Fusión+” options launched in July (“Fusión Series” for €60 and “Fusión #0” for €45), which incorporated the TV service and its functions to the entire convergent portfolio.

Third quarter revenues totalled €1,850m and improved their trend to -1.3% y-o-y (-3.1% to €5,392m in the nine months period). Mobile service revenues decreased 3.6% y-o-y to €1,344m (-3.3% for January to September), on strong regulatory headwinds (MTR and RLAH), OTT-trends, the higher share of wholesale revenues and the ongoing legacy base rotation. Ex-regulation, MSR performance improved sequentially 0.3 p.p. to -0.1% y-o-y. OIBDA reached €457m in the quarter and fell 0.1% y-o-y (€1,318m in January-September; +1.7% y-o-y) reflecting investments in the market to drive commercial momentum with the offers of the O2 brand and regulatory effects (-€28m in Jul-Sep, mainly “RLAH”). On the other hand, incremental synergy related savings had a positive contribution of ~€40m (~€115m in January-September). After nine months of execution, guidance range for FY 17 OIBDA is refined to “Flat to low single-digit % growth”. OIBDA margin stood at 24.7% in the quarter (+0.3 p.p. y-o-y).

Telefonica UK. Telefónica UK delivered another solid quarterly performance. The company continued to demonstrate the success of its customer-led, mobile-first strategy with more connections, sustained leading churn levels, improved customer metrics and robust revenue growth ̶ excluding the impact of regulation, with a significant effect from “Roam Like At Home” (RLAH) in the quarter.

CapEx amounted to €604m in January-September (+0.6% y-o-y). Ongoing network investments continued to improve the customer experience as well as the rollout of LTE with 98% outdoor population coverage (+5 p.p. y-o-y) reached as of September; this helped drive LTE base growth. Operating cash flow (OIBDA-CapEx) decreased by 0.9% y-o-y in the first nine months to reach €658m.

Telefónica Brasil. In the third quarter of 2017, Telefónica Brasil once again posted solid revenue and OIBDA growth with margin expansion thanks to its differential assets which place the Company as the benchmark operator in terms of quality and customer satisfaction. This positioning was reinforced during the third quarter with the accelerated deployment of 4G, enabling the company to achieve a population coverage of 76% (leaders in most Brazilian states) and of FTTx, with 18.0m premises passed (216 cities covered as of September, 12 new in 2017).

In the third quarter of the year, Telefónica Hispanoamérica accelerated its y-o-y revenue growth and maintained a solid OIBDA growth thanks to the increase on high-value access penetration coupled with the execution of efficiency measures. All this translated into a strong operating cash flow growth in the first nine months of the year.

CapEx amounted to €1,853M in the first nine months (+0.8% y-o-y) and was mainly allocated to the improvement and deployment of 4G and fixed networks. Operating cash flow (OIBDA-CapEx) amounted to €825m with a strong y-o-y growth of 26.8%.