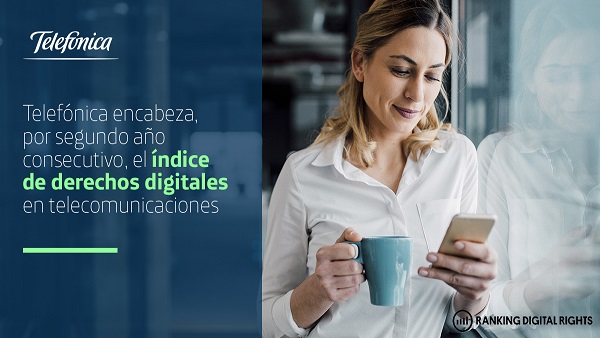 Madrid, 24 February 2021-. Telefónica leads  the 2020 Ranking Digital Rights Corporate Accountability Index, in the telecommunications sector, thus topping this ranking for the second consecutive year. This index evaluates the transparency and commitment of technology and communications companies in terms of governance, privacy and freedom of expression. According to RDR, “Telefónica has made steady progress on a number of different policies that we evaluated since we added it to the RDR Index in 2017.” Likewise, the ranking stresses how the company has improved since last year, among other things, in the management of its customers’ personal data, the transparency about security policies/processes and the information published in the Transparency Report. Overall, Telefónica has improved by 4.3 points compared to the indicators evaluated last year.

In the Governance section, Telefónica once again tops the ranking of both telecommunications and Internet companies due to its strong commitment to human rights, its solid due diligence practices and its complaint and remedy mechanism. What is more, it is one of only two companies with a public commitment to respect human rights in the development and use of algorithmic systems.

In the Freedom of Expression section, the index finds that Telefónica is the telecommunications company that most information publishes on policies and processes on this subject matter. Its Transparency Report, which includes detailed information on how the company responds to requests from the Competent Authorities (legal interception, metadata, content blocking and geographic or temporary suspension of service) has found special mention. The granular information provided in the report is rated very positively. Telefónica is one of only few telecommunications companies that publishes the number of requests received in relation to geographic or temporary suspensions of service. In addition, Telefónica is one of only four telecommunications companies that publicly committed to defend the principle of net neutrality.

Finally, in the Privacy section the company ranks second in its sector, standing out for the detailed information in the Privacy/Transparency Centers on how, why and when personal data are collected, used and stored so that customers are empowered to take control of their data. In addition, special mention is made of the greater transparency regarding security policies and processes in both the Integrated Report and the Security Center. 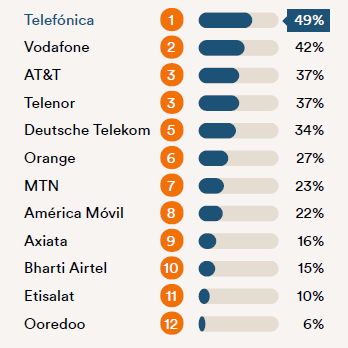 Ranking Digital Rights (RDR) is a non-profit initiative of New America’s Open Technology Institute and annually produces the Corporate Accountability Index, which ranks the world’s most powerful Internet, mobile ecosystem and telecommunications companies. The ranking was born in 2015, evaluating 16 entities. The 2020 edition includes 26 companies – 12 of them Telco – whose products and services are collectively used by billions of Internet users worldwide. RDR advocates for companies to continue to work towards respecting people’s digital rights, and publishes recommendations to companies and governments in this regard.

Telefónica is one of the world’s leading telecommunications service providers. The company offers fixed and mobile connectivity services, as well as a wide range of digital services for individuals and businesses. It is present in Europe and Latin America, where it has more than 341 million customers.