Telefónica to integrate Netflix service into its TV and video platforms

Telefónica to integrate Netflix service into its TV and video platforms 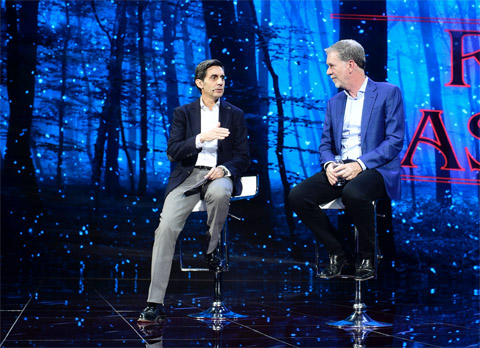 The partnership covers Europe and Latin America. Implementation of the agreement will vary according to each market.

Just had a call with @reedhastings, the CEO of @Netflix. I think @Telefonica customers are going to love this announcement, right Reed? 😉 pic.twitter.com/kfhzH2M8bQ

Madrid/Los Gatos, Calif., May 24, 2018. Netflix Inc. (NASDAQ: NFLX), the world’s leading Internet entertainment service, and Telefónica (NYSE: TEF:US), one of the largest providers of integrated telecommunications services in Europe and Latin America, announced a global partnership to integrate Netflix’s service into Telefónica’s TV and video platforms in these two regions.

“This agreement is a big step forward in Telefónica’s bet on open innovation and collaboration with leading companies around the world”, said José María Álvarez-Pallete, Executive Chairman of Telefónica. “We want to offer our customers the most compelling video offering possible, whether it’s our own content or third party providers. The partnership with Netflix will significantly enhance our existing multichannel video platforms.”

“Over the next several years, our partnership with Telefónica will benefit millions of consumers who will be able to easily access their favorite Netflix shows, documentaries, stand-ups, kids content and movies across a range of Telefonica platforms”, said Reed Hastings, Netflix co-founder and Chief Executive Officer. “Making Netflix available on Telefónica’s familiar, easy-to-use TV and video platforms enables consumers to watch all the content they love in one place.”

The global partnership was announced through a video shared on twitter by José María Álvarez-Pallete and Reed Hastings.

Each country will communicate the commercial details as and when they are available in their markets. First launches in Latin America will be announced in the next few weeks. Launch in Spain planned for the end of 2018.

Telefónica is one of the largest telecommunications companies in the world by market capitalization and number of customers with a comprehensive offering and quality of connectivity that is delivered over world class fixed, mobile and broadband networks. As a growing company, it prides itself on providing a differential experience based on both its corporate values and a public position that defends customer interests.

The company has a significant presence in 17 countries and 357 million accesses around the world. Telefónica has a strong presence in Spain, Europe and Latin America, where the company focuses an important part of its growth strategy.

Netflix is the world’s leading internet entertainment service with 125 million members in over 190 countries enjoying more than 140 million hours of TV shows and movies per day, including original series, documentaries and feature films. Members can watch as much as they want, anytime, anywhere, on nearly any internet-connected screen. Members can play, pause and resume watching, all without commercials or commitments.