Telefónica reinforces its commitment to the “European Grand Coalition for Digital Jobs” to boost innovation, digital education, and entrepreneurship

- Telefónica pledges to significantly increase the number of jobs created by projects linked to the Telefónica Open Future_ program in the next few years, as well as to accelerate an average of...

– Telefónica pledges to significantly increase the number of jobs created by projects linked to the Telefónica Open Future_ program in the next few years, as well as to accelerate an average of 150 projects a year from its Wayra initiative, and back up to 400 startups projects per year in the crowdworking spaces, among other initiatives.
– Telefónica believes that digital education plays a key role to ensuring employability, increasing the competitiveness of countries, and guaranteeing future growth.
– A total of 59 companies from eleven European nations participated, onsite an online, in the inaugural Digital Job Fair that this time takes place in Madrid, with the goal of filling more than 800 ICT jobs with qualified Spanish professionals. 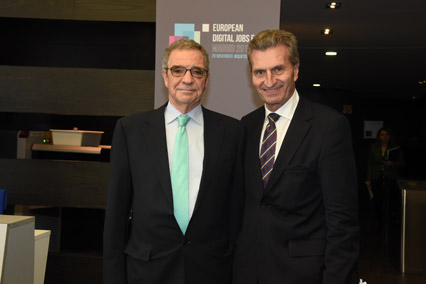 Madrid, November 20, 2015.- Telefónica today reinforced its commitment to the European Grand Coalition for Digital Jobs in order to boost innovation, digital education, and entrepreneurship. This announcement took place during the first European Digital Job Fair –celebrated today at the Distrito Telefónica, the company´s headquarters in Madrid.

Against the current digital revolution backdrop, Telefónica’s renewed commitment with this European initiative is in line with its global vision of clearly advancing towards the “economy of knowledge” in all aspects of education and in all sectors.  This implies incorporating digital into all stages of learning throughout life in order to adapt competencies to the new needs, boost employability, and increase the competitiveness of the countries.

With this in mind, Telefónica has launched several projects ranging from initiatives that boost all stages of digital education throughout the academic journey.  These include intensive training in digital matters and greater development of STEM subjects as well as an ability to create entrepreneurial ecosystems that are able to detect and promote talent development from the early right through to advanced stages.

As one of the founding partners and collaborator of the Grand Coalition for Digital Jobs, Telefónica has reinforced its goals in this space with the following priorities:

All of this is in addition to the activities carried out so far across 17 countries that include investments in 600 startups through the Open Future program; approximately 2,500 scholarships for young students through Talentum; more than four million students receiving education through the Telefónica Educación Digital platforms, which boasts the creation of more than 40,000 hours of digital content every year. Also, more than 5,000 young people were trained in the last year alone by Telefonica Foundation’s employability program, through the ‘lanzaderas’ initiatives, vocational training and Think Big. In total, all the educational and employability programmes of Foundation have so far benefited over 30,000 young people.

Additionally, Telefónica is working on analysis of the digital infrastructures and the access to said infrastructures of more than thirty countries, and their relationship to the entrepreneurial ecosystem.  The links between these variables, and how they contribute to the development of the digital economy, will form the basis of the Telefónica Index on Digital Life (TIDL), a report that the Company will be unveiling in the near future.

The goal of the European Digital Job fair – organized by Digital Europe – is to narrow the gap in digital education that currently exists in Europe in order to fill the thousands of vacant ICT positions in European countries.

During his keynote, Günther Oettinger, Commissioner for the Digital Economy and Society said that “it is unacceptable to see mass unemployment of young people whilst 40% of all companies trying to recruit ICT professionals in Europe report difficulties to find qualified workers. Something’s wrong there. This is a waste of human talent Europe can no longer afford.”

Carlos López-Blanco, Global Director for Public Affairs and Regulation at Telefónica, emphasized the importance of “adapting the competencies and capabilities of today’s youths to the new digital and technological profiles that companies, administrations, and society in general needs, immersed in the challenges of a changing environment”, and in this sense he has prioritized “education as the seed of innovation, and therefore, of future growth”.

The European Job Fair was also attended by distinguished guests including the Secretaries of State for employment, Juan Pablo Riesgo; and for Telecommunications and the Information Society, Víctor Calvo-Sotelo.

At its stand in the Job Fair, Telefónica showed the wide range of company initiatives encompassing all stages of education, practical and professional entrepreneurship of the startup and development business lifecycle.

The first European Digital Jobs Fair brought together in Madrid, both in person and online, 59 companies from eleven European nations, offering more than 800 qualified jobs.

This initiative was carried out in collaboration between two branches of the European Commission: EURES and the “Grand  Coalition for Digital Jobs” and has been organized by DIGITALEUROPE, the European technological association part of AMETIC, with the goal of putting qualified Spanish professionals in touch with European companies from Great Britain, the Netherlands, Germany or Spain, among other countries, who are seeking to fill vacancies.

Among the participating companies at the event: Amazon and JP Morgan for the United Kingdom, German information security company KuppingerCole; Dutch companies such as TomTom and Booking.com; as well as Telefónica and the Spanish subsidiaries of Accenture or IBM.