- The three companies, which already have an agreement to promote open innovation, will also open three crowdworking spaces in Beijing, Madrid and Shanghái. - Twelve startups have presented their projects to more than 400 international investors at the Open Future Showcase in Barcelona that was inaugurated by José María Álvarez-Pallete, Chief Operating Officer of Telefónica. - Telefónica Open Future already has a portfolio of more than 500 companies and 300m euros under management. 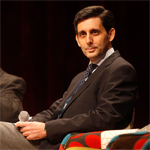 – The three companies, which already have an agreement to promote open innovation, will also open three crowdworking spaces in Beijing, Madrid and Shanghái.
– Twelve startups have presented their projects to more than 400 international investors at the Open Future Showcase in Barcelona that was inaugurated by José María Álvarez-Pallete, Chief Operating Officer of Telefónica.
– Telefónica Open Future already has a portfolio of more than 500 companies and 300m euros under management.

Mobile World Congress, Barcelona, March 3 2015- Telefónica Open Future, the open innovation programme by Telefónica; China Unicom, one of the largest Chinese carriers; and Tsinghua Technology and Innovation  (THTI), the technological innovation platform of renowned Tsinghua University, today announced the launch of a joint global call to detect and accelerate innovative startups to develop projects of common interest to the three companies in the Internet of Things (IOT) space.

The announcement was made during the first Telefónica Open Future Showcase inaugurated by José María Álvarez-Pallete, chief operating officer of Telefónica, and was held as part of Four Years From Now (4YFN) – parallel event at Mobile World Congress in Barcelona aimed at the international entrepreneur ecosystem.

The alliance will select and accelerate 10 projects helping them to expand their businesses by leveraging the resources and scale of Telefónica, China Unicom and THTI. Together they offer services to more than 791 million customers and operate an entrepreneurship support network that expands across three continents.

“With the involvement of  China Unicom and THTI, this is one of the most significant agreements Telefónica Open Future has signed at an international level because it brings the Chinese entrepreneurship ecosystem closer to those of Europe and Latin America”, said José María Álvarez-Pallete at the opening of the Telefónica Open Future Showcase. “With this alliance and the joint global call that we are launching today, we will offer startups in these three regions the support they need to grow, think differently and take their business to new heights. We are not only offering these startups work spaces, resources and financing but also commercial opportunities building on the clients and extensive networking opportunities of the three companies”

The selected startups will benefit from a network of incubators and accelerators that the three companies have in 17 countries alongside a guaranteed space in any of the three newly created crowdworking spaces that are specifically dedicated to this alliance in Madrid, Beijing and Shanghai.

Each startup will take advantage of a customised programme focused on the acceleration and development of its business according to the degree of maturity and growth potential.  The program will include office spaces in the new markets, pilots in the R&D departments of the companies, privileged access to sources of investment and great networking opportunities.

Telefónica, China Unicom and THTI have been collaborating since June 2014 when they signed an agreement to promote a global platform for open innovation by sharing their sources of innovation and resources. Today’s announcement is a step forward in that collaboration whereby the companies, in addition to searching for internal synergies between their portfolios, now search for new talent. The collaboration has already helped startups from Telefónica’s Open Future programme reach agreements with Chinese companies and likewise Chinese startups have been able to leverage Telefónica’s operations around the globe.

12 startups that encompass some of the initiatives that make up Telefónica Open Future (Wayra, Amérigo, Telefónica Ventures and company partners, among others) have presented their projects to an audience of more than 400 international investors at 4YFN, an event for entrepreneurs and innovation that is currently being held as part of the Mobile World Congress in Barcelona.

The startups presenting were from Asia, Europe and Latin America at various states of maturity, and working in a variety of different fields. As José María Álvarez-Pallete pointed out during his speech at the 4YFN event, these startups reflect the spirit behind Open Future.

“Telefónica has been a pioneer in supporting entrepreneurship and innovation through various different initiatives in the markets where we operate. Open Future represents a step forward – we want to reach more youngsters, generate a greater impact and play a bigger role in contributing to economic change as more and more industries become digitised. This is only possible with the support of public and private partners willing to share forces, resources and experience”, he pointed out.

Through Wayra, Telefónica Ventures and Amerigo, the three technology investment tools which are part of the programme, Telefónica Open Future has 300 million euros under management, built a portfolio of around 500 companies and generated more than 5,000 jobs. The programme is present in 17 countries and collaborates with 60 partners around the world.