Telefónica leads, for the first time, the telecommunications industry of the 2019 Ranking Digital Rights Corporate Accountability Index, which assesses transparency and commitment of technology and communication companies regarding privacy and freedom of expression. With 57 points, the company ranks first among the 12 companies assessed and is the entity that has improved the most in the last two years, rising 24 points. 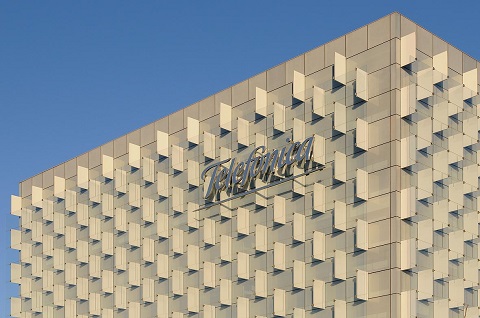 Madrid, 16 May 2019-. Telefónica leads, for the first time, the telecommunications industry of the 2019 Ranking Digital Rights Corporate Accountability Index, which assesses transparency and commitment of technology and communication companies regarding privacy and freedom of expression. With 57 points, the company ranks first among the 12 companies assessed and is the entity that has improved the most in the last two years, rising 24 points.

Ranking Digital Rights (RDR) is a non-profit initiative that works with an international network of partners to promote greater respect for people’s digital rights. Based upon 35 indicators this report analyses policies and processes implemented in companies to ensure respect for the rights of privacy and freedom of expression. It focuses on three categories: governance, freedom of expression and privacy. According to RDR, “people have the right to know and companies have the responsibility to show“, which is the purpose of the initiative in which Telefónica ranks first.

With regard to governance, Telefónica leads the ranking of both telecommunications companies and Internet companies, standing out – according to RDR – for its transparency in the monitoring of human rights management at the highest level and for its accessibility to its complaints mechanisms. In regard of customers’ data protection, it stands out for the improvement made internally to reinforce its government model for the correct management and protection of personal data.

As for freedom of expression, the company leads the telecommunications sector. The multinational, which publishes an annual Transparency in Communications Report, has made “great strides” in transparency regarding the requirements of the responsible authorities that affect users’ freedom of expression. In addition, this index highlights Telefónica’s commitment to the right to digital neutrality to ensure an open Internet experience, without restrictions or discrimination throughout the whole value chain: devices, content, services, applications, and networks. This right is enshrined in its Manifesto for a New Digital Deal.

Finally, the company ranks second in its industry regarding privacy. Of the aspects analysed by the index, the Spanish company has substantially improved its management of user information.

As a member of the Global Network Initiative, Telefónica reinforced its Global Privacy Policy in 2018 and already has online Privacy Centres in eight countries, with the aim of extending them to all its operations. In addition, it carries out a periodic assessment of the impact of its activity on human rights. It has also been one of the first companies in the world in approving a set of Ethical principles in the use of Artificial Intelligence, which affect aspects such as privacy, security, and human rights. 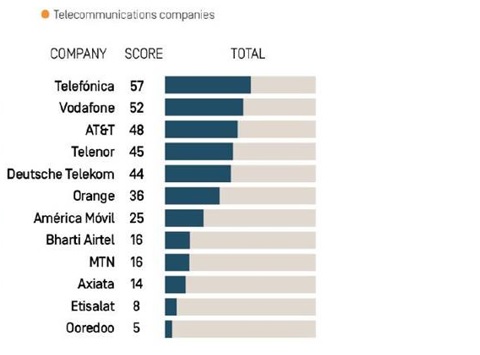 Evolution of the telecommunications sector in RDR 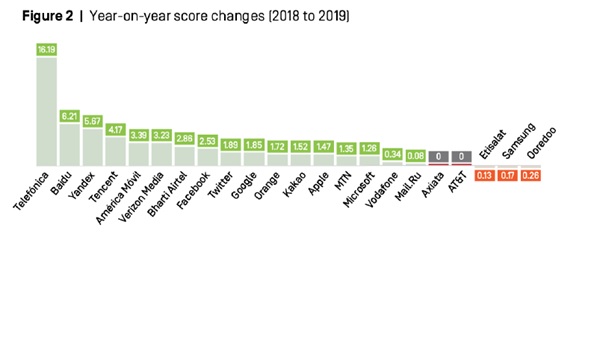 Ranking Digital Rights (RDR) is a non-profit initiative of the New America’s Open Technology Institute and annually produces the Corporate Accountability Index, which ranks the world’s most powerful Internet, mobile ecosystem and telecommunications companies. The ranking was born in 2015, assessing 16 entities. The 2019 edition includes 24 companies -12 of them Telco- whose products and services are collectively used by more than half of the world’s 4.3 billion Internet users. RDR advocates that companies continue to work for the respect of digital rights of people and publishes recommendations to businesses and governments in this regard.