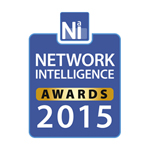 Telefónica NFV Reference Lab aims to help the ecosystem of partners and network equipment vendors to test and develop virtualized network functions with the upper layers of orchestration of services. Its aim is to promote interoperability and provide a more open ecosystem so that telecommunications providers adapt and expand their network services more easily.

The laboratory implements a network virtualization framework based on the approach of ETSI ISG NFV as a practical setup for testing. The award refers to the platform developed, composed of a simplified NFV Orchestrator, aware of Virtual Network Functions requirements, that enables a deterministic mapping of CPU and memory. The NFV Reference platform includes a NFV ready VIM (Virtual Infrastructure Manager) based on open source software running on standard Intel-based servers.

The award, which was granted in an event on March 3 and whose jury is composed of leading analysts in our sector, was picked by the team of the Direction of Network Innovation and Virtualization of Telefónica I + D-Global CTO. Other companies as Overture, Akamai and Saguna have been awarded too in other categories.