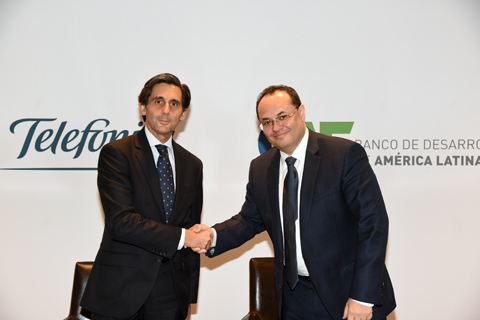 Madrid, October 18, 2017.- Telefónica and CAF –development bank of Latin America– have reached a strategic collaboration agreement so that the two entities can work together to promote programs, projects and initiatives aimed at developing digitalization in the Latin American countries in which they both operate.

This alliance has an initial applicability of three years (October 2017-October 2020), and it opens up a framework of institutional collaboration to promote the programs and projects that are already being developed individually or together with other public-private entities. At the same time, it promotes new joint initiatives that will be defined that effectively contribute to the economic and social development of countries in the region.

The agreement was signed today at Telefónica’s corporate headquarters in Madrid by the Chairman & CEO of Telefónica, José María Álvarez-Pallete, and the President of CAF, Luis Carranza.

As part of this framework, three strategic lines of action have been defined that will be developed through specific projects. First of all, the alliance places emphasis on “Internet for all”. This involves the development and support for initiatives that accelerate Internet connections in disconnected communities and areas of Latin America, as well as those that already have basic telecommunications services.

Along these lines, one of the specific projects involves transforming the productive structure of Latin America through actions that help to accelerate the intensive use of digital technologies in the production processes of the industrial fabric of the region.

Finally, the third line of action established focuses on actions for institutional cooperation and sharing knowledge through the joint development of studies, reports and organized activities for and on Latin America in the institutional environment between Spain and Latin America.

After signing the agreement, Luis Carranza, Executive President of CAF, placed special emphasis on the importance of having Telefónica as a strategic ally to “promote the productive transformation of Latin American, through programs that encourage innovation, investigation and the use of new technologies, essential factors for sustainable development and regional integration.”

The Chairman & CEO of Telefónica, José María Álvarez-Pallete, was delighted to have CAF as a strategic ally in developing investment and digitalization in Latin America: “This agreement is a clear example of the type of public-private alliances that are key for the Latin American region to take a qualitative step forward, by encouraging investment in development and digital transformation projects. With this agreement, Telefónica and CAF become strategic allies for this type of projects.”

Telefónica is one of the largest telecommunications companies in the world by market capitalization and number of customers with a comprehensive offering and quality of connectivity that is delivered over world class fixed, mobile and broadband networks. As a growing company it prides itself on providing a differential experience based both on its corporate values and a public position that defends customer interests. With more than 346 million accesses around the world, Telefónica has a strong presence in Spain, Europe and Latin America, where the company focuses an important part of its growth strategy. Telefónica is a 100% listed company, with more than 1.5 million direct shareholders. More information at: www.telefonica.com

CAF is a development bank created in 1970 and made up of 19 countries – 17 in Latin America and the Caribbean, Spain and Portugal– and 13 private banks from the region. It promotes a sustainable development model and regional integration through credit operations, non-reimbursable resources and support in the technical and financial structuring of projects in the public and private sectors of Latin America. It is one of the main sources of multilateral financing and an important generator of knowledge in the region. More information at www.caf.com