Telefónica and ACCIONA sign agreement for renewable electricity supply in 2018

ACCIONA will provide 71.6% of the telecommunications company's high-tension remote-metered power consumption in Spain in 2018, a total of 430 GWh. Telefónica takes another step to... 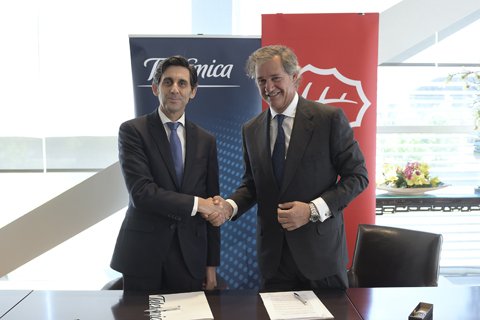 Madrid, June 8th, 2017.- José María Álvarez-Pallete, chairman of Telefónica, José Manuel Entrecanales, chairman of ACCIONA, signed an agreement today under which ACCIONA will supply the bulk (71.6%) of the high-tension remote-metered power that Telefónica will consume in Spain next year, which will be 100% renewable.

Telefónica awarded ACCIONA Green Energy Developments, the subsidiary of ACCIONA Energy that engages in electricity supply, the contract to supply power to 83 major locations, including data processing centres, offices and other installations of Telefónica in Spain, with an estimated power consumption of 430 GWh in total.

Like all the power supplied by ACCIONA, the electricity delivered to Telefónica will be certified 100% renewable by Spanish National Commission for Markets and Competition (CNMC). The use of clean energy will avoid the emission of about 413,000 tons of CO2 (from coal-fired plants), which is the main cause of global warming and climate change.

With this agreement, Telefónica will fulfil one of the key points in its Renewable Energy Plan, namely the commitment to buy mainly renewable energy from domestic sources.

Telefónica already obtains 44% of its total worldwide electricity consumption from renewable sources, equivalent to the electricity consumed annually by 203,749 households. The company has doubled its use of renewable energy, which accounted for 21% of its power consumption just a year ago, and accelerate fulfilment of the goals it established in order to contribute to the Paris Agreement: to achieve 50% by 2020 and 100% by 2030, coupled with a reduction in energy consumption.

The company already obtains 79% of its energy consumption in Spain from renewable sources; that figure is 100% in the United Kingdom and Germany. The company estimates that, when its energy supply is 100% renewable, it could save up to 6% on its total energy bill, equivalent to 1.4% of its current revenues.

This contract expands ACCIONA’s supply of electricity to large accounts in the Iberian market, where it is already a significant player and the largest renewable-only supplier. This year it has undertaken to supply 5 TWh of electricity in this segment, and expects to expand by 18% next year.

It belongs to ACCIONA, a leading developer of sustainable infrastructure solutions and renewable energy projects worldwide. Its range of services covers the entire design, construction, operation and maintenance value chain. ACCIONA reported revenues of 5.977 billion euros in 2016, with a presence in more than 30 countries, and it conducts its activity based on a commitment to contribute to the economic and social development of the communities in which it operates. ACCIONA’s aim is to lead the transition to a low-carbon economy, by applying criteria of quality and innovation processes to all its projects with a view to achieving efficient use of resources and caring for the environment.www.acciona.com

Telefónica is one of the largest telecommunications companies in the world by market capitalization and number of customers, with a comprehensive offering and quality of connectivity that is delivered over world-class fixed, mobile and broadband networks. The company has a significant presence in 21 countries and over 350 million accesses around the world. Telefónica has a strong presence in Spain, Europe and Latin America, where the company focuses an important part of its growth strategy.

Telefónica is 100% investor-owned, with more than 1.5 million direct shareholders. It is listed on the Spanish, London, New York, Lima, and Buenos Aires stock exchanges.