Telefónica accelerated revenue growth and earned €1,344m in the first nine months of the year 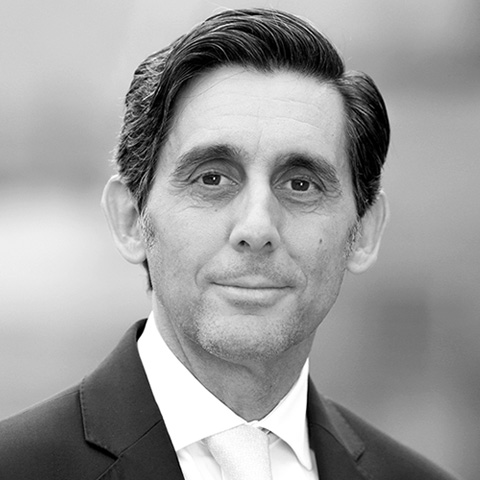 “Telefónica continued to post solid & profitable revenue growth in a quarter marked by a strong performance in our main markets, Spain, Brazil, Germany and UK. We continued to generate very strong free cash flow, up 40% year-on-year in the first nine months of 2019, driving a reduction in net debt for the 10th consecutive quarter.

We made good progress on key strategic initiatives to simplify our business this quarter, including a workforce restructuring program in Spain. We are forging ahead with plans to monetise further our mobile telco infrastructure, making a more efficient use of our networks by sharing them, whilst adding new partners to enrich the value of our commercial offer in the home.

Telefónica remained focus on deploying next generation networks in our markets, improving our 4G coverage and launching 5G selectively, as we have in the UK. Looking ahead, we reiterate our guidance for this year and are confident that our digital transformation will boost returns and deliver the best technological solutions for our customers.”

Telefónica today presented its results for the January-September period, which stand out for the return to reported growth in revenues in the third quarter, thanks to the improvement in Spain, Brazil and Germany, and the strong performance of the United Kingdom, despite of the negative impact of currencies. Telefónica advanced in the deployment of ultrafast networks and reduced net debt for the tenth consecutive quarter. The company reiterates all the objectives set for the year, as well as the dividend corresponding to 2019. 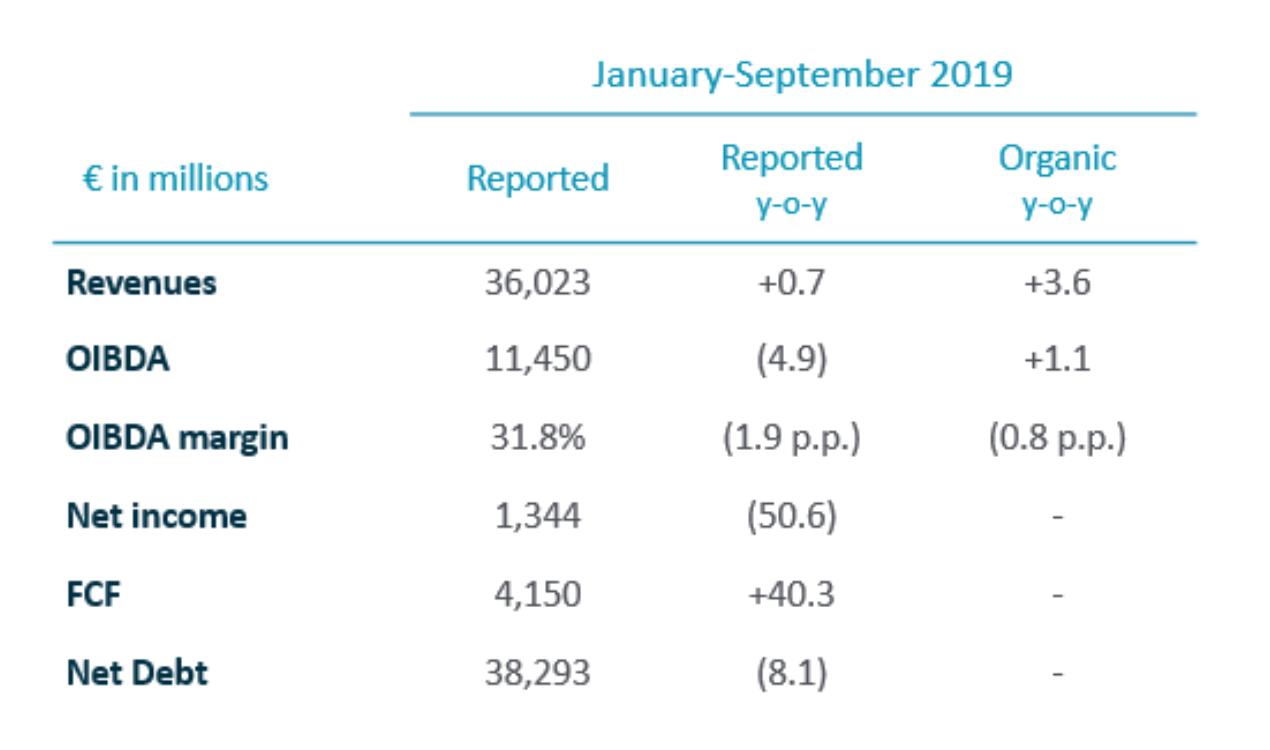 Telefónica Group’s access base stood at 345.8m at September 2019, virtually stable y-o-y excluding changes in the perimeter. The continued quality improvement of the customer base explained the growth in average revenue per access (+4.3% y-o-y organic; +4.7% in January-September), while churn improved 0.2 p.p. both y-o-y and q-o-q. 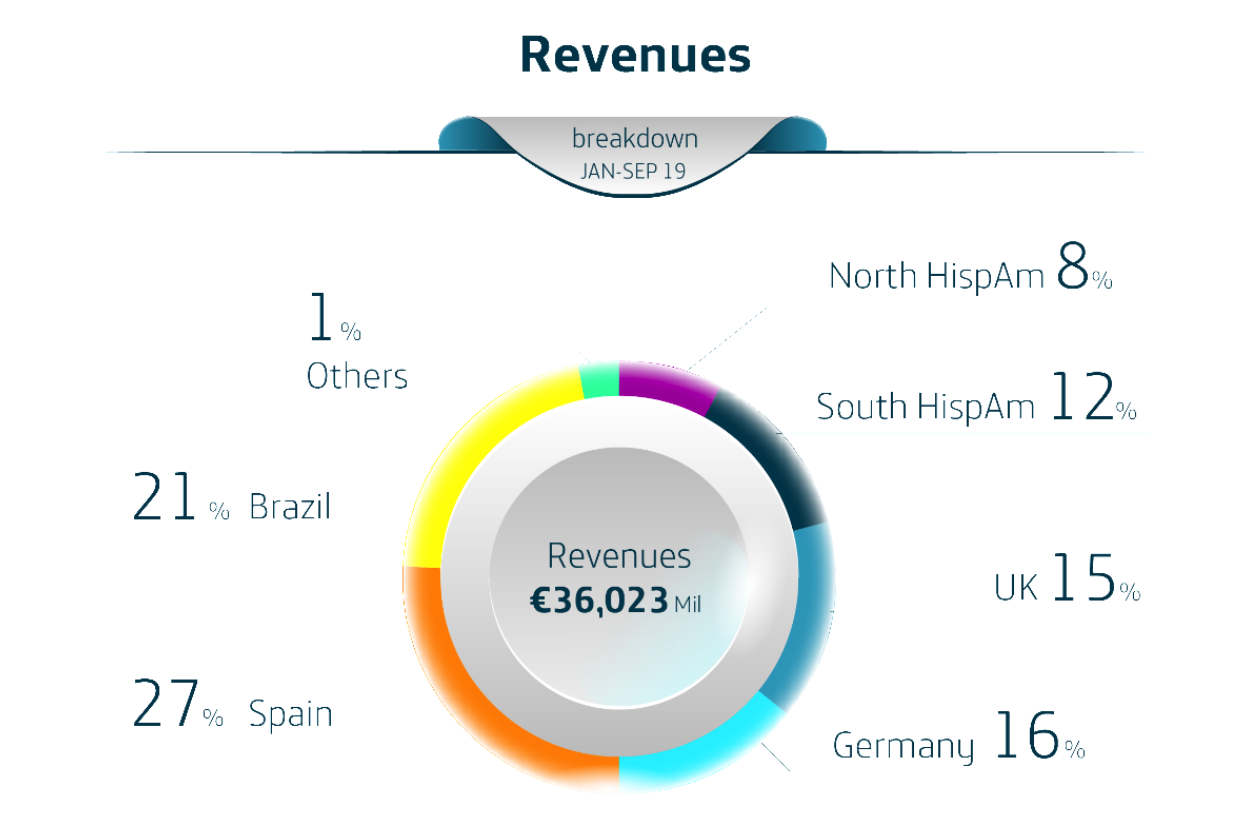 Revenues coming from broadband connectivity and services beyond connectivity accounted for 55% of the total (+2 p.p. y-o-y), reflecting the transformation of the revenue mix and increasing business sustainability, while voice and access decreased by 3 p.p. to represent less than a third of the total.

In the third quarter, provisions for restructuring costs amounted to €1,876m (€34m in the same period of 2018), mainly in Spain (-€1,732M). These provisions did not impact free cash flow generation in the quarter and were carried out within the company’s transformation and simplification process, which shall enable the generation of incremental savings and efficiencies with a positive impact on cash generation.

Exchange rates negatively affected the Company’s reported results for January-September 2019, mainly due to the depreciation of the Brazilian real and the Argentine peso against the Euro. In the third quarter, foreign currencies reduced y-o-y revenue growth by 2.0 p.p. and OIBDA by 1.5 p.p. mainly due to the evolution of the Argentine Peso, though the trend improved sequentially on better y-o-y comparison of the Brazilian real against the Euro (-3.7 p.p. and -3.2 p.p. respectively in the first nine months).

CapEx in January-September was €6,657m (+17.2% y-o-y) and included €1,465m of spectrum (€1,443m in the third quarter of which €1,425m in T. Deutschland, with no impact on free cash flow in the period following the approval of a deferred payment schedule). Capex continued to focus on accelerating excellent connectivity, deployment of LTE and fibre networks, increased network capacity and virtualisation and improving quality and customer experience (implementation of AI in the Company’s technology platforms).

In January-September 2019, the financing activity of Telefónica amounted to €6,899m equivalent (without considering the refinancing of commercial paper and short-term bank loans) and focused on maintaining a solid liquidity position and refinancing and extending debt maturities (in an environment of low interest rates). As of the end of September, the Group has covered debt maturities for the next two years. The average debt life stood at 10.7 years (vs. 9.0 years in December 2018).

Telefónica made progress in the digital transition towards sustainable and profitable growth, upgrading its network infrastructures and providing excellent connectivity in speed, coverage and security. The Group’s fibre and cable (FTTx/cable) network reached 123m of premises passed (54.5m own network; +11% y-o-y) and LTE coverage already reached 79% (+2.3 p.p. y-o-y; 95% in Europe and 73% in Latin America). Fiber investment is key for Telefonica and will allow revenues generation and efficiencies by capturing savings thanks to copper networks shutdown plans.

The Group achieved 80% of the 2019 savings targets (>€340m on top of >€300m achieved in 2018) in the first nine months of the year, thanks to the E2E Digital Transformation programme. The main drivers for the transformation were the improved digital experience in sales process, the digitalisation of customer services and the process automation.

Telefónica España grew 1% in revenues thanks to a better convergent ARPU (+1.7% up to € 90,6): The pace of growth in service revenues accelerated in the third quarter to +1.0% y-o-y (+0.7 p.p. vs. Q2 19) and OIBDA grew again in organic terms (+0.1%, +1.8 p.p. vs. the previous quarter). This performance reflects the differential offer of Telefónica España, based on growing convergent revenues (on a larger base and higher ARPU), business revenues and wholesale and others. The higher quality of the customer base fostered convergent ARPU growth to 90.6 € in the quarter (+1.7% y-o-y).

Revenues in the quarter (3,218M€) accelerated their growth to 1.0% y-o-y (+0.7p.p. vs. Q2), thanks to the improved performance of service revenues (+1.0%; +0.7 p.p. sequentially). Revenues from handsets increased 0.3% y-o-y. Revenues grew in all segments compared to 3Q18. Operating expenses in July-September were impacted by the recognition of a provision of €1,732m in personnel expenses, mainly associated with the 2019 voluntary redundancy plan, and, in addition, with the headcount reskilling programme and the update of estimates from the previous plan. This new suspension plan will generate close to 210M€ of recurring direct savings from 2020 in addition to those already captured with previous plans.

Telefónica UK, strong performance in main metrics: Telefónica UK continued posting a strong set of results in the third quarter, delivering healthy growth across all key financial metrics and all main segments of its customer base in a competitive market environment. The Company reiterated its market leading position and remained UK’s favourite mobile network with sector leading loyalty at 1.0%, supported by the continued success of its innovative propositions such as “Custom Plans”. Towards the end of the quarter and coinciding with the latest smartphone launches, Telefónica UK successfully introduced its first offer for customers seeking unlimited mobile data while providing upselling opportunities.

Telefónica Hispam Norte, high competitive intensity: Hispam Norte’s results showed similar trends to those seen in the previous quarter, and remained affected by the competitive intensity and by 2.5 GHz and 1,900 MHz spectrum commitments in Mexico, registered as OpEx instead of CapEx since Q4 18. Since 1st of September, and after the closing of its sale, Telefónica Panamá was no longer consolidated (Nicaragua since 1st of May and Guatemala since 1st of January), the closing of the divestments in El Salvador and Costa Rica are still pending.

Definitions:
Organic growth: Assumes average constant foreign exchange rates of 2018, except for Venezuela (2018 and 2019 results converted at the closing synthetic exchange rate for each period) and excludes the hyperinflation adjustment in Argentina. Considers a constant perimeter of consolidation. Excludes the effect of the accounting change to IFRS 16, write-downs, capital gains/losses from the sale of companies, restructuring costs and material non-recurring impacts. CapEx excludes spectrum investments.

PRESENTATION OF RESULTS FOR THE THIRD QUARTER OF 2019

Telefónica accelerated revenue growth and earned €1,344m in the first nine months of the yearDownload