Telefónica’s net income increased by 10.6%, reaching 926 million euros in the first quarter of the year

“We have started the year by extending our leadership in fibre and 4G deployment, testing new 5G capabilities and making progress in the UNICA virtualisation programme, allowing us to continue gaining customer relevance through better experience and higher average lifetime.
The first quarter results showed a significant improvement in revenue growth trends and double-digit growth in net income and earnings per share. Strong cash generation, which was three times higher than the figure reported in the first quarter of the previous year, allowed for an acceleration in debt reduction, for the 8th consecutive quarter, further strengthening our balance sheet.

As a result, we reiterate the dividend and guidance announced for 2019”.

Telefónica today presented its financial results for the first quarter of 2019, showing an improvement in its growth trend, both in terms of revenue, net income and earnings per share. In addition, free cash flow has multiplied by 2.6 times compared to the first quarter of 2018, which allows accelerating the reduction of debt (-693M € in the quarter, around € -1.7bn additionally, including events after 31 March). 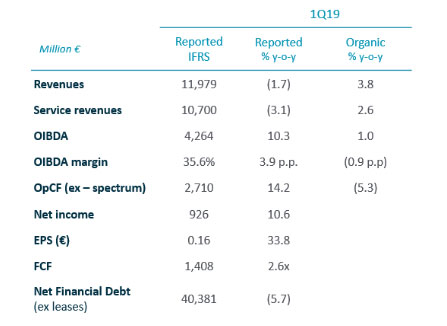 Telefónica Group’s access base stood at 352.4m at March 2019, stable y-o-y excluding changes in the perimeter. The average revenue per customer accelerated in the quarter to +4.2% y-o-y in organic terms (+3.8% in the previous quarter) while churn remained stable thanks to the strategic focus on high-value customers, which continued posting solid growth. 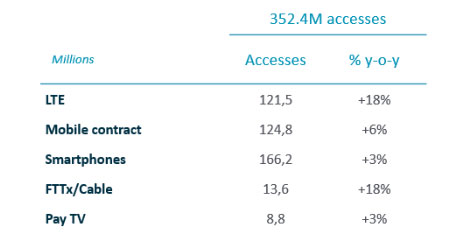 The company further advanced in the transformation process of its revenues, focused on data monetization and digital services, with revenues from broadband connectivity together with services beyond connectivity achieving 56% over total revenues in the first quarter (+3 p.p. y-o-y). 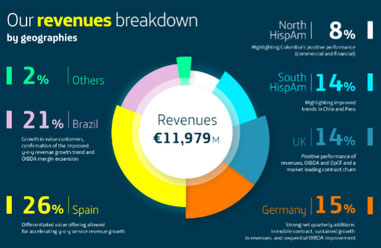 Operating expenses (€8,114m in January-March) decreased in the quarter by 4.9% y-o-y, affected by the application of the new standard IFRS 16 and FX evolution.

Reported variations of the consolidated financial statements for the first quarter 2019 reflected the adoption of IFRS 16 since 1 January 2019 (the statements for January-March 2018 were reported according to IAS 17). The organic variation excluded the impact of the accounting change to IFRS 16 in the first quarter 2019 (+€414m in OIBDA, -€384 in depreciation and amortisation, -€53m in net financial expenses and -€17m in profit attributable to ordinary equity holders of the parent company). The Consolidated Statement of Financial Position at 31 March 2019 included lease liabilities, including those held for sale, of €7,439m.

On the other hand, exchange rate evolution negatively affected the Company’s reported results mainly due to the depreciation of the Brazilian real and the Argentine peso against the euro. Foreign currencies reduced y-o-y revenues by 4.9 p.p. and OIBDA by 4.7 p.p. in the first quarter. However, the negative impact of the depreciation of currencies at the OIBDA level (-€180m in January-March) decreased significantly in terms of cash flow generation (-€74m).

CapEx reached €1,554m in January-March (+4.3% y-o-y) and included €18m from the spectrum in T. Centroamérica. In organic terms, CapEx increased by 11.2%, affected by different calendar of execution, and continued to focus on accelerating excellent connectivity (deployment of UBB networks, increased network capacity and virtualisation) and improving quality and customer experience (implementation of AI in the Company’s technology platforms).

Organic growth: Assumes average constant foreign exchange rates of 2018, except for Venezuela (2018 and 2019 results converted at the closing synthetic exchange rate for each period) and excludes the hyperinflation adjustment in Argentina. Considers a constant perimeter of consolidation. Excludes the effect of the accounting change to IFRS 16, write-downs, capital gains/losses from the sale of companies, restructuring costs and material non-recurring impacts. CapEx excludes spectrum investments. 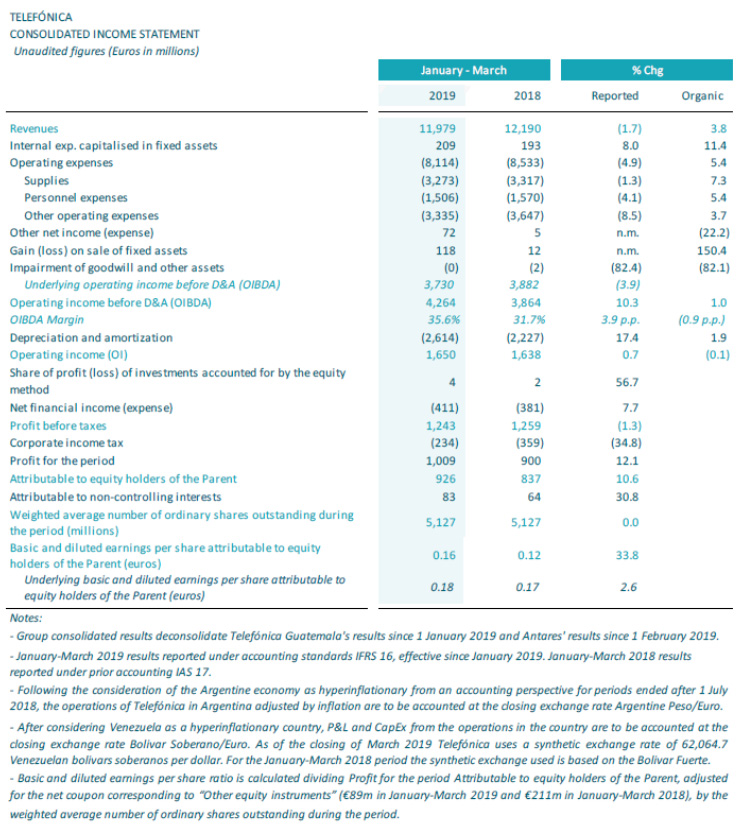 Net financial debt at March 2019 (€40,381m) decreased by €693m vs. December 2018 thanks to free cash flow generation (€1,408m) and net financial divestments mainly from the sale of Antares and T. Guatemala (€139m). In contrast, the factors that increased debt were: i) shareholder remuneration (€46m, including the replacement of capital instruments and coupon payments), and ii) labour-related commitments (€239m) and other factors for a net amount of €570m.

In January-March 2019, the financing activity of Telefónica amounted to approximately €4,437m equivalent (without considering the refinancing of commercial paper and short-term bank loans) and focused on maintaining a solid liquidity position and refinancing and extending debt maturities (in an environment of low interest rates). Therefore, as of the end of March, the Group hedged the debt maturity for the next two years. The average debt life stood at 10.2 years (vs. 9.0 years in December 2018).

The key to being relevant entails excellent connectivity based on network transformation, simplification and the application of Artificial Intelligence to the Company’s technology platforms.

The industrialisation of the fibre deployment and connection process is a clear competitive advantage in both Spain and Latin America. The Group’s FTTx/cable coverage reached 84.9m premises passed (51.8m in own network; +13% y-o-y; 21.8m FTTH in Spain, 20.0m in Brazil and 10.0m FTTx/cable in Hispam (+34% y-o-y)); and connected retail fibre accesses grew to 13.6m (+18% y-o-y). These ultrafast broadband accesses account for 63% of fixed broadband base (+9 p.p. y-o-y). In Spain, there are also 1.7m wholesale fibre accesses (x2 y-o-y) fostered by agreements with the main market operators. In LTE coverage reached 78% (+5 p.p. y-o-y; 95% in Europe and 72% in Latin America) and traffic accounted for 71% of the total. 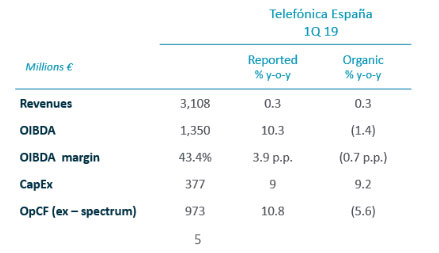 OIBDA in January-March stood at €1,350m (+10.3% reported), though it is affected by some factors eliminated from the organic variation: i) capital gains from the assignment of future rights linked to a portfolio of claims (+€103m); ii) provision for the restructuring of channels (-€23m) and iii) changes related to the adoption of IFRS 16 (+€64m). In organic terms, OIBDA decreased 1.4% y-o-y, with a sequential improvement of 3.0 p.p., explained by the significant reduction of the dragging impacts on wholesale revenues and motor content cost.

Telefónica Deutschland: strong trading performance. Telefónica Deutschland posted a strong commercial quarter. The Company has launched further value-added initiatives to enhance its ARPU-up and churn-down strategy. This includes O2 TV (from 2 May), O2 Cloud (from 8 April) and O2 VDSL (from 7 March). The O2 Free portfolio continues to drive usage and ARPU growth leveraging the improved network of the Company. 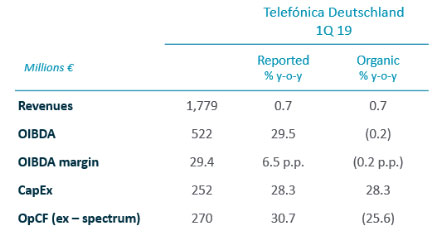 Revenues came in at €1,779m in Q1 19, +0.7% y-o-y supported by another quarter of strong consumer demand for handsets. OIBDA reached €522m in Q1 19, having a positive impact of €129m after the implementation of IFRS16 accounting change. OIBDA is down -0.2% y-o-y mainly due to regulatory headwinds, some upfront investments into the digital transformation program and some commercial investments. OIBDA margin decreased in Q1 19 by -0.2 p.p. y-o-y.

Telefónica Reino Unido: leading as UK’s favourite mobile network. Telefónica UK posted another good set of results in the first quarter, delivering growth in its main financials and overall customer base supported by the continued popularity of propositions such as “Custom Plans”. In addition, the Company continued to be the UK’s favourite mobile network with sector leading postpay churn at 0.9% and being recognised as “Best Network Performance” at Mobile News Awards and “Best Sponsorship of the last 25 years” for “The O2” at the UK Sponsorship Awards in March.

Revenues maintained a strong level of growth of 5.3% y-o-y to €1,691m mainly driven by the continued success of flexible tariff offerings such as “Custom Plans”, higher value handset sales, as well as ongoing growth in Smart Metering Implementation Programme (SMIP), MVNO and Business ICT. OIBDA totalled €504m in the quarter with the IFRS 16 accounting change having a positive impact of €55m. OIBDA growth of 3.4% y-o-y was mainly driven by ongoing healthy top-line performance which more than offset higher operating expenses. OIBDA margin decreased by -0.5 p.p. y-o-y. 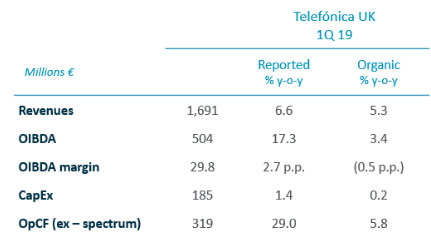 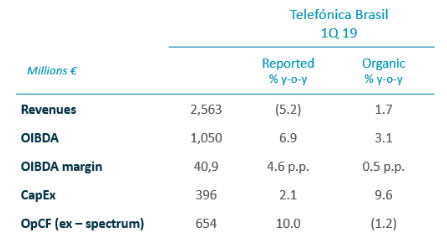 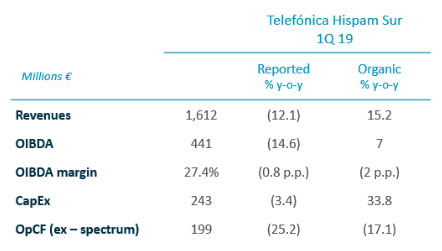 CapEx was €243m in the first quarter (+33.8% y-o-y, primarily as execution calendar was anticipated vs. the previous year in Argentina in a context of favourable exchange rates), mainly allocated for 4G and FTTx and cable network deployment.

Telefónica Hispam Norte: accelerating revenue growth in Colombia & Centroamérica. Hispam Norte, revenues in the first quarter of 2019 returned to positive y-o-y growth driven by Colombia and Central America’s growth, and the improvement seen in Mexico even despite the highly competitive intensity remained in the entire region. Likewise, commercial results (excluding Guatemala’s accesses in 2018 that, after the closing of its sale in January 2019, are no longer included in the consolidation perimeter) continued to present a solid growth in value accesses (contract, LTE and FTTx). 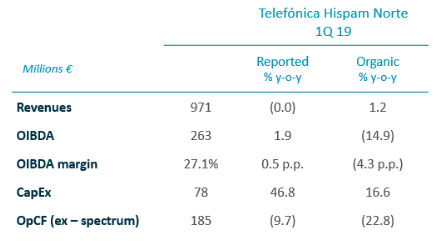 Revenues (€971m) increased 1.2% y-o-y in the quarter, mainly led by Colombia and Central America’s growth acceleration together with Mexico’s return to positive growth (for the first time in 5 quarters). OIBDA (€263m, €45m positive impact as a consequence of changes following IFRS 16 adoption) decreased 14.9% y-o-y in the quarter and OIBDA margin stood at 27.1% (-4.3 p.p. y-o-y), mainly affected by the spectrum commitments mentioned before and by the significant price drop in the Mexican market, partially offset by Colombia and Central America’s growth.

CapEx (€78m; +16.6% y-o-y) was primarily allocated to LTE and fibre networks coverage. It should be noted that the y-o-y change for the quarter cannot be extrapolated to the full year, given the different execution levels of investment in both years. In the quarter €18m was registered for 30 MHz spectrum renew in the 1,900 MHz in El Salvador. The operating cash flow (OIBDA-CapEx) decreased 22.8% when compared to the first quarter of 2018.