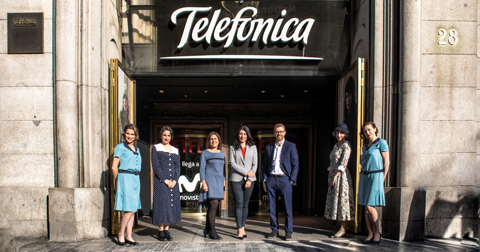 The agreement was announced in May by the Chairman and CEO  of Telefónica, José María Álvarez-Pallete, and the CEO of Netflix, Reed Hastings

Madrid, 10 December 2018.-The arrival of Netflix to Movistar is already a reality. From tomorrow, Movistar customers will have a new value proposition that incorporates advantages in the new Fusión package that includes Netflix, and that will give access to more mobile data consumption and an additional mobile line.

María Jesús Almazor, Managing Director of Telefónica España, and María Ferreras, Vice President of Netflix for EMEA business development, today presented the new proposal of integrating Netflix in the Movistar offer, through which customers can access Netflix with a new user experience.

This global agreement, which was announced in May this year through a video by the Telefonica Chairman and CEO, José María Álvarez-Pallete, and the CEO of Netflix, Reed Hastings, helps Telefónica to reinforce the goal of having the most complete content offer possible on all the company’s multi-channel platforms.

For María Jesús Almazor, “we want to offer our customers the best of our own and third party content. In the same way that we integrate channels, today we have taken another step by integrating a platform, entering a new world to provide customers with a simpler content consumption experience”.

“We want to bring the best entertainment to Spanish households and want people to enjoy their favourite series, films and documentaries. Today’s agreement and the new ability to easily access Netflix through the Telefónica platform makes this a reality”, assured María Ferreras, Vice President of Netflix for EMEA business development.

New Movistar package customers can access Netflix and enjoy all the series, films and documentaries such as Stranger Things, Narcos:Mexico, Cable Girls, The Christmas Chronicles, ROMA as well as content such as Arde Madrid, Gigantes, La Peste, Vergüenza, Velvet, which have already been successful in Movistar.

As of December 11, Fusión Total Plus, Total and Selection customers will be able to access new products which will include Netflix in HD or UHD quality. These packages also incorporate one more GB for each existing mobile line with unlimited data and an additional mobile line.

Current Movistar customers will have a special promotion that will allow them to access Netflix, for three months, at no additional cost. New customers who contract the Fusión Total Plus X2 package can also avail of a promotion and enjoy all the football, sports, series, films and Netflix, for 85 euros per month for three months. In any case will there be a commitment to stay.

The integration of Netflix to the Movistar+ interface provides the user with a new experience as Netflix can be accessed , both through the different sections of the interface and by searching.

Movistar customers who are also Netflix customers will just have to migrate their Netflix account to one of the Fusión packages that includes this content. For its part, Netflix users included in the new Fusión packages will have the same profiles, just as they have been configured until now, in addition to using the same remote control to search for contents on both platforms and having integrated payments in a single invoice.