José María Álvarez-Pallete: “We want to offer our customers a network that they can manage and adapt to their needs”

José María Álvarez-Pallete: “We want to offer our customers a network that they can manage and adapt to their needs” 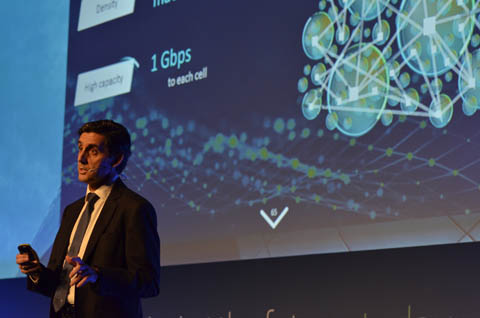 For two days, Telefónica brought together around one hundred analysts of the main Industry Analyst firms in the world, such as Gartner, Forrester, or Ovum, among others; as well as corporate customers and partners in its Analyst & Customer Day to inform them of the keys to the deep digital transformation process that the company has experienced, and how it is collaborating with other companies in that same process.

With the slogan “Designing the future today”, Telefónica highlighted its transformation into a digital platforms company, how it is virtualizing its networks ahead of the arrival of 5G, and how new technologies such as artificial intelligence or blockchain will continue to drive its transformation, as well as that of its corporate customers.

“We want our customers to not only buy capacity or access speed from us; we want to offer our customers a network that they can manage and adapt to their needs, a network with which they can interact and that can learn from them and, therefore, serve them better”, indicated José María Álvarez-Pallete, Chairman and CEO of Telefónica during the opening, who also highlighted that the company has become a “powerful provider of technology”.

Prominent executives from important areas of the company such as networks, digital services, big data, or innovation also intervened in the event which was closed by Ángel Vilà, COO of the company.

Telefónica also invited important corporate customers such as BBVA, Dufry, PepsiCo, or El Corte Inglés to participate. These customers explained specific cases regarding how network virtualization or the application of Big Data, for example, are helping to transform and grow their businesses.

Also among the companies invited to the event was the Colombian airline Avianca who announced that it has selected Telefónica to drive its digital transformation with the deployment of global digital and communications services in the company’s operations in 27 countries.

Telefónica and the mobile robotics engineering company ASTI Mobile Robotics also announced a collaboration agreement to drive the digitalization of the industrial environment processes through the Internet of Things (IoT).

The event, where Salesforce digital evangelist Vala Afshar gave a presentation, also served to explore the opinion of analysts and customers about some of the keys that will transform the telecommunications sector in the coming years. Thus, in a survey taken among the attendees, these indicated that:

More information about the conclusions of the attendees to Telefónica’s Analyst & Customer Day can be found here.

Blog
#NFC
What is NFC and what is it used for
Blog
#5G
When will 6G arrive and what progress will it bring?
Blog
#Public Policy
The spectrum and the goose that lays the golden eggs