José María Álvarez-Pallete: “Our sector has become an essential part of people’s lives”

Welcome speech at the inaugural session of the Mobile World Congress 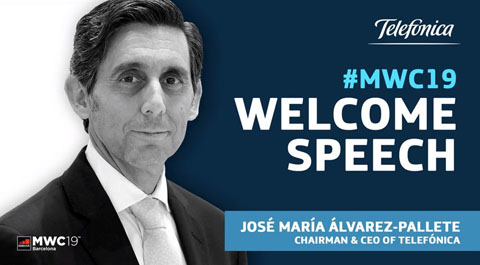 Welcome speech at the inaugural session of the Mobile World Congress

Barcelona, February 25nd, 2019.- “Our sector has become an essential part of people’s lives and this makes it very relevant”, said today José María Álvarez-Pallete, chairman and CEO of Telefónica at the opening key note of MWC, pointing out the key role connectivity plays in the new data economy with traffic increasing exponentially driven by the explosion of new technologies and services. “All these services will be possible thanks to telco infrastructure underpinning the digital world. Technology is amazing, but connectivity is awesome”.

“Does Competition theory say that Europe needs one mobile operator for every 1 million citizens in Europe?” he asked the audience calling for a refreshed and bold regulatory framework ahead of the deployment of 5G networks that will require telcos to invest heavily. Reminding attendees that telecoms is the most deflationary sector in Europe, he urged governments to rationally allocate spectrum and to award it for longer durations. He also hoped that the new Commission and Parliament in EU and the new Governments elected make the creation of a level playing field their number one priority.

The chairman of Telefónica also appealed to the responsibility of the industry and society to use data ethically and transparently. “Data can be a powerful source for good”, he added. In the new data economy, people need to trust how personal data is being used and have control over the data they generate. Álvarez-Pallete demanded a new Digital Bill of Rights that lays down fundamental rights in a digital future for all citizens. “We believe that the use of data must be secure and transparent, guided by strict values and ethical standards”, he stressed.

Within this framework of confidence generation through the transparent use of data, the chairman of Telefónica presented the first specification of data portability among operators, showcased for the first time at this MWC. This is one of the initiatives of the Data Portability Cooperation, a working group led by GSMA and including big European Telecommunications companies such as Orange, Deutsche Telekom and Telefónica.

The Group, established a year ago, collaborates in the definition of a common data portability standard, to further improve the right of users to take their personal data as described in the new General Data Protection Regulation (GDPR) that became applicable last May.

Its members agree that this portability process should safeguard the privacy and security of personal data while guaranteeing users control over it. But at the same time, it must allow companies to capture the opportunities offered by the upcoming data economy while respecting citizens’ rights over their data. Indeed, visitors at MWC will be able to find the first actual transference of personal data implemented between Orange and Telefónica, based on this first version of the specification, at Telefónica booth.

The Group presented a white paper analysing the impact of the GDPR on data management for operators and exploring ways of industry collaboration to develop new data based proposals that benefit the consumer. This paper can be found at http://www.dataportabilitycooperation.org/

Álvarez-Pallete closed his intervention praising Barcelona as a world’s class innovation and technological hub, one of the cities better prepared to face the technological future. “Telefónica is fully committed to turning this city into an European hub in the field of fifth mobile technology”, he emphasized.  “This is the start of a new era fostered by intelligent connectivity. Let’s make it real”, he concluded by saying.