Wayra: we want to break the rules!

Do you know what Wayra means? It means “wind” in Quechua and it is a recently new and innovative initiative launched by Telefónica.   Gonzalo Martín-Villa ,...

Do you know what Wayra means? It means “wind” in Quechua and it is a recently new and innovative initiative launched by Telefónica.

Gonzalo Martín-Villa, Head of Wayra initiative, explains to us the main drivers of this amazing project.

Wayra is the name of the initiative to accelerate the innovative business initiatives in the ICT world’s most ambitious in Latin America, with the aim of supporting talent where ideas are created. And not only that, we also want make them grow.

From the beginning, we know that there have been many doubts and preconceptions about the region and about our company:

• How to create start-ups in Latin America and managed by Latino entrepreneurs in a world dominated by Anglo-Saxon culture?

• Is it possible to keep the Latino talent in the region, but entrepreneurs have to seek support in countries “more developed”?

• Is a company Telefónica able to manage such an initiative in an environment that requires the assumption of risk, speed of execution and flexibility typical of start-ups?

In Wayra, we believe that the rules are not written, this is our main driver. Not in a demanding and ever-changing industry like ours. Here are our main beliefs:

We believe that the next technological revolution may originate in Latin America.

Latin America is a huge generator of ideas and talent. And from this belief Wayra was born. As an unprecedented initiative in the Latin American region, Wayra is trying to achieve a significant impact on the economy of the region. We put all our technological resources so that this potential can compete, on equal terms, with the best.

We believe that the development of technological innovation does not imply the migration of Latino talent to another geographical region.

Our job is to recognize that talent, drive it, providing the technology that only a leading company such as Telefónica can provide, but also the administrative tools, legal and management support, and funding necessary for entrepreneurs to focus on developing your idea.

Telefónica is the only company able to develop an initiative in Latin America and Spain in such a short time. In the last four months, we have launched the call for 7 centers Wayra. They have produced the first three Wayra Weeks to select from more than 2500 projects received. We hope to finish the year with 10 schools operating Wayra.

And in 2012 we will have the ability to launch 100 start-ups a year. And it is the most difficult and exciting: convert a large portion of these projects profitable and innovative companies.

Because we believe that when talking about the future of ICT, Latin America has much to say, and because we are convinced that the rules are not written, we know that the future of growth is based on helping to grow the talent that is around us. 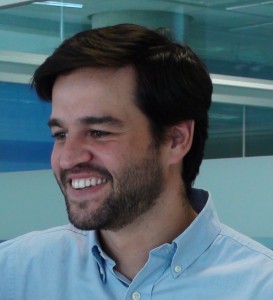